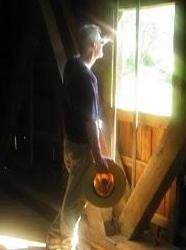 He earned his UCLA Ph.D. in English literature. His many interests include Irish language reception by English-language culture; Irish republicanism in literature; traditional Irish and contemporary rock music; and the presentation of otherworldly, liminal states in medieval and modern literature.

Dr. Murphy has been widely published in scholarly reference works, in literary studies, and on websites. He reviews books and music over a broad range of topics in print and online.

His current research into two areas, Samuel Beckett’s purgatorial ideas, and the invention of the concept of ”Celtic Buddhism,” typifies his eclectic direction, documented at Blogtrotter at http://fionnchu.blogspot.com.

The Musical Human: A History of Life on Earth

Instead of pursuing the Muse, we passively hear her.

The Worlds of J. R. R. Tolkien: The Places That Inspired Middle-earth

“Whether new to Middle-Earth or a veteran pilgrim, anyone will learn much in this book.”

Time Song: Journeys in Search of a Submerged Land

“The ruminations and peregrinations gathered up into this contemplative collection should motivate her readers to seek out her past forays into other forgotten corners of the earth, which r

The Catholic School: A Novel

Sensations: The Story of British Art from Hogarth to Banksy

“No matter whom Jones treats, he tells the tale of each artist with verve.”

The Ministry of Truth: The Biography of George Orwell's 1984

“For as Lynskey charts the admittedly astonishing reception of a narrative so adaptable as to be embraced by the Black Panthers and to be approved by the John Birch Society both, one wonder

Look Again: How to Experience the Old Masters

“Ward wants to break down any veil of time, any patina of history, and to confront these art works, to argue and quarrel with them.

The Four Horsemen: The Conversation That Sparked an Atheist Revolution

“What remains not unsaid but unresolved is the team’s final question: Is religion potentially, latently, or equally dangerous?”

“Rock Graphic Originals will enrich the mind and entice the eyes of any aficionado of a time when rock mattered.

The Rebels and Other Short Fiction (Irish Studies)

“This welcome debut collection of his Irish stories will find ready readers overseas.”

“The stories told by this voice fill in much, but not all. Limits to complete understanding persist, in the city of Belfast and in Samuel Orr's family.”

True Stories: And Other Essays

“In an age of dwindling attention spans for serious reflection and stimulating journalism, True Stories & Other Essays provides intelligence and verve.”

“Free of Vikings, Björk, or enraptured paeans to volcanic landscapes and icy shores, The Outlaw presents Iceland as experienced by a troubled boy.

“From Italy’s agricultural heartland, largely an autodidact, Walter Ferranini doubts the sincerity of claims for the dignity accorded labor by ideological spokesmen for the post-war communist regim

Lincoln in the Bardo: A Novel

Istanbul: City of Majesty at the Crossroads of the World

This city has captured headlines again this past year. Turkey’s tumult reminds readers of the position it occupies between East and West.

Land of Love and Ruins

Combining an Icelandic sensibility enriched by nature with a cosmopolitan immersion into complexity, this narrative blends a journal with semi-(at least) autobiographical reflections.

The Illusion of God's Presence: The Biological Origins of Spiritual Longing

“Rather than theological bickering or ‘irrelevant moral imperatives,’ Wathey reminds us of our humanism and our hubris.”

The Mark and the Void: A Novel

“reminds audiences of the human costs beneath the rise to fortune of a few manipulators of our money.”

The Wake: A Novel

“If you enter a few chapters deep into this novel, you hear and think and feel akin to the farmers and churls who found their language, their loyalty, and their land wrench

Where I’m Reading From: The Changing World of Books

“The Anarchist enlivens a violent, edgy period not so far away from the assassination of William McKinley by a deranged, misguided, idealist immigrants’ son . . .”

“His genial, heartfelt, but blunt tone may shake up those long wearied by gentler inspirational tales.”

The Book of Common Prayer: A Biography

“Alan Jacobs offers a handy introduction to the cultural and social effects . . . of this book . . .”

Holidays and Other Disasters

Death, American Style: A Cultural History of Dying in America

“Dr. Samuel comprehends our current, eternal difficulty with our common fate, unimaginable for many of us, always inevitable.”

We lack an ability to cope with death.

God in Proof: The Story of a Search from the Ancients to the Internet

“As a popularization of recondite argument, God in Proof mingles accessible explanations with a reporter’s fresh outlook.”

My Bright Abyss: Meditation of a Modern Believer

“Recommended for readers who prefer poetry and criticism to platitudes or self-help texts . . .”

The Vatican Diaries: A Behind-the-Scenes Look at the Power, Personalities, and Politics at the Heart of the Catholic Church

“One closes John Thavis’ perceptive study reflecting on the Vatican’s challenge: to persist in a secularizing world sometimes fascinated by the pomp and pageantry of St.

Why Priests? The Real Meaning of the Eucharist

“. . . will be welcomed by many capable of discerning wisdom within advanced argument—while undoubtedly opposed by certain powers that be.”

One for the Books

“In these pages, we glimpse the thousands of beloved or fondly despised books which, distilled into allusions, memories, and anecdotes, enrich the author’s life and our own.”

The Scientific Buddha: His Short and Happy Life (The Terry Lectures Series)

“. . . full of sly, scholarly challenges to the common wisdom peddled as dharma, karma, and nirvana.”

The Life of Objects

Beggar’s Feast, by its title alone, introduces a wry tone.

Raised from the Ground

The Graves Are Walking: The Great Famine and the Saga of the Irish People

“John Kelly conveys an impressive study of the firsthand accounts, the government reports, and the secondary scholarship within a well-paced, judicious presentation of what too often has be

On an Irish Island

“Robert Kanigel knits together a handsome pattern as he traces the inherent drama within the destinies on the page—and in recollection by themselves and others—of the Blasket Islanders.

The Story of Ireland

“In a history illustrating the importance of global ties for the Irish, its links to a European economy facing unprecedented challenges by its own unity serve as a cautionary tale: to be ca

The Beauty and the Sorrow

“Fourteen of the twenty people involved in these experiential accounts of WWI were in their twenties when the war broke out.

Man Seeks God: My Flirtations with the Divine

“Man Seeks God: My Flirtations with the Divine scans rituals so venerable they lack inventors, and doctrines so fresh he watches them evolve in real time.”

“Péter Nadás may infuriate readers accustomed to a Tolstoyan resolution of a series of interrelated stories and characters and times and settings.

“. . . for a glimpse into James Joyce’s shadowed soul and his demanding mind as well as his labyrinthine texts, Ms.

A Little Book of Love

“Combined with brief but practical exercises for meditation and actualization, Mr.

“This final episode in The Maeve Chronicles, for all its carefully recreated battle and bloodshed, lingers in the mind equally for its introspection and revelation.

“For readers captivated by a masturbatory rapture turned into a corporate model so successful that it becomes law, part of an “amendment relating to Vending Machines and Workplace Stress Re

Bringing Home the Dharma: Awakening Right Where You Are

“[Dr. Kornfield] addresses an audience impatient with platitudes, one that understands that the Buddhist path offers no shortcuts.

“On Canaan’s Side’s climactic pages glow with wonder and terror.”

I Killed Scheherazade: Confessions of an Angry Arab Woman

“An astute, vigorous, and candid participant-observer who seeks to radicalize the conditions by which Arab men and women can find satisfying, secular, and sensible lives together.”

The Grace of Everyday Saints: How a Band of Believers Lost Their Church and Found Their Faith

“While the results may play out less for the requisite happy ending than a fictional adaptation might concoct, the truth of this situation so cloaked in deceit it teaches a sobering lesson

Blood and Mistletoe: The History of the Druids in Britain

“Secrecy endures as the ultimate legacy of this mysterious movement, then as now.

“Friars’ Tales, intended for seminars on medieval religion and popular culture, may also benefit any reader eager to find out more about how men and women once may have conceived t

The University: An Illustrated History

Fernando Tejerina edits this first single-volume survey of the evolution and current state of institutions of higher learning.

The Heart of the Revolution: The Buddha's Radical Teachings on Forgiveness, Compassion, and Kindness

Returning to Budapest after three concentration camps, Imre Kertész wrote novels he knew would never be published under the Soviet regime.

Why Meditate: Working with Thoughts and Emotions

Fluently translated by Sherab Chödzin Kohn from the 2008 French original, this primer introduces meditation to the non-Buddhist.

The Fundamental Wisdom of the Middle Way: Nagarjuna's Mulamadhyamakakarika

This treatise condenses profound teachings about the “middle way,” between idealism and materialism, as the philosophical grounding for the Buddhist balance.

Paradise Lust: Searching for the Garden of Eden

Expelled from Eden, wanderlust may have been one curse for Adam and Eve. In this survey of modern exiles, their yearning to go back to the Garden afflicts them with the same intensity.

Unprotected Texts: The Bible's Surprising Contradictions About Sex and Desire

Jennifer Wright Knust, a professor of New Testament and early Christian studies at Boston University and an “American Baptist pastor,” recalls her own shaming as an adolescent for presumed sexual i

This first of four volumes explores the replacement of chronological historiography with a more fluid, less rigid approach that investigates what is remembered from the Irish past.

God's Entrepreneurs: How Irish Missionaries Tried to Change the World

A century of endeavor by Irish missionary priests, brothers, and sisters ebbs away.

The Selected Works of Samuel Beckett

This anthology compiles sayings of over two dozen lamas, past and present. Following the naturally emerging path into Buddhist practice, Reginald A.

The Buddha Speaks: A Book of Guidance from the Buddhist Scriptures

Many books endure by telling you about the Buddha, but this is one of the few telling you in his own words. Recorded by his followers, these discourses survived in the ancient Pali language.

Mixing Minds: The Power of Relationship in Psychoanalysis and Buddhism

As an analyst and analysand, who since her unconventional childhood has meditated and studied Buddhism, Pilar Jennings brings her professional expertise and personal experience into this rewarding,

The Heart of the Buddha: Entering the Tibetan Buddhist Path (Shambhala Classics)

These verses come from the earliest surviving Buddhist texts.

What Ever Happened to Modernism?

This eminent English critic confronts those who would discard the modernist novel, whose heyday seems to have been from 1850 to 1950.

Rebel Buddha: On the Road to Freedom

Can we strip a gilded statue or blow away incense?

If there may be no God that we can prove or deny, why be good?

Unlearning Meditation: What to Do When the Instructions Get In the Way

Jason Siff advises “what to do when the instructions get in the way.” That is, for both beginning and experienced meditation students, he encourages practitioners to relax.

Not long after the City of the Queen of the Angels was founded, its many newcomers and its few natives lamented its decline.

Occasions of Sin: Sex and Society in Modern Ireland

Can Irish sexuality free itself from the criminal evidence, the violent expression, the caricatured reaction?

This large format book is no coffee table artifact. A lively text by the Los Angeles Public Library’s map archivist, Glen Creason, along with an introduction by fellow native D. J.

Gothic Histories: The Taste for Terror, 1764 to the Present

Drawn to the hallucinatory, enchanted by the morbid, the gothic sensibility mixes incarceration with necromancy, technology with architecture, vampires with séances.