Raised from the Ground 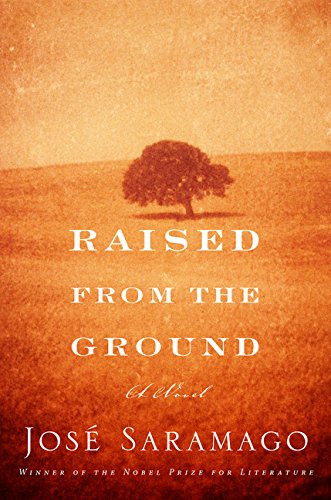 This chronicle of most of the last century opens long before, when the vast “inland sea” of southern Portugal with its “fish-sheep and predators” was first divided up.

Warlords divided the natural from the manmade as “the future shape of this present land was decided, and by very crooked means indeed, a shape carved out by those who owned the largest and sharpest knives and according to size of knife and quality of blade.”

The Great War begins beyond these borders of provincial Alentejo, early in the narrative. While it affects the fate of its weary peasants and resigned workers only indirectly, the power of its force, in José Saramago’s telling, reiterates his judgments, delivered implacably: “War ate a great deal and war grew fat and rich. War is a monster who empties men’s pockets, coin by coin, before devouring the men themselves, so that nothing is lost and all is changed, which is the primary law of nature, as one learns later on, and when war has eaten its fill, when it is sated to the point of vomiting, it continues its skillful pickpocketing, always taking from the same people, the same pockets. It’s a habit acquired in peacetime.”

Characters emerge among the Mau-Tempo (their surname denotes “bad-weather”) clan, wear themselves out, and die off after generating their hardy offspring.

Nature dominates, and manmade imposition of wages and laws and force contends against a perpetual order attuned to the seasons and the crops. To capture this rush of sensation, its lassitude and its propulsion, this author’s characteristic prose eschews capitalization and quotation marks and indentation. He inserts a capital letter whenever a new speaker comes in, but otherwise he prefers a headlong dash of words carrying along dense paragraphs.

For instance, workers who dare under the Salazar dictatorship to strike (even if they don’t know what that concept means, only that they weary of threshing and quit) find this implicit warning: “Mend your ways while there’s still time, and swear that you’ve taken twenty beatings, crucify yourself, hold out your arm to be bled, open your veins and say, This is my blood, drink it, this is my body, eat it, this is my life, take it, Along with the church’s blessing, the salute of the flag, the march past, the handing over of the credentials, the awarding of the university diploma, thy will be done as it is in heaven.”

As in his daring retellings The Gospel According to Jesus Christ and Cain, Raised from the Ground even by its own title evokes enduring myths.

The Three Wise Men make a cameo appearance at a baby’s birth, suitably adapted for Mr. Saramago’s anticlerical sympathies. Here the protagonists do not battle an angry and jealous God but their own predicament within the class system.

As a libertarian Communist, Mr. Saramago leaves the reader with no illusions as to his stolid humanism. While he nods to the duty of the policeman or priest, he cannot take their side when justice cries out and mercy goes unheard.

“Who gives the orders, who gives us life, well, that’s a good question, the boss gives the orders, and as for life, what’s that.” This counternarrative voice battles against the commands a peasant is given as he and his comrades are herded to an anti-communist, pro-Salazar rally. Throughout this febrile but readable novel, the Mau-Tempo family seeks to survive in the ancestral terrain of Mr. Saramago’s grandparents.

Here the feudal system continues amid cork trees and wheat fields, and the 20th century unfolds with barely a notice by those bound to the land and the nation taken over by the supposed republic under the Salazar regime. World War II comes and goes with barely an aside; isolation and ignorance attain the status of virtues by those ruling this far corner of Europe, next to another dictatorship over the rest of the Iberian peninsula.

When peasants and workers fight back by striking, by organizing, they are hunted down. From the perspective of an ant, we witness one man beaten to death in a bullring. “Even freedom is a slap in the face, a crust of bread thrown to the ground to see if we’ll pick it up.” Out of this relentless setting, the Mau-Tempos try to rise up.

The narrator usually speaks in the royal “we,” but sometimes leaps to first person singular for a moment before assuming the voice of omniscience, yet a puzzled one, bemused, angry, or resigned to the ages.

The teller of this family saga appears not to know all the answers, either. “Our problem is that we think only the big things are important, and so we talk about them, but when we want to know how things really were, who was there and what they said, we’re in trouble.”

Mr. Saramago seeks to give a voice back to those from whom his family came. But he searches within the uncertain vantage point of a narrator also stymied by how to give back to the illiterate and barely literate a fluent tone, a steady consciousness, worthy of them: “If only we could tie up all the loose ends, the world would be a stronger and better place.”

The bulk of the novel settles into resistance against the landowners, followed by repression. An eight-hour day and a minimum wage assume revolutionary potential, as such basic demands meet suppression by a determined oligarchy. Meanwhile, Portugal holds back the outside world, fearing liberalism, imposing censorship.

Margaret Jull Costa’s translation of this 1980 novel conveys the contexts of this era with helpful and necessary footnotes filling in what English speaking audiences will miss about veiled allusions to despots, rebels, puns, and poems from Portugal’s recent and distant past.

The pace slows, as endurance among the Mau-Tempos and their allies dwindles with old age, filtered through the central figures of João and his wife Gracinda in and past the middle of the 20th century.

This novel expects a patient reader willing to plunge into a detailed, nearly stream-of-consciousness approach played off of Mr. Saramago’s unpredictable third-person, yet intimate and offbeat voice filtered in and out of a variety of heroes and rogues.

They yearn for release: “Someone caught a glimpse of that much-vaunted freedom, but she is not one to be seen out walking the highways, she won’t sit on a stone and wait to be invited in to supper or to share a bed for the rest of our life.” Yet discontent grows, and rumors of revolt from far off come to hamlets without a radio or a newspaper with startling results.

Eventually, the “Carnation Revolution” of 1974 succeeds with barely any bloodshed. The military regime of Salazar and his cronies ends after more than forty years of control.

The novel concludes with a burst of energy: “One thousand living and one hundred thousand dead, or two million sighs rising up from the ground” combine “on this unique and new-risen day” as freedom appears to arrive for the Mau-Tempos and their neighbors—at last.