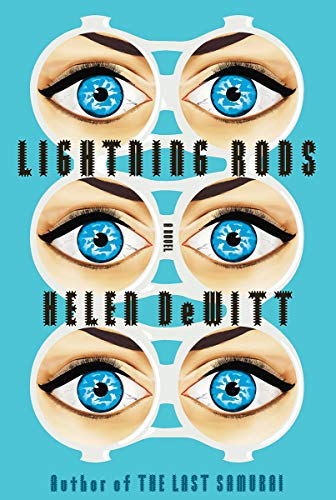 “For readers captivated by a masturbatory rapture turned into a corporate model so successful that it becomes law, part of an “amendment relating to Vending Machines and Workplace Stress Reduction” tacked on to School Milk dispensing and related good works for disaster relief in the timely wake of Hurricane Edna, Ms. DeWitt’s fanciful, yet usually very sober, tale may indeed entertain.”

The covert installation of a set-up in disabled stalls of the men’s room—by means of a “height-friendly cubicle”—reveals at designated times (set up by a computer network) the bottom unclad half of a woman from the corporate staff. She, encouraged by a considerable pay increase, chooses to show her anonymous backside to a male employee who, via notification on his office computer, liaisons in a predictable, if fixed and standardized manner, with the designated “lightning rod” female provider of such limited interpersonal interaction.

This innovation, to relieve male anxiety on the job and to enable females seeking remuneration that allows them a way to move up the company ladder (or to save up for, as two recruits will, Harvard Law School) proves a success for Joe.

But along the way, Joe meets the machinations of the FBI, the Equal Employment Opportunities Act, a blue peanut M&M-obsessed and obese human resources manager, a successful woman new-hire who will become a Supreme Court Justice sporting hundreds of subtly matching outfits, a future litigator who rationalizes her lightning rod function as about as arousing as inserting a tampon, and a dwarf who finds John Foster Dulles a fount of humor.

Be assured that Joe, through his creator, has thought through, by the end of this novel, every possible complication that ensues after he resolves to implement this situation to not only stop sexual harassment but to increase productivity and eliminate absenteeism among prized, if restless, male employees, and many of their quieter, if curious, female colleagues wishing to anonymously augment their paychecks. Helen DeWitt’s previous novel, The Last Samurai, roamed over diverse and erudite terrain, and while far shorter, Lightning Rods shares her odd notions of what intrigues us.

Ms. DeWitt tells this archly satirical tale full of “far-reaching psycho-sexual repercussions” steadily, if from a rather distant perspective. Joe and his colleagues possess quirks, but where similar send-ups of a near-future corporate and commodified American culture by George Saunders play better as short stories, at nearly 300 pages, stretches of Ms. DeWitt’s novel weaken as she appears not that interested in her characters as people rather than as types.

Ms. DeWitt shares a potentially fascinating reflection on how the ambitions of female executives and feminist professionals have undermined the quality of what used to be the secretarial pool; she offers equally provocative glimpses of how such an innovation as Joe markets might assist “time-sensitive” older women who have the body but not the face to continue in the escort trade. Ms. DeWitt’s best insights tend to hover around the inability of American law to anticipate the jerry-rigged, ramshackle modifications added over two centuries across 50 states. This subtext proves thoughtful, and she returns to it as the novel progresses, but the tale results in a stronger showing for its ideas rather than for the inherent depth of those men and women that she inserts to move her story forward.

While readable, the wry nature of the subject matter of Lightning Rods and the author’s primary focus on Joe—who, frankly, is not very interesting compared to his one great idea—gives this the nature of a fictional conceit which Ms. DeWitt sees to its finish as a dutiful exercise in speculation rather than a tale told for the sheer love of the telling.

More concentration on the formidable talent of his best recruits, Lucille and Renee, both future Harvard Law graduates, would have enriched the accessibility of this fictional conceit. The narrator tells us that Lucille will succeed in law and Renee on the Supreme Court, but these revelations lack much follow-through, and one is left to wonder how their competent service in Joe’s employment truly shifted them into the legal talents that they will display.

Joe allows himself (via the narrator) late in the novel a valuable lesson: Salespeople try to appeal to people’s better nature, but one cannot usually make a living off of one’s highest potential. “We live in the kind of world where people end up with their third or fourth or fifth choice because there just isn’t the money in their first choice.” If even a few people could live out their second choice, Joe muses, how might we better get by?

We do not learn much about Joe off the job as the novel progresses, and we see few men or women, after the initial invention’s impact, changed off the job by its inclusion. We hear of the nationwide sales as companies quietly adapt the concept, but we never witness how the product enters the popular culture—surreptitiously or in the media—beyond a few passing remarks. In an age so permeated by trends and networking, the force of such an invention to shift how people regard their jobs in offices surely would not remain subtle for long.

Late in the novel, a chapter about Joe’s attempt to sell the opposite stratagem to Christian supervisors—a workplace certainly guaranteed lightning-rod-free—sets up a promising subplot which fizzles; another with an after-work conversation between Joe and Lucille, who are never sure if they have “met” on the job in such a compromising position, shows hints of Ms. DeWitt’s ability to handle a potentially romantic theme, but again, this is not explored to its fullest.

Nonetheless, this supposition remains worth citing: “Joe was beginning to see that he now faced a social dilemma which had never been faced in the whole history of the human race. What do you say to someone if there is a one-in-five chance that you have had a close encounter of a ventro-dorsal nature through the wall of a disabled toilet?”

Ms. DeWitt, raised in America, studied in England and lives now in Berlin. Her novel, for a native American, betrays a few lapses in how Middle Americans talk, or at least how a narrator however omniscient might render their inner thoughts. “Canteen” instead of cafeteria, “aggro” for aggravation, and “talking clock” for alarm clock reveal that her time abroad has invaded her fictional space. Granted, these remain small blips on the big screen of how male drives compete with female craft, and both sides appear to get what they want out of this exchange—not of fluids but of energy, harnessed to increase male satisfaction and female compensation on the job.

For readers captivated by a masturbatory rapture turned into a corporate model so successful that it becomes law, part of an “amendment relating to Vending Machines and Workplace Stress Reduction” tacked on to School Milk dispensing and related good works for disaster relief in the timely wake of Hurricane Edna, Ms. DeWitt’s fanciful, yet usually very sober, tale may indeed entertain.

The lightning rods enable the triumph of a peculiar degree of separation. Sexual contact, intimate but prophylactically at a safe remove, turns into a “physical transaction” separate from “social interaction.” Here, intimacy is decoupled from intercourse. Sex gets marketed as a metaphor for how corporate life, dominated still by men but determined to accommodate women, wishes to pump the economy by stimulating, and then eliminating, the pressure one of our most basic human functions, achieved moreover by a convenient and discreet visit to a high tech, “height-friendly,” designated bathroom stall.