What Ever Happened to Modernism? 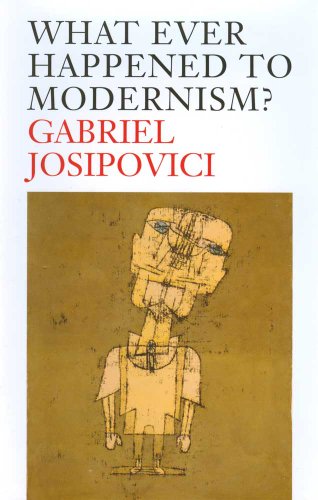 This eminent English critic confronts those who would discard the modernist novel, whose heyday seems to have been from 1850 to 1950. Gabriel Josipovici challenges the realistic, the fantastic, and the mundane fictions attributed to modernism in the academy and the marketplace.

He defends modernism as “coming into awareness by art of its precarious status and responsibilities, and therefore as something that will be, from now on, always be with us.” The cadence of his phrasing exhibits the characteristic style of this small, elegant volume.

Josipovici urges those who value literature over trends and theories to champion the cause of the lure of a fiction that addresses Max Weber’s “disenchantment of the world” as our predicament. Josipovici returns to Luther and Durer; they first articulated this discontented mindset. For the novel, one of its earliest examples, Don Quixote, pioneered this undermining of the reader’s expectations of solace within what lies between its satirical and picaresque pages. Cervantes imposes himself within the text “and turns it into something much stranger and more arresting, an exploration of the nature of novels and their ontological status.”

Instead of enchantment, modernism demands of its readers and viewers that they forget the artlessness or purported innocence of their stance. We must not halt before modernist creations expecting to see ourselves and our world reflected benignly or conventionally. We have to regard modernist works “as machines that secrete spurious meaning into the world and so muddy the waters of genuine understanding of the human condition.”

Entertainment becomes banal. The rarefied reader searches in modernism for meaning instead of escapism—even if the meaning escapes the diligent reader. Fictions are not reality, modernists caution their audience, and in this warning they seek to divert spectators away from the safety of an “inevitable production of plot and meaning” into a truer representation of our psyche and our perspective, one that cannot be altered after disenchantment unlike our mindset, which can.

What Ever Happened to Modernism? proves a demanding book. Josipovici expects the reader to have pondered the works and art he explicates. The pace hurries, all the way back to Euripides and Rabelais, then forward to Julian Barnes and Philip Pullman. While Professor Josipovici does not descend into literary jargon, to his credit, he does speak as if in a seminar. A liberal arts education appears to be the prerequisite for understanding what consists, in our less attentive age, of an erudite, traditional work of scholarship grounded more in a leisured humanism than an anxious skepticism.

This restlessness quickens as our times approach through the texts discussed. At the “heart of the modernist enterprise,” Josipovici discovers “that which will fit into no system, no story, that which resolutely refuses to be turned into art.” This vantage point may overwhelm the viewer.

Why this reaction should be preferred to academically promoted “literary fiction”—let alone bestsellers and mass-market fare—however, becomes an unspoken assumption. This professor apparently expects any reader of this book to already have renounced, by the very choice of this university press title, any ameliorative comfort from the aesthetic.

Modernism demands seriousness. Its dogged insistence on collapsing the fixed distance between language and story, reader and viewer, makes it as advanced as those dramas that dismantle the “fourth wall,” those films that refuse the happy ending, those books that refuse the neat conclusion. Such productions alert us to their exposed construction. They deny the possibility of another language-game or aesthetic veil that we can sweep over the work. Josipovici argues that contemporaries cannot retreat back to innocence after such linguistic and artistic strategies have exposed the artificiality of that which once fooled us.

His English colleagues come in for the most contempt in the liveliest portion of this study. Josipovici castigates those critics who fail to understand “that what is at issue is reality itself, what it is and how an art which of necessity renounces all claim to contact with the transcendent, can relate to it, and, if it cannot, what possible reason it can have for existing.”

Josipovici lists three reasons why English criticism may “fail better” (to borrow a usage from one of his influences, Samuel Beckett). Its “robust pragmatic tradition” has slid into a “philistine one,” as British power wanes and American cultural and political hegemony expands. Next, our times tend toward a suspicion of pretension and a deification of the “profound.” Third, trendy novels cash in on the latest atrocity and rush to peddle it as if sanctified, worthier of attention than a detective thriller or a fantasy paperback among those who tell us and sell us what to read next.

Finally, Josipovici rallies us to reread modernists. He directs us not only to Woolf but also to Wordsworth, who conjured up the powers of the Romantic Poet to energize his paradoxical calling “in an age when art itself is in question.” Two centuries later, Josipovici convinces his reader of James, Eliot, and other contenders against the complacent norm “to go back and try to understand what they were up to as writers, not dismiss them as reactionaries or misogynists, or adulate them as gay or feminist icons.” His call to take authors and artists by their word, as it were, resonates in an era too eager to shelve creative works by segregation.

His final sentence revives the restlessness that pulses beneath the professorial stance. He tells us that we are all rootless now. We can ignore this condition of the modernist sensibility as “something which blinkers us.” Or we can take advantage of its perspective to sharpen “our vision.” While this elevated position may expose Josipovici to attack from academia, he appears resigned to remain at his post, proud of the cause he asserts as the most honest one.

While this can be a formidable book in its rapid treatment of complex novels and combative art, it respects a steadily and stealthily evolving modernism as far back as the classics. This ambitious scope may convince the searching student and educated reader of the author’s plausibility in his approach to modernism. Josipovici may find fewer consumers and critics among a larger audience, but his reminder of what we have gained by the modernist assault on complacency may be welcomed.

In the end, Josipovici offers a refreshing retro-radicalism by rejecting the vetted reading list, the neat niches in the bookstore, the carefully contemplated multi-this and cosmopolitan-that curriculum.