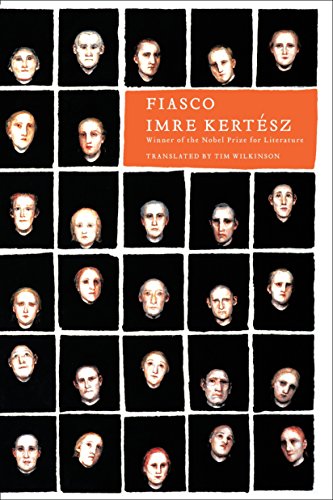 Returning to Budapest after three concentration camps, Imre Kertész wrote novels he knew would never be published under the Soviet regime. After he won the Nobel Prize in 2002, he mused how “I had the freedom to write as radically as I wanted, to go as deep inside as I wanted.” For, free of a market niche to fill in a democratic nation, he labored as a writer underground. The creation of Fiasco (also known as The Failure—the original title of ‘A kudarc’ in Magyar can mean also “the defeat, abortion, or throwback”—all five definitions fit) follows the two novels that earned him acclaim.

The first, Fatelessness (1975), deals with his time in the camps. Its title reveals the existential tone of his account, shorn of sentiment or humanist piety. Its teenaged protagonist watches brutality and rationality combine through German efficiency and mass cruelty. What I liked about this work was its refusal to become manipulative. Granted, Mr. Kertész refuses to pander to easy emotion here, and that may put off readers looking for a humanizing, life-affirming or message-laden story.

As with Kaddish for an Unborn Child (1990), the next work in what is now regarded as a trilogy, I doubt that much is fictionalized here; these novels remain too fragmented and disjointed to unfold as seamless works of art. Kaddish deals in a messy way with the narrator’s refusal to bring a child into this world.

What Fiasco adds to Mr. Kertész’ daunting reputation may surprise those expecting another Holocaust-related story. The title, as before, promises a serious theme, but deadpan Kafkaesque humor lurks, captured well in Tim Wilkinson’s British-inflected but comparatively fluid translation from the novel originally published in 1988. Wilkinson repeats the weighty sentence style and agglutinative word structures of Hungarian without making it too leaden; however, this remains as heavy a novel as his other two in this series, and offers no light read.

Based on his own life, Mr. Kertész begins by confronting his fate. His narrator has come back from the camps—the death factory witnessed as “a kind of student jape”—so he must write what he knows, about the subject nobody else wants to read. He sits next to a filing cabinet, typing in a dismal flat underneath the beast tenant he calls Oglütz, “the unsilent being” who stomps above him as “a female being who fed on noise.” The narrator, referred to only as “the old boy,” shoves earplugs in against her sonic assaults. He tries to write another novel that nobody will read, any more than they did his previous one about his experiences—honestly told, but the problem is that he cannot tell his readers, if any, or himself, of a false happiness.

“Auschwitz was present here, sitting inside me as an undigested dumpling, its spices belching up at the most unexpected moments.” This metaphor registers Mr. Kertész’ matter-of-fact tone. His protagonist “the old boy” struggles to escape its shadow: “In place of exemplary death, the facts can only serve up mountains of corpses.” From its impact, he tries to extricate himself from the wreckage, but art offers few consolations. “I was taken to Auschwitz not by the train in the novel but by a real one.” He has returned to a daytime existence after the war less immediately punitive, but just as soul-destroying.

He begins another novel, and its contents comprise two-thirds of Fiasco. György Köves finds himself in a land without a name, as featureless as any totalitarian city. Long sentences often delayed from ending by one parenthetical interruption after another mirror Köves’ anxiety.

His story follows his attempts after he returns home “from abroad” to navigate a Kafkaesque bureaucracy. He begins as a foreigner, as if waking after being haunted. Into a grim city of light, guided by a beam, he works as a journalist and then, after he is fired, as a machine-fitter unfit for such employment, before he or his alter ego has been conscripted into the military as a prison guard. Meanwhile, as fictional layers increase, Köves keeps writing his own fables, and he hears those of his colleagues who invent their own stories to share.

This saga takes up hundreds of pages. Often, little happens within the laconic expenditure of narrative energy in rendering such a series of unfortunate events. Moments more alive flit by, in a restaurant or the workplace, as Mr. Kertész indulges in quick character studies of Köves’ comrades or his lovers, but these caricatures, with passing glimpses of welcome satire, do not linger long.

Köves cannot control his destiny. The plot resembles “a recurrent nightmare” and only “by gambling away one’s hopes” does any practical aim for Köves appear to be fulfilled, however briefly. In a “restless, half-slumbering state,” he wanders in a system where each citizen must decide what to do. As a functionary explains: “Here they merely give you the opportunity, and then what they do in the room is take cognizance of your decision.”

His department head, during Köves’ lurch back into journalism (such sudden shifts prove common) tries to articulate the reason the system works as it does. All are servants of “a higher conceptualization,” moving toward an “unbroken perfectionism.” This consists of the system “trying ceaselessly to put people to the test.” In this “power game,” Köves surrenders. He loses track of who’s manipulating whom. He fails his lovers. His stints at the local watering hole, The South Seas, offer little escape from tedium.

“I can only write the novel that it is given me to write,” he tells his colleague after a sudden march under banners “WE WANT TO LIVE!” fills the streets for a moment. He must stay in this city even if as others go abroad to find what they cannot in their unnamed homeland. In the “Slough of Deceit,” both writers, the “old boy” and Köves, accept their fate, that of a writer of unhappy stories as their honest, only ones.

It’s difficult to read so much about such an enervating existence. Mr. Kertész in this allegorical-autobiographic tale far exceeds the incomplete fictions of Kafka. While Köves in his adventures tries to elude the “vague apparition which resembled the drowning man haunting his dreams,” by the end, after 360 pages of dense narration, the reader may understand why Köves and Mr. Kertész appear to merge.

The tale of a writer writing a novel about a writer writing a novel full of stories about shifting identities is a hallmark of postmodernism. Mr. Kertész produces a well-crafted work, but it does convey the bleakness of his nation and the era that produced him and his subject, exactly as he convinces himself what the outcome had to be. Whether Mr. Kertész captures better the feeling of being trapped by this regime, or his refusal to capitulate to its demands, remains typically ambiguous. As an existentialist writer determined to stare down his fate, he endures.

Fiasco concludes by slipping into the protagonist’s stoicism faced in the form of “the sweet memory of his fiasco.” For, after his novel has been accepted for publication, the writer takes in his pocket back to his flat a paperweight of grey stone. He places it atop a filing cabinet. Köves contemplates how the great boulder pushed by Sisyphus must eventually wear down, into such a rock that can be carried in a weary hand as one returns home, again to write what he must.