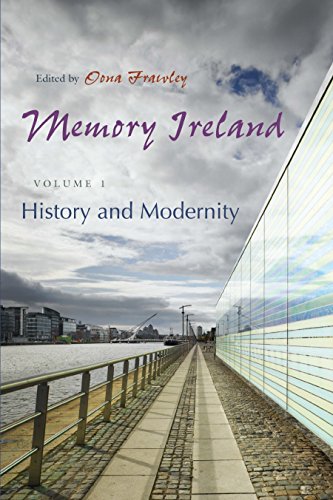 This first of four volumes explores the replacement of chronological historiography with a more fluid, less rigid approach that investigates what is remembered from the Irish past. Oona Frawley edits a wide-ranging and deliberately open-ended collection of scholarly essays. Contributors share no single approach, so the results may therefore appeal more to researchers seeking articles on their own particular interests in this anthology.

“Memory and History” by Barbara A. Misztal introduces theory, but she does not explore the Irish academic shift as recently “enhanced by the cultural turn in history” in any detail. Next, Frawley’s essay applies cultural memory to an Irish postcolonial context. She defines this type of memory as “remembrance among social groups that manifests itself in multiple forms and relies upon acts of narration.” She incorporates a “narrative imperative” that traces how scripts and schemas develop, but again the specific examples from Irish fiction are scarcer than one might expect. These are generally mentioned in one paragraph, with no details, compared to the theoretical discussion, which takes up nearly all of her entry.

A section on “Remembrance and Forgetting in Early and Premodern Irish Culture” opens with Christopher Ivic’s study of early modern Irish “collective memory,” and here the chronicler Edmund Campion gains extended attention, for his audience and his aim: to undermine the “Old English,” that is, the Catholic settlers in Ireland who had been hibernized and therefore degraded, as opposed to the reforming English in the wake of the Reformation. Ivic concludes with a look at Geoffrey Keating’s Foras feasa ar Éirinn, a rebuttal to both the older and newer English historians and polemicists.

Mary Helen Thuente ponders the harp “as a palimpsest of cultural memory,” and illustrations would have complimented her informative survey well; this volume (in galley as reviewed) lacks all but one instance of a visual compliment. Guy Beiner documents clearly the revivals and revocations (as “social amnesia”) around the failed Irish rebellion of 1798, the “Year of the French,” which sparked the two-century campaign for republicanism. He contrasts the centenary’s commemorations with those of folk memory, and how the evangelical and pro-British Ulster population often resisted, contested, or erased traces of their role in the nationwide uprising a century before.

Máirín Ní Cheallaigh examines another struggle. How did women help to preserve a much more attenuated memory, that of preserving archeological monuments in the 19th century? Antiquarians tended to be male, so female participation in this conservation and restoration project has been ignored.

Modernity enters with Malcolm Sen’s situating memory studies into Ireland’s “fractured, semicolonial” entrance into late 19th and earlier 20th century orientalist, spiritualist, and antiquarian debates. The Celtic Revival bloomed, and with it, political as well as cultural ideologies that sought change, as they “sacralized” the project of nation building. The playwright John Millington Synge and the politician Charles Stewart Parnell enter P. J. Mathews’ chapter, two “unconventional Anglo-Irish gentleman” who shared a County Wicklow origin, who sparked controversy over sexual morality, and who left an Ireland divided by the people’s response to their impact.

Anne Dolan raises the vexed questions around what is remembered about the wars for Irish independence. One preceded and one followed; the victory by the rebels had left the island partitioned and the new republic bitterly divided between republicans who fought against those who accepted a partially free Irish state. Dolan digs into the National Archive accounts to unravel in one famous case who was an informant, who angered the I.R.A., and what happened to policemen murdered as a result. She compares the memorialization of the dead of the first war, 1919–21, with those killed in the civil war of 1922–23.

One revolutionary who survived, the one who led the resistance, Éamon de Valera, himself left a vexing legacy in Irish memory. His longevity and cunning allowed him to blur what was remembered with what was current. Mary E. Daly neatly compiles the way de Valera was both “practitioner and interpreter, guardian of the living record” as living history himself, eventual leader of the Irish nation he fought for, against, and then presided over for decades.

In an Ireland proclaiming freedom but still repressed, Emilie Pine uncovers another long-lived institution, the Magdalen Laundries. These religiously-run workhouses kept “fallen women”—a term loose enough to include those mothers pregnant out of wedlock—and were part of the network of orphanages and industrial schools were such children might be confined. Women as “penitents” were signed away to the laundries by “a family member and a parish priest.” Some stayed there the rest of their lives. Pine studies three fictional representations in film and print alongside other depictions of this Irish subculture, and she fairly notes their exaggerations as well as truths.

The Abbey Theatre stands for an Ireland that the outside world felt better about celebrating as “typical” of its culture. Holly Maples in a solid essay shows how the financial crisis of that theatre, around the time of its centenary, added to its woes, for it had long been—at least in Ireland itself—criticized as being in decline. As opposed to decline, David Cregan finds “Pink Power” among recent movements for equality seeking to reclaim homosexual pride in a country too long determined to suppress its manifestations.

In an inventive essay, Irish-language scholar Brian Ó Conchubhair pairs the post-9/11 war on terror with the paranoia that sparked F.B.I. fears. A couple conversing in Gaelic in Chicago, Fourth of July 2002, were taken in by the Feds as Arabic speakers. So the story went, spreading in the press and on the Net. But it was a hoax. Ó Conchubhair places this anecdote within an examination of how Irish nationalists using the other native (or learned, sometimes in prison) language have been suspected by the British authorities.

Multiculturalization, a feature of recent Irish life, complicates narratives of a cohesive, nationalist origin for the Irish today. Lorraine Ryan takes on how immigrants into, as opposed as out of, Ireland challenge the norms. She critiques the Celtic Tiger rhetoric as itself biased in how it reduces and suppresses an Irish past with racism and injustice. She favors an Ireland ready to incorporate the rest of the world into how it remembers its past and builds up its future.

Finally, the afterword by Irish-language critic Alan Titley turns back to “The Great Forgetting,” when the destruction of the traditional culture accompanied the rapid erosion of its original language. After the famine, retrieving what Gaelic locked in itself became difficult for generations raised with English. The language shift wiped out folk memory for many families. Silence became preferable to speaking in Irish, which was punished in British-run schools, seen as backward, a sign of poverty in a nation resigned to immigration to survive. Instead of bilingualism, as in many European or colonial counterparts, the Irish speakers “atrophied and localized,” until they could no longer easily understand each other, cut off by regions into dialects. Even today, as Titley might agree with Ó Conchubhair, the relegation of Irish speakers if not as subversives than as marginalized continues, in an Ireland that so many other contributors examine as European, globalizing, and diverse.