The Wake: A Novel 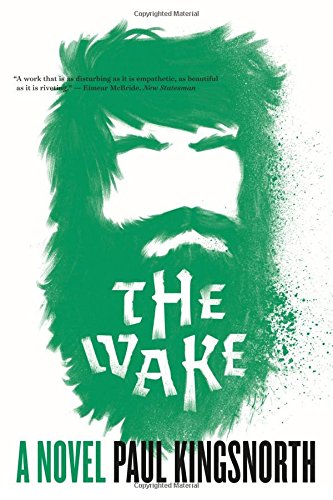 “If you enter a few chapters deep into this novel, you hear and think and feel akin to the farmers and churls who found their language, their loyalty, and their land wrenched away.”

Schoolchildren, in a more Anglocentric era, used to know "1066 and all that." While fewer today may remember that year and the momentous Norman Conquest, Paul Kingsnorth retells once-familiar tales of that invasion and two years of its devastating aftermath, through the speech of Buccmaster.

In a postscript, the author explains why he chose a "shadow tongue." Kingsnorth defines his invention of an Old English counterpart that he employs, without capitalization and with a modified orthography faithful to etymology, as "a pseudo-language intended to convey the feeling of the old language by combining some of its vocabulary and syntax with the English we speak today."

The results slow any reader down. Even with a knowledge of Anglo-Saxon, this prose forces one to halt one’s pace. One cannot skim this. Therefore, the writer's bold decision to force us into an alien mindset succeeds. If you enter a few chapters deep into this novel, you hear and think and feel akin to the farmers and churls who found their language, their loyalty, and their land wrenched away.

This disorientation features cleverly, through a theme pushed aside from chronicles or textbooks. Buccmaster follows the ways of the old gods, before Christ. As a comet flies overhead in 1066, a harbinger of doom for King Harold and the Saxons, Buccmaster rejects what "is a raedel for dumb folc" for "the bocs and the preosts the bells the laws of the crist it is not lic they sae." He believes, but in the denigrated Wayland the Smith, the World-Tree of Norse lore, and the "eald" forces of nature.

He rejects "this god from a land of dust where there is no night" as a foreign import, imposed by Rome and then by the forces who bless the "bastard" William of Normandy in his assault upon England. Buccmaster, a proud landowner, as he reminds us and his listeners constantly, of but "three oxgangs," holds in contempt those who oppose his defiance of the Church and of the new Crown. We hear events as he and his villagers do, first as rumors from afar. He knows his fate will be subsumed to that of his fellow English, but he fears weakness. For 1066 is a "year will be lic no other in the lifs of all men in this land." For Buccmaster of Holland, in Lincolnshire's fens, senses doom.

With the imposition of Norman rule grim tidings dominate. Buccmaster and a few followers flee to the woods for safety. They long to "becum grene lic the leafs and the grass who lifs lic the fox and the wolf who is wilde lic the hafoc and the crow with teeth what tears from the enemi small bite and small bite until all the meat is gan." (There is a glossary for some of the more elusive terms appended.) This passage shows Kingsnorth's skill at transcribing speech and thought in an innovative manner. Reading this version of English, its roots emerge and remain vivid throughout The Wake.

Being a founder of the ecological Dark Mountain Project, Paul Kingsnorth displays keen sensitivity to the natural realm that the "grene men" seek to inhabit. Norman plunder, rape, murder, and the brutality that any war incites, by cavalry or by guerrillas, make this a sobering account of resistance to colonial and papal power. Contemporary resonance to this campaign resonates, even as the author wisely keeps this within the disconcertingly pastoral settings of Lincoln and the forests around fens.

Their furtive actions will stretch on too long, as the two years of Buccmaster's maneuvers and stops wear down his small band and the reader. But this is the cost of verisimilitude, for any campaign is given over to languor, doubt, and boredom rather than rousing derring-do.

As Norman fortresses rise over the garrisoned towns, "thralls mac the castel to mac them selves thralls." Kingsnorth reminds us in his afterword how 70% of Britain today remains in the hands of 1%, and he wonders how this unequal distribution of land and wealth has compromised the fortunes of his homeland ever since.

Two real-life episodes, of the rebel Hereward the Wake and the kidnapped Bishop Turold, frame this novel. But the emphasis rests with the defiant men and bloodied women in the margins. Those who watched these events linger, still anonymous after a millennium. Their tongue was torn out and grafted to French manners, their Saxon gods capitulated. But in The Wake their words fought on.