Land of Love and Ruins 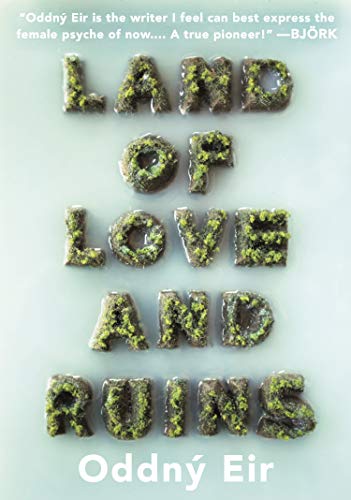 Combining an Icelandic sensibility enriched by nature with a cosmopolitan immersion into complexity, this narrative blends a journal with semi-(at least) autobiographical reflections. Oddný Eir Ævarsdóttir, in veteran translator Philip Roughton's straightforward English version of her 2011 entry in a series of to date five publications pursuing this mixture of fiction with fact, reflects on the threatened ecology and cultural heritage of her homeland.

Land of Love and Ruins situates Oddný (first names are used according to Icelandic style) within a nation too eager to sell its resources to weather the recent recession. Her work on the Biophilia Project with the singer Björk enters this text, a method by which Oddný tries to summon up resistance to capitalism and sustainability of tradition.

The original title of this book, Jarðnæði, as Oddný defines it, mingles "næði (peace, quiet, privacy, leisure)" with "nað (rest, quiet, grace)," with the compound word, meaning "piece of land" or a "farm tenancy." She seeks in these pages that refuge or tie to her ancestral realm. Returning there, she sniffs: "It certainly is nice that there are still sheep grazing and farmers sleeping soundly in their farmhouses amidst all the summer cottages." However, how intimately she can revive her own attenuated connections to the terrain remains an open question, in the snide tone of this passage.

Entering her forties, she contemplates motherhood and attachment (her male companions herein earn names of different birds). The animal state attracts her. She regards herself akin to an "old fox roving through the lava, russet and independent." The overlap of barrenness and freedom suggests her fate.

Encountering the predicament of her neighbors, she adapts a medieval register as Iceland appears not to learn from its banking folly. "Clear is the Icelandic owl-eye in the gloom of the economic collapse; glistening is the eye of the guest. Can you counter high-treason, owl?" Around the natives, foreign capital and rapacious investors scan the territory, bent on extracting its heat and minerals as they have its citizens' coffers.

Oddný yearns for housing with a "little healing nook" as solace, where the grass can be felt and the earth can restore energy to a depleted body. As in her homeland, so in the body personal made weary by the body politic. This storyline charts a search for retreat and recovery.

For, "when you drive around" the Icelandic landscape "in a jacked-up SUV," one is cut off from life. Oddný mourns how visitors to the summer cottages view their land beneath "as plots, not the earth." Having lost a "unified vision" of how humans survive within the ecosystem, Oddný warns about us losing any sense of a future with hope. Within herself, within Iceland, she diagnoses this malaise.

She cites Hannah Arendt on the totalitarian intrusion of a public realm into an all-expanding private one, where people are left bereft of quiet within themselves or "free, unrestrained deliberation in a public forum." Although unacknowledged, echoes of the Situationist critique of the "society of the spectacle" resonate in Oddný's work, as well as the critique of financial collusion and domination by the superpower(s) in the 1948 Cold War satire of her predecessor Halldór Laxness, The Atom Station.

Like Halldór, Oddný seeks in her maturity a retreat from the urban assault, even as she, too, has long chosen to live for career reasons in the capital rather than on a croft. "It's possible to work on something besides an excavator." In a country far more wealthy than in Halldór 's formative years, the grants provided for the creative talents in a bookish and experimental scene in the nation today certainly ease her living.

Nevertheless, as in Oddný’s itinerary taking her to the Continent, her affinity with international contacts contrasts with her decision to sketch out another lifestyle, away from jets and conferences. She concludes her ruminations: "Our extended family might have to live in the wilderness sometimes, sometimes in a cave or up a tree, out on an island or down at the coast, all depending on how our natural cycles connect to the sea and the land, heaven and hell, I said." She pauses, and her interlocutors respond: "Yes, of course, certainly it will be possible to move from place to place, change things up, they said." Yet in Roughton's rendering, there persists a hint of doubt about utopia.