Man Seeks God: My Flirtations with the Divine 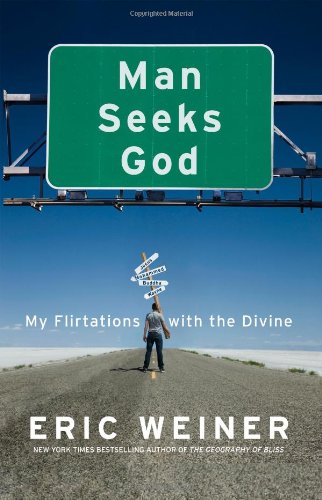 “Man Seeks God: My Flirtations with the Divine scans rituals so venerable they lack inventors, and doctrines so fresh he watches them evolve in real time.”

As a “gastronomical Jew” but not raised with any belief, this skeptical, neurotic journalist begins his global exploration by recounting a nurse’s whisper to him as he lay on an operating table: “Have you found your God yet?” This inspires his lively search among eight “varieties of religious experience,” as he credits William James’s pioneering study. He starts, as do many seekers, by going to California.

But Mr. Weiner does not last long on the Mendocino coast at a Sufi camp. Falling down a “New Age rabbit hole,” he laments that the establishment’s more “camp than Sufi.”

He departs for Istanbul, visits sites connected with the medieval visionary poet Rumi, and finds that surrender to Sufi’s spell, as shown in the famous whirling dervishes, comes closer to the love than of Islamic “submission” to a cold creed.

His trek into Buddhist wisdom leads along a well-worn path to Kathmandu. Learning meditation from “Wayne from Staten Island,” the process of self-examination as the way to liberation feels endlessly self-referential to him, as if he is biting his own teeth, but he perseveres.

With the gray-clad Franciscan Friars of the Renewal in the South Bronx, Mr. Weiner learns of their “radical dependency” on a life committed to poverty. Mr. Weiner witnesses their tedious tasks to serve the poor.

One friar confides: “You find yourself trying to love somebody who doesn’t want to be loved.” Mr. Weiner receives advice for his own skittish need to underline books, to analyze what he finds: “When in doubt, give thanks.” Rarely thanked, these diligent if weary friars persevere.

Indulgence is discouraged for Franciscans, but encouraged by Raëlians. This, “the largest UFO-based” religion, glories in bonding, even handing out condoms. Founded by “a second-rate French journalist” who, for Mr. Weiner, espouses motivational-seminar-speak like “Tony Robbins in a space suit,” Raëlism invites or expects less respect than the previous religions. One chant surrounds him at an enthusiastic meeting: “Free your breasts, free your mind.”

His search continues into not a modern but ancient message, in a 5,000-word “short ode to conciseness,” the Tao Te Ching. Traveling to China’s Wudang Mountain, Mr. Wiener learns from a fellow American, Sandie, how Taoism looks to this world and this body as the gateway to truth. Sandie goes with the flow existing literally at the heart of the Tao. Whereas Mr. Weiner has assumed that religious folks care more, Sandie tells him she grows to care less.

Mr. Weiner imagines that the passion and intensity of his encounters with Wiccan ritual echoes that of the now-faded ceremonies at the start of Islam, Judaism, and Christianity. Freed of sin, compelling its makers to use its forces for goodness and not harm, Wicca’s ethical component resonates with Mr. Weiner.

Yet, as with other religions he has encountered, it fails to ease his melancholy. Figuring that paganism’s “lowercase gods” would have little time for him, Mr. Weiner turns toward the ancient ancestor of witchcraft: shamanism.

Shamans, after all, were primitive psychiatrists. Today, Dana, a former executive in Beltsville, Maryland, hosts a drum-led circle: “Now materialize your power animal.” Participants fantasize and let go of their worries as they are guided into realms of the spirits.

While all this pleases the “smart-ass” Mr. Weiner more than he may have expected, he cannot shake the mental image of one dream-weaver’s companion, Sasha the Poodle, whose eyes lock into his as they both wonder what the $#%^ those humans are up to.

Finally, Mr. Weiner reluctantly faces his ancestral Judaism in Tzfat (Safed) on the Sea of Galilee, settled by Kabbalists expelled by the Spanish Inquisition. His psychological unease grows.

A wise supporter of religious harmony in Israel, writer Yossi Klein Halevi tells Mr. Weiner that the Jews need him. Those who turn him off—by rules and rituals—will choke the life out of Judaism unless he brings what he has learned from Kabbalah: that such teachings open up life by its eternal forces.

Mr. Weiner cannot agree with Yossi; he insists that he remains temperamentally a seeker who must wander. He convinces himself as he leaves Israel that he is not a dilettante, but a universalist. He argues with himself and others about how his wry orientation transcends any denomination or affiliation.

Man Seeks God: My Flirtations with the Divine scans rituals so venerable they lack inventors, and doctrines so fresh he watches them evolve in real time. True to Mr. Weiner’s nature, he concludes by constructing a composite God assembled from all the faiths he’s studied but with an identifiably Jewish angle that he finds he can admire.

Mr. Weiner finally confesses that out of small steps, progress toward understanding emerges. He also no longer flinches while observing the Jewish holidays with his little girl.