True Stories: And Other Essays 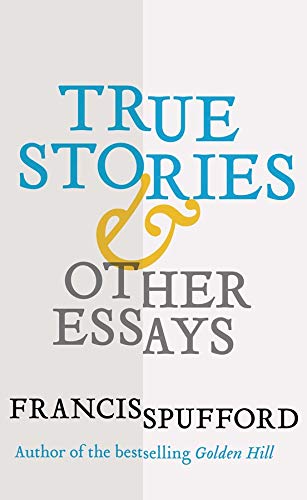 “In an age of dwindling attention spans for serious reflection and stimulating journalism, True Stories & Other Essays provides intelligence and verve.”

Where fact and fiction blur draws this English chronicler through the Cold, Red, Sacred, Technical, and Printed. These sections sort out Francis Spufford's articles, prefaces, talks, and reviews. True Stories: And Other Essays selects 40 previously published pieces. By avocation, Spufford roams the permeable realm where the verifiable and the imagined meet. As to truth, he refuses to take sides.

That is, he examines "the blatant nipping and tucking that folds the invented world together along lines the real thing never bends at." He arranges material so that "truths of observation" connect with those of invention.

He begins at the planet's poles. There what the last century celebrated as another "heroic age" of exploration created a terrain where what was conjured up competed with what was calculated. Concluding his introduction to the reprint of Apsley Cherry-Gerard's The Worst Journey of the World. Spufford shepherds us into the setting of Scott's doomed 1910–1913 Antarctic expedition.

Through the mediator, we watch as if the author returns to the events that he and his fellow adventurers witnessed. "In the frighteningly powerful magic lantern of memory, he sees the black specks of humans on the white snow. As he writes, they begin to move, and become his friends, sledging towards him. There they are. The dream, or the haunting, enfolds him. He sees them. He hears them. And as we read, so do we." This exemplifies the skill with which Spufford mingles the element of the suggested with the product of the empirical. Ice and cold lead him into "whiteness."

Yet he carefully sidesteps falling into poesy. He limns the "unconscious irony" with which a contemporary black scholar resurrects his own subject, Peary's North Pole companion Matthew Henson. Spufford likewise extracts the "habit of dislike" within another biographer's work on Nansen. He admits how the Antarctic deserves to exist for itself, according to environmental philosophy. This does not entirely cancel out the appeal that expanse encourages within the collective unconscious. Spufford, who has scoured the lands of ice and cold at length, acknowledges its grip.

Another vista where the speculative and the tangible blur took Spufford from a first look around 1990s Silicon Valley to a now nearly forgotten emanation of the same "mythology of abundance." For a half-decade post-Sputnik, the U.S.S.R. also predicted the arrival of a "confident technocracy with a chance at achieving its authoritarian utopia." Spufford plays no stooge. "I wanted it to be possible to read Soviet life as a kind of Dilbert cartoon printed all the way to the margins, a saga of corporate idiocy from which the citizens of the USSR never got to go home, because, with the firm and the country being coterminous, the management could pursue them twenty-four hours a day with bullshit about productivity and lean inventory management." Notwithstanding, he wants to understand hope.

Cautiously, he enters the mindset of a brief span when progress was pitched as within the reach of the proletariat. "Yes, for much of the eighty years during which the USSR was the planet's unique experiment in running a non-market economy, the experiment was a stupid experiment. But during the Soviet moment there was a serious attempt to apply the resources of the educated country the Bolsheviks had kicked and bludgeoned into being." This phrasing conveys the balance Spufford seeks between polarized perceptions. He admits his reliance on secondary sources, but he defends his approach of mingling the documented with the suggested to enliven this period, fifty years afterward.

Perhaps inevitable when reporting on Soviet plans, Spufford shares in his scrutiny a scrupulousness that may cause the gaze of less rapt readers to falter. His aim to compile all his short-form material results in 30 pages that move efficiently, before another 40 wear out the conveyor belt of facts, fiction, rationales, and explanations after the facts set down in his fact-meets-fiction Red Plenty.

Unsurprisingly, the next section on Christian apologetics sets out the same strategies of offense and defense against critics. Spufford proclaims a "defence of imagination" as he expounds on religion as primarily "a structure of feeling" and "a house of emotions."

The ideas supporting this framework, he avers, only follow to confirm one's initial beliefs. Or at least to entertain them. He sides with many who pass in and out between faith and doubt. As the talk delivered in front of his adversary in debate, "Contra Dawkins" promotes the primacy of experience before any intellectual support boosts belief.

Many entries halfway into True Stories sharpen; in “Sacred as in Red,” Spufford quickens his wit when he faces his foes. Recounting C. S. Lewis' attempts to sway his audience toward Christ, Spufford confesses that theodicy, the "problem of pain" and evil in a God-created world, does not diminish. He dismisses hell as a "human construct." He avers that the New Atheists thundering against Christianity fall into the Puritan trap of denouncing not only their proper target of Catholicism, but all that for him has conveyed a truer form of doctrine and practice within the post-Reformation. In passing he begins an essay about the British unease with its religious heritage as "bonds of sympathy are severed" by noting his wife is "a parish priest in Cambridgeshire." But that is all we learn, for better or not, here.

For Spufford keeps his personal life out of these pages. He moves us on through the Technical and finally the Printed. The steampunk icon of the Difference Engine, real and imagined; British boffins tinkering with rockets in a rapidly deindustrialized England; Kipling's Jungle Books; Kim Stanley Robinson's Mars trilogy; Terry Pratchett and Robert Irwin; Iain M. Banks and Elif Batuman: tributes and reviews of fellow inventors in word and deed conclude the compilation. Readers should peruse the acknowledgments, where Spufford specifies that are radio broadcasts, lectures, or written work.

These distinctions matter, for the variety of media within which these inclusions were prepared attests to the range of interests (and at times the determination not to let any detail go unmentioned), characteristic of Spufford's critiques and reflections. He continues the British tradition of explaining the obscure or arcane in bolder, blunter terms. In an age of dwindling attention spans for serious reflection and stimulating journalism, True Stories: And Other Essays provides intelligence and verve.