The Buddha Speaks: A Book of Guidance from the Buddhist Scriptures 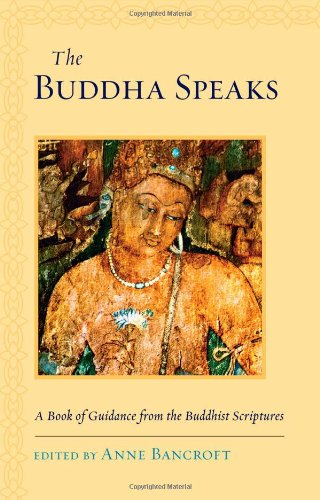 Many books endure by telling you about the Buddha, but this is one of the few telling you in his own words. Recorded by his followers, these discourses survived in the ancient Pali language. As the Sanskrit versions later were destroyed by invaders, these Pali texts taken down from Indian oral tradition remain the earliest renditions of his dharma-teaching recited three centuries earlier. Anne Bancroft compiles them into an accessible vernacular which improves upon the Victorian-era rhetoric from those who gathered them for the first Western audiences.

Ten sections guide the reader toward enlightenment. They begin with the Buddha’s own account of his realization of suffering as the inescapable root of earthly existence, and the way out of its habitual grip by the discipline of meditation and the exercise of compassion that leads to one’s enlightenment. “Awakening” phrases this clearly: “Since all the world is so attached to material things, it’s very difficult for people to grasp how everything originates in conditions and causes. It’s a hard job for them to see the meaning of the fact that everything, including ourselves, depends on everything else and has no permanent self-existence.”

Such a style speaks well for the Buddha’s own speech. It revives the rhythms we hear. What became defined as “dependent origination” by Buddhists in the above excerpt comes across clearly. It remains profoundly subtle, as the Buddha acknowledged. But this changeless insight leads to freedom from attachment, he discovered within, for those who put this into practice.

As the Dhammapada sums up: “You should do the work yourself, for buddhas only teach the way.” Buddhism demands application, not theory, and action, not merely contemplation or study. “Love,” the topic of the second chapter, urges the follower what the Buddha urged for his own son: to bring loving-kindness into the world out of one’s awakened self. Ill-will and harm and cruelty, by this cultivation, fade away. “By liberation of the self through love,” its practice inspires Buddhists to free themselves and others from pervasive suffering.

“Clarity” brings one closer to “uncreated and unconditioned reality,” that is, a detachment from attachment to body or wealth, life or concepts. “When you are no longer dependent on name or form, you will indeed become a seeker.” This non-duality, this refusal to limit perception to a mind-body or spirit-matter dichotomy, breaks down the habitual mentality that obscures insight.

“Body and Mind” reminds the reader that the Buddha taught that the world’s length and breadth and origin and termination all lay within “this very body, six feet in length, with all of its sense impressions and its thoughts and ideas.” Forms arise, and forms cease: this “embodied world” must be “penetrated and realized,” so as to be understood. A middle path avoiding ascetic excess or abundant indulgence allows seekers to care for body and mind sensibly. It also invites them to detach themselves from sensual attachment so as to prefer subtler delights.

“Contemplation” brings the Buddhist into reflection upon such possibilities. Steadiness by controlled posture and regulated breathing centers the practitioner. Water frequently occurs in dharma teaching as a metaphor, where the ripples do not disturb the depths. In these earlier texts, it occurs as a rejoinder to the Brahmin rituals: unclean secretions wash away, but the water stays untroubled and not disgusted, as all impurities flow away under its power.

“Sorrow” cannot be blamed all on one’s self or others; the Buddha explains how everyone’s deeds “are conditioned by ignorance” as the origin of suffering. If ignorance ends, wisdom may begin. “There is no separate self to suffer,” and this understanding, The Dhammapada tells, leads to clarity. In an all-changing array of arising and passing away, nothing remains for long. “If you want to get rid of your enemy, the true way is to realize that your enemy is delusion.”

Grasping to any fixed being, any concept, any item, itself will lead to folly. Happiness emerges if the insubstantiality of the delights and terrors of this world equally appear as beginning and ending. “The hunger of craving pollutes the world, and the pain of suffering causes the greatest fear.” Mindfulness, a conscious commitment to freeing the self from impulsive habits, beckons.

“Truth” saves, lives in many places, and endures eternally. Like a lamp in the dark, so it should be held by seekers, the Buddha said as he was dying. A chariot, in his famous parable, cannot stand on its own as an absolute. It consists of its parts, but not in any entity that exists outside of its components. Similarly, there can be no “I” or “I am” that is absolute; no “body” endures always. Neither does truth exist in terms of a right-wrong reasoning that outlives its own transience. One may notice how the Majihima Nikaya has been referenced twice in this paragraph, as two versions of eternal truth have been paraphrased. This, too, may reveal the challenges within.

“Life and Death,” speaking of binary components, represent another tension. The Buddha skillfully sidestepped those who sought to pin him down about the post-mortem survival of a body, the origin or fate of the universe, the beginning or end of the soul, or even the conditions of birth and rebirth for an awakened one. He regarded such speculation as irrelevant. His concern remained with “the end of suffering and the finding of happiness.” With one’s own freedom inherent, as all can seek enlightenment, disentangling the self awaits a pure seeker.

“Time and Infinity” illustrates how an “unborn, uncreated, unformed, and unconditioned” condition permeates for those who leave behind the realm of time and creation, life and death. Awareness of this draws the seeker towards liberation from a deeper nature than that conditioned by flesh, gold, beauty, fear, desire, or delusion. Friendliness and compassion bring out the best in the one seeking perfection; letting go of one as apart from the world enables one to become more comfortable within the world, which is recognized as fleeting and rootless.

“Wisdom” tells how thoughts themselves make the world; that is, harmful thoughts lead to trouble “as the wheel follows the ox that draws the cart.” Ignorance can be overcome by insight. Even stupidity, according to the Visuddhi Magga, eventually becomes indistinguishable from wisdom. That is, all blends together “in the great ocean” of wisdom in the awakened mind. Reality in its ultimate nature undercuts all definitions, all distinctions, all definitions.

“Self and Society” reminds the practitioner not to stop with one’s own self when it comes to the path to enlightenment, for the path cannot be followed when it stops with one’s self. The Digha Nikaya advises one to become “an island and a refuge to yourself,” by overcoming one’s dependence on the body and on feelings. Greed and desire enslave the weak. But the weak also need assistance. Buddhist enjoins compassion and fairness: a proper wage, a basic level of sustenance for farmers, a secure income to alleviate poverty, and capital for traders.

Wealth is in itself a neutral force. It’s lawful, but its means of gain must also be lawful. Harming others cannot justify its accrual. Attachment to riches will not bring lasting happiness. It must be held on common on behalf of all beings, not to ensnare one within the lures of materialism.

Similarly, wrongdoing can be avoided. Hatred can be replaced by a refusal to retaliate in ill-will. A Brahman asks why all of the Buddha’s followers do not reach Nirvana. Rather than parry him by a clever retort, he explains how directions to a place may be given, but the inquirer on the road may or may not use them to travel correctly. “All I can be is a shower of the way.”

Many of these sayings draw from The Dhammapada (reviewed in New York Journal of Books) compilation of versified sayings, as well as sutras including the Nikaya collections. These became linked with Theravada, Southeast Asian schools of Buddhism, and the monastic interpreters of these dharma-teachings. They were classified by length, theme, or content, but Bancroft does not explain their provenance in her brief introduction. She focuses on the message rather than the medium.

Although this anthology neatly presents the pith of the dharma, free of footnotes or clutter, too minimal a presentation does provide one letdown. Bancroft is not credited as a translator but as a compiler and editor. Still, she does not credit her source texts beyond a credit such as “Samyuta Nikaya” or “Dhammapada.” Nor does she offer any documentation.

This underwhelming editorial support, given this book’s publication by a leading Western Buddhist press, appears to shortchange the pioneering translators and diligent editors, past or present, who enabled her own fluent popularization. Fuller documentation for these elegant modernizations might have guided the reader back to monastic commentaries and a deeper appreciation, at least for these few inquirers, of their textual and contextual Buddhist roots.

For many, all the same, Bancroft’s inviting compilation will goad the seeker toward a path to enlightenment, as if revived in the everyday words attributed to the Buddha.