Why Priests? The Real Meaning of the Eucharist 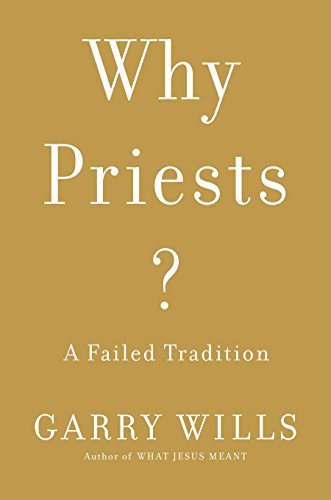 “. . . will be welcomed by many capable of discerning wisdom within advanced argument—while undoubtedly opposed by certain powers that be.”

Garry Wills, once a Jesuit seminarian, answers his titular question with typical boldness. His long career spent explaining St. Augustine, St. Paul, the Gospels, Abraham Lincoln, and American theological and political culture, connects these subjects with attention to rhetoric and fidelity to the classical languages, whose fluency he shares with many of those he studies.

Nearing eighty, Professor Wills respects the priests of today’s Catholic Church, but he disagrees with their claim to a higher rung on the hierarchical ladder—in which their power to change bread and wine in the Eucharist into the body and blood of Jesus—separates these men from the community of believers who join in worship.

He begins his exacting thesis by listing the various “charisms of service” exercised by the men (and women) in the earliest “Jesus movement” after the death of Christ, when without a sacrificial ritual or priests, a fellowship gathered to remember Jesus and to give thanks for the Lord’s blessings until Jesus returned. When this Second Coming did not transpire, long-term organization accelerated.

Dr. Wills explores next, enriched by his recollections (a fine feature humanizing what may have been a technical, theological treatise, as a Jesuit might have penned once), the otherworldly aura taken on by priests of his acquaintance. He wonders how could “men so cosseted, set so on high, deferred to so universally, not come to think of themselves as exceptional beings?”

This mystique in my estimation has been greatly diminished since the reforms of Vatican II and the subsequent secularization of much of Catholic mores in the past half century. More context here would have been welcome, but see his prescient take on this shift, if long before the recent sex scandals that have weakened clerical allure further, in 1971’s Bare Ruined Choirs: Doubt, Prophecy, and Radical Religion.

He notes how the miracle-working forces transmitted to the priest minimized the trickier question, for medieval Catholics, of what happened in the body of the communicant to the “physical actuality” of the Host once ingested, and satirical byways on his learned journey add vigor and insight to his theological project.

The wafer, thin enough to melt on the tongue, removed from the faithful recipient any association with cannibalism, even if the fetishizing of the Precious Blood and Corpus Christi by medieval theologians and liturgists deepened the material substance of the Mass, separating it from the ritual into its own devotions. (I still recall my own childhood with the warning not to chew a Host, lest according to playground rumor it might drip blood inside one’s fearful, carefully closed mouth.)

Thomistic theology sought to explain how this floury material remained in the “accident” of bread even as the substance changed into Christ’s body under the priest’s recapitulation of the sacrifice of Jesus. This became, for Mr. Wills, “the whole point of the faith. It was God among us.” Elevated at the climactic moment of the Mass into the Body of Christ, the “real presence” of Jesus entered into the world, every time a priest said Mass. In turn, Christ entered into the congregation.

This book traces the ramifications of this energy transfer. Henri de Lubac, a Jesuit silenced in 1950 by a nervous Church, wondered as did St. Augustine why the believers attending the Mass did not sanctify this Eucharistic moment, rather than a force emanating from within the Host itself originating in bread. This issue may remain clearer to Garry Wills than some readers despite his learned exertion.

Yet Fr. de Lubac won eventually: The altar with Vatican II turned around so the priest faced the parishioners, and this encouraged, symbolically and practically, a communal rather than priestly participation as all united in the circle of the Mass.

The middle of this study examines the Jewish priesthood in its rabbinical context. Jesus, as a radical prophet, fought the Jerusalem system that thrived on complacent priests, Temple sacrifices, and meticulous rituals. But Jesus could not be a priest, for he was not descended from the Levites. He met opposition from Sadducees, Pharisees, scribes, and priests—and this last class most of all according to Professor Wills—determined to defend the Jewish status quo, to secure their Law and their security under the Roman system, against rebels such as Jesus.

He fought those who had, in the phrase of Malachi, “betrayed their Covenant with the Lord.” The Jewish priests, therefore, killed Christ, for he was a prophet.

Such uncompromising teaching, in Garry Wills’ analysis, does not jibe with the one book in the New Testament (which elsewhere links Jesus to “priest” once) where priests are mentioned eight times in connection with Jesus.

The Letter to Hebrews (no “the,” for as a second generation long after the death of Jesus, it’s addressed not to a coherent geographical group but seems rather an exhortation to wavering believers attempting to keep Mosaic Law while adhering to evolving, more inclusive guidelines for belief and worship) claims insistently that Jesus, while no Levite, nevertheless inherited the charismatic, transformative power given to an enigmatic, fringe figure of Melchizidek, with his cameo in Genesis 14.

This “king of Salem” was in Professor Wills’ term “stretched and inflated” into a mythic predecessor of Christ as High Priest: not of the superseded Jewish people but their triumphant Catholic successors. Yet a pope, bishops, dioceses, and priestly ordination were not established, according to Mr. Wills, by the earliest Christians. An unknown writer did impose the ancient upon the new myth as priest, to promote Jesus in Letter to Hebrews’ “fantastical use” of Melchizidek.

The author, not Paul to whom the Letter has been attributed, appears a sophisticated stylist if an eccentric logician. The same might be said of Garry Wills. He crams a formidable amount of learning into this dense if chatty, work.

The argument leaps, but the general assertion—that the eternal replaces the temporal, and the heavenly the Temple as the reign of the new High Priest who in turn passes his power—persists. This supports, according to the Church that followed the “Followers” who preached without a priestly office or a sacramental sacrifice, the status of those men who made themselves priests in the name of Jesus.

By blood sacrifice, where Christ was both the priest conducting the service and the sacrificial victim, in the Letter’s representation, priests acting in the name of the divine continued this daring conflation.

The intricacies of sacrifice to a god whose will could be altered or persuaded by human offerings, persists as an irrational premise—questioned by the ancients themselves. Complicating this setup, the Christian logic of redemption, with Christ ransoming himself to free sinful humanity, exhausts mortal reason.

This intricacy leads to further complication, as Mr. Wills interprets a verse from Hebrews to mean “the Father advanced his Son as the nexus of atonement.” It requires considerable ability, even by a skilled theologian, to articulate these venerable assertions for readers.

It comes as a relief to return to Professor Wills’ preferred theologian, St. Augustine. His “harmonizing theory” of the Incarnation avers that the Son died physically but not spiritually, as men and women must. Intriguingly, no intermediaries, no priests intervened between the Savior and the saved who believed in him.

This model introduces that of the community favored by the author. It affirms not a “punitive theory” of atonement but one achieved by love. The earliest Christians did not conduct a Mass, but a communal giving of thanks. This ritual can commemorate Christ, in Mr. Wills’ conclusion, without priests.

“If Peter and Paul had no need of priests to love and serve God, neither do we.” Ending the clerical monopoly, the fellowship of believers might release the sacred from its tabernacle. Why limit the power of the sacred, when Jesus reasoned “Whoever is not against us is with us”? (Luke 9: 49-50)

Despite the advanced nature of much of this material, Professor Wills manages to keep his anecdotes fresh and his conversational tone sustained to relieve the theological exegeses and biblical analyses. His translations of the Letter to Hebrews (appended) and other relevant verses and passages from Latin, Greek, and Hebrew sources ancient and medieval display admirable vigor and directness. This book, sure to create controversy, rests on thoughtful, hallowed ground.

It’s refreshing to read this lay theologian’s critique grounded in close analyses of the biblical and early Christian texts of the power asserted by the Catholic priesthood claiming to transform the office of the Jewish establishment two thousand years ago.

Garry Wills seems to raise his revolutionary claims with little consideration of their being implemented, perhaps in a nod to his dogged, scholarly bent.

While I remain unsure about the effect of Professor Wills’ determined argument deployed against the Vatican and nearly two millennia of dominance by Rome and its clerical class, this book challenges one of the most deeply held tenets of the Church, which he loves and wishes to reform, in the spirit of the law rather than its illegitimate letter.

The publication of the latest in a half century of thoughtful books by this retired historian from Northwestern University will be welcomed by many capable of discerning wisdom within advanced argument—while undoubtedly opposed by certain powers that be.