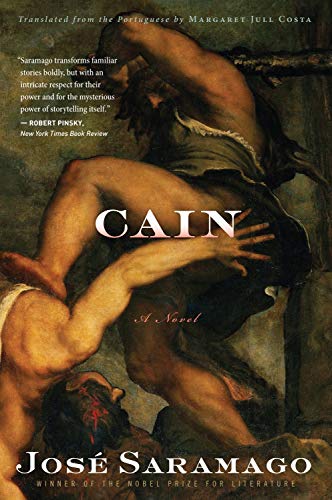 Sentences collapse; commas convey rapid, wry, ironic dialogue. Paragraphs expand into rushes of anger, bewilderment, frustration, and revenge. Cain’s life, one that will not end as God does not let him come to harm as an ironic judgment for the killing of his brother, Abel, upends the Old Testament through furious prose, ideological passion, and desiccated places.

These themes inspired José Saramago’s 1991 revisionist effort, The Gospel According to Jesus Christ. The author, a longtime anarcho-communist and outspoken atheist, left Portugal for Spain after the publication of this Gospel revision angered the Catholic Church. He died a few years later, at 88. This shorter, equally enigmatic 2009 tale, the final one from this Nobel laureate, arrives via Margaret Jull Costa’s fluid translation from Portuguese.

In both novels, a distant, bemused narrator speaks omnisciently about God and his faulty handiwork. Mr. Saramago’s Jesus confronted his divine infusion and his messianic mission with doubt and hesitation, and that novel explored largely the “hidden years” in Nazareth and the desert before Christ’s public ministry. There, the author chose to blend critiques of belief with considerable insight into the comforts of faith, and the humanity shared by such fully drawn characters as Mary Magdalene, whose steady and sexual presence for Jesus eased the demands of a vindictive, crafty, and parochial father figure.

Cain’s story, by comparison, bursts free from its biblical origins; but Mr. Saramago hastens, in two or three pages, to recount the killing of Abel, and the punishment of God, who leaves a black mark on Cain’s forehead as a sign that he is not to be killed by other people, already roaming the plains outside of Eden.

Cain holds his own against his Creator, whom he blames for refusing Cain’s own good natured sacrifice of vegetables rather than Abel’s cattle, and whom Cain holds partially responsible for looking on rather than preventing the first murder. Cain assures his maker that “if I were god, I would repeat every day Blessed are those who choose sedition because theirs is the kingdom of the earth.”

Later in this exchange, the narrator edges in: “Poor Abel, deceived by god. The lord had made some very bad choices when it came to inaugurating the Garden of Eden, in this particular game of roulette everyone had lost, in this target practice for the blind no none had scored.”

Mr. Saramago, as these excerpts show, employs his characteristic use of capitalization, as in Blindness, to refer only to the start of a quote. Unlike Gospel, which used capitalization of proper nouns, and periods to set off dialogue even if paragraphs subsumed it, here only commas set off one speaker from the other.
Capitalization starts a sentence, but that sentence may be very long, interspersing dialogue and narrative with internal capitalization inserted to mark a switch in speaker, but without quotation marks or often clear attribution except in context. This rapid, challenging, but “consciously” appropriate style conveys the flow of thoughts in the mind as much as in conversation, as the narrator and the protagonist shift and blur in their perspectives nimbly, if demanding attention by any reader.

This prose commands the reader by its own subversion of Scripture, as form matches content. Both seek to overthrow traditional models, and to replace them with imaginative ones. Mr. Saramago’s humanism and his championship of the underdog and the rebel remain prominent. He resists authority, and he defends sexual liberation and communal love of family, partner, and neighbor. Cain’s brave acceptance of Lilith as not only Noah’s wife but Cain’s mate provides the most vivid scenes, just as his earlier allegory had enriched the character of Mary Magdalene, similarly maligned by other believers and tellers.

Later, as Cain must leave Lilith to wander as his curse, he intervenes in other events from the book of Genesis. The narrator accounts for this loose itinerary in time and space as Cain moves through “alternate presents.” These, as Cain stumbles first upon the sacrifice of Isaac demanded of Abraham by God, recall themes in Gospel, as God commands the ritual slaughter of those closest to the protagonist.

“What are you doing, you wretch, killing your own son, burning him, it’s the same old story, it starts with a lamb and ends with the murder of the very person you should love most, But the lord made me do it, said Abraham, struggling, Keep still, or I’ll be the one who does the killing, untie that boy at once and beg his forgiveness, Who are you, My name is Cain, I’m the angel who saved Isaac’s life.”

This conversation reveals how Mr. Saramago can extract the core of the story. He polishes it, in prose that forces a reader to look at it differently, as Cain inserts himself into the biblical narrative and wedges himself into these patriarchal stories to undermine their presumptions and prejudices.

They lack, however, some of the resonance in terms of character and description afforded biblical scenes in the earlier novel. Some appear to incorporate the words of Genesis among the narration, and however lofty or direct this familiar, resonant paraphrase, this can edge into summation or recapitulation instead of a fresh take on events so recognizable to many readers of this novel. Many episodes are compressed into this dense tale.

At times this becomes a hasty if memorable tour whisking us past Babel, Sodom, and Jericho under the siege of Joshua trying to halt the sun. We hear but do not feel as we might the depth of Job’s predicament after his first family has been killed and his second one is expected to appease his discomfort and ease his sorrow.

Still, a brief reunion with Lilith offers a welcome return to Mr. Saramago’s skillful use of a female figure to enhance the possibilities of amorous and emotional rewards, and she adds commonsense. Sodom, she learns, has been leveled by divine fire, not only the perverse men, but the innocent women they spurned and their blameless children.

Cain tells her: “Anyway, the innocent are now accustomed to paying for the sinners, The lord seems to have a very strange idea of justice, Yes, the idea of someone who hasn’t the slightest notion of what human justice might be.” Lilith pointedly notes that Cain killed his brother; he admits that God is still the one whom Cain, as a selfish man, holds more responsible as a person fated to carry out what he does in an eternal chain of cause and effect that no human can ultimately control.

This may seem to beg the question, but the Big Questions are not answered, nor can they be, Mr. Saramago seems to say, here anymore than in Gospel. Unlike that story, ending on the Cross at Golgotha, Cain’s tale diverges into a clever and more open-ended direction. Mr. Saramago as the tale reaches its conclusion offers unexpected tension, as Cain finds himself, logically according to God’s life sentence as if in a divine oversight, on Noah’s ark. The climax and ending to this tale, truly novel, I leave for you to learn.