Unprotected Texts: The Bible's Surprising Contradictions About Sex and Desire 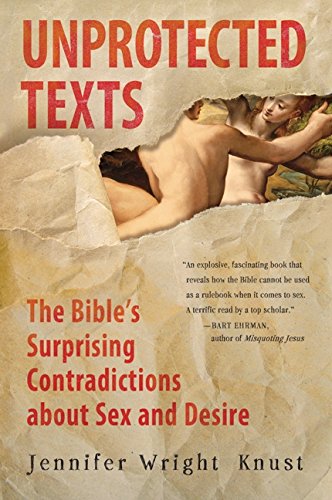 Jennifer Wright Knust, a professor of New Testament and early Christian studies at Boston University and an “American Baptist pastor,” recalls her own shaming as an adolescent for presumed sexual indiscretions when she transferred to a new school. She compares her strict, abstinence-only, fundamentalist upbringing with her adult interpretations of an ancient text. She insists upon a more mature, nuanced understanding that “biblical teachings regarding desire, marriage, and the human body are entirely inconsistent and yet thoroughly fascinating.”

Unsystematically, the Bible does not offer any unified “sexual code” of conduct. While it defines morality, texts may conflict with each other about the people and groups mandated to follow particular precepts. Instead of a single, monolithic arbiter of sexual standards, the Bible for Ms. Knust does not represent the last word on sex and desire any more than on the acceptance of slavery or the reasons for the pain of childbirth.

She dismantles the “sexual guidebook” advocated by literal readings of the Bible by conservatives today. Ms. Knust presents in her first chapter issues about desire, controlled and freed. “The Song of Songs,” followed by the examples of Ruth, Jonathan, and Bathsheba, complicate how eroticism is contained outside the expected family structure. Desire may leap beyond the bounds of matrimony, to aim at another man, a king, a non-Israelite, or a woman not married or married to another.

Marriage, therefore, expands beyond an easy definition. Property rights, in the Middle Eastern patriarchy, dominate views of women as controlled by men, even if as the previous chapter showed, these expectations may be overcome. Male honor and female submission appear stronger as the Bible grows; by New Testament times, celibacy replaces marriage as an ideal. Self-control becomes the Christian recommendation, rather than the Jewish covenant that calls for its tribesmen to achieve immortality through their own progeny. The various viewpoints of marriage and divorce in passages of Mark, Matthew, and Luke are compiled into helpful charts that remind us of their different textual justifications, and of their subtle or obvious divergences.

Paul’s letters complicate his message about the permissibility of marriage and divorce. As an “evil impulse,” the sex drive for early Christians replaced the Jewish blessing of intimacy and the command for fertility with a warning against “sex for its own sake.” Jesus appears to advocate the control of marital desire; Paul and his fellow pastoral writers expect that the end-times will come soon, and therefore anticipate a new age when sex will not be necessary, as bodies themselves will have been transformed into sexless entities.

Widows, wives, and virgins all receive instruction; meanwhile, within the new Jewish and gentile convert communities, as to how to reconcile control of passion licitly, if they cannot resist marriage at the risk of extramarital damnation. Again, a chart delineates how advice on sex, desire, and marriage in Paul differs from the letters attributed to him from those pseudonymously credited as Colossians and Ephesians, and then compared to other pastoral letters in the New Testament. These bolster Ms. Knust’s claims for a diverse collection of constraints or permissions on these topics.

For the Old Testament, the Jewish lists of malefactors against sexual statutes makes for challenging interpretations. Religious misbehavior often overlaps with illicit sex, according to what non-Israelites and gentiles practice.

Ms. Knust, in her fourth chapter, disappoints those who seek a harbinger of sexual liberation in a Levantine or Mediterranean cult of sacred prostitution, despite the fulminations of Jewish prophets and Christian preachers. Prostitution may have been popular, but Ms. Knust carefully dismantles any sacral role, based on non-biblical texts as comparisons to the rhetoric of biblical moralists.

Instead, the enemies of Israel or of Christians earn the disgust of the faithful who tend to equate monotheism with fidelity, and paganism with debauchery. Idolators become confused in biblical texts with prostitutes, incest and forbidden unions find a range of permissive as well as prohibited forms, and perversion overlaps between sexual transgressions and the ritual customs of those outside the Abrahamic covenant, the Mosaic law, or the Christian community.

What is the worst imaginable sin in the Bible? A surprising answer: humans mating with angels. Ms. Knust begins her fifth chapter by exposing this crime. Sodomy, a term notorious but also erroneous, can be blamed not on the Almighty’s aversion to male-male sex but the cultural sin against hospitality as that city’s wickedness lay in the attempted violation of angelic visitors, guests of Lot, rather than the Sodomite’s threat to rape the males in Lot’s house who merited his protection. After all, Lot offered his two daughters’ virginity as a bargain to appease the selfish and lustful citizenry.

Mating and marrying outside the tribe mattered often not at all if the men were Israelite and the women not. What was allowed or condemned tended to depend on whether the fleshly progeny that may result from dalliances or alliances could be traced to its claims as reliably Jewish property. Land, goods, and power grew in this fashion for the Jewish people.

But when Israel felt threatened by assimilation, the acquisition of foreign wives and wayward women among the Canaanites and surrounding enemies, as defined by the Jewish community, stood for danger. Degeneration of the race feared, the stranger turns enemy: lest acceptance brings him or her in to the wary tribe as a friend, an intimate, a rival, or a beloved. Old Testament passages inveigh against the lure of the exotic; the careful proscriptions against mixing, against crossing boundaries characterize Leviticus.

Foreskins, semen, and menstrual blood accordingly elicit minute attention for Jewish legalists and Christian dogmatists. Ms. Knust’s final chapter examines these attitudes towards parts of the body, and what they stand for, emit, and permit for those faithful to a covenant of blood or baptism. As that arrangement shifts within the Christian revelation and revision, circumcision alters from an outward identifier for Jewish membership into a inner symbol, one that can no longer be demanded as an telling signifier as gentiles enter and finally dominate the new Church. Ms. Knust in this section excels. She interprets the evolution of circumcision within the Jewish and Christian communities, both charged with fulfilling a command that itself becomes superseded as the latter denomination separates from its origins and the ceremony transforms into a negotiable set of interpretations.

While readable, at times Ms. Knust’s own interpretations rely on what is left less immediately accessible to readers. She may enumerate with an endnote to a scholarly article her support for a claim, a defined term, a word that escapes easy translation, but her own narrative would have benefited from more elaboration, if not within the chapters than in her notes, of textual cruxes.

Similar to Michael Coogan’s recent God and Sex: What the Bible Really Says, Ms. Knust amasses sifted evidence but she discusses it in the appendix inconsistently. On homosexuality, she often rushes through material that deserves elucidation; about non-procreative heterosexual activity, despite the hints of her preface, her book oddly stays nearly silent.

Concluding, she rejects any reduction of this diverse set of texts over centuries and peoples into a consistent arrangement of dogmatic assertions. The imperfection of a Bible that Ms. Knust does not regard apparently as divinely dictated but humanly flawed only heightens its relevance.

She encourages an openness “to the divine Word instead of closing our minds and hearts by acting as if we already know what God thinks and wants.”

She argues for a readership mature enough not to accept the stoning of Jezebel any more than it would support slavery by chapter and verse.

Ms. Knust hopes for a higher regard for the marginalized, the persecuted, and the harried in the biblical texts to balance the conventional roles assumed by patriarchs, prophets and preachers, themselves in this exegesis shown to be as full of foibles as those they harass, harangue, and harm.