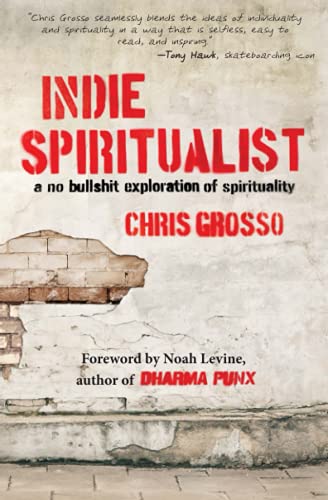 “His genial, heartfelt, but blunt tone may shake up those long wearied by gentler inspirational tales.”

Subtitled as a "no bullshit exploration of spirituality," Indie Spiritualist unsurprisingly addresses those who have felt disappointed by mainstream denominations and New Age inventions.

Chris Grosso, an indie rock musician and a former addict, speaks to those who may share his restless quest. It has led him down a loosely Hindu path, one that mixes Eastern and Buddhist concepts with an eclectic embrace of similar seekers and peacemakers. Noah Levine, a kindred spirit who ministers to the marginalized and those often turning to sobriety, introduces Grosso's depiction of the Buddha as an "indie spiritualist," one who "walked away from the spiritual and religious circles of his time and found his own path."

Coming of age in 1980s Connecticut, Grosso, with his "deeply ingrained question everything punk-rock mind-set," is spurred to question lifestyles and doctrines. He sustains respect for those teachers and methods which fail to resonate with him, while he encourages dissatisfied searchers to consider his difficult past and his fulfilling present as he weathers drugs and drink to find a family and a calling. He gathers on his website interviews with musicians and clergy, and this book may have adapted his personal essays, organized chronologically as a memoir as well as a journal of his quest.

He defines an indie spiritualist as "someone who honors the spiritual truth within themselves" no matter what others may think. Although spiritual, Grosso eschews the "exceedingly positive love-and-light movement or the dogmatic tenets of spiritual and religious traditions." Instead, he finds in a rougher, edgier, and often much louder milieu his intellectual and musical satisfaction. "So much of this so-called spirituality is presented as pretty and cosmetic, and basically is to spirituality what Jersey Shore is to reality."

He credits a Van Halen concert, with a 20-minute guitar solo, as one amplified gateway into elation. This engagement with the mosh pit and the mass energy of rock, as well as the gentler flow of the Hindu kirtan musical ceremony he favors now, offers a refreshing contrast and a necessary outreach to similarly minded people who love music, loud or soft, as one avenue into the mystic, and into the thunder, where Grosso reminds us the spirit can also roam.

As one may expect from the subtitle and the audience for this book, Grosso makes no apologies for his vocabulary. He tries to discard the cant and smug piety of spiritual rhetoric. Despite in this collection a tendency (which he may well agree with) to ramble and belabor the point of an often familiar story of hard times followed by a passage through pain and fear into devotion and renewal, his genial, heartfelt, but blunt tone may shake up those long wearied by gentler inspirational tales.

Recounting his years of being trapped in a failing body and a mind clouded by poisons, Grosso tries to throw off what he clings to. Yet he still insists on staring down the ugly. He promotes both "beautiful and the disgusting" qualities of a life accepted without boundaries or denials. He confesses: "I say 'us' because I'm tired of writing as if I actually believe in the illusion of you and me."

He challenges his readers to "embrace all the beauty, terror, and weirdness exactly as it is." Grosso appends, as a reader who finishes this account will expect, a wide-ranging (if for this rock fan a bit too recent in its tilt, but that may be his indie rock vs. this reviewer's) set of musical and literary recommendations.

For curious readers and listeners these may lead inquirers further down Grasso's road, where the esoteric empowerment of the New Age sidles into rowdier and more confrontational skate-punk and hip-hop scenes. (Notwithstanding his aspersions earlier in the text, the publisher's imprint and the bent of much of these "alternative" contents intersect the tattooed and the pierced with name-brand gurus and counter-cultural texts familiar to earlier seekers.)

Like many in recovery, Chris Grosso struggles to learn love and to bond with others who suffer. He tries to enter a state of acceptance of the frailties all creatures share, while he attempts to leave behind self-recrimination and endlessly condemning himself for past failures. He champions a "capacity for emotional sobriety."

This pattern, repeated for centuries in the stories of those who have turned their lives around to find a spiritual path leading them to a hard-won inner peace, places Indie Spiritualist (apart from its cutting-edge inclusion of QR links to YouTube videos and Grosso's music) within a venerable rhetorical pattern St. Augustine might have recognized from his hallowed Confessions.