Mixing Minds: The Power of Relationship in Psychoanalysis and Buddhism 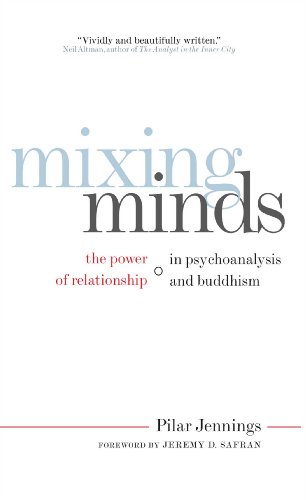 As an analyst and analysand, who since her unconventional childhood has meditated and studied Buddhism, Pilar Jennings brings her professional expertise and personal experience into this rewarding, if challenging, study.

Her background in both insight (vipassana) and Tibetan approaches to Buddhism enriches her clinical case studies and psychiatric applications. The result opens up methods where dialogue—and confrontation with the self amid others in the journey toward psychic healing and spiritual integration—presents advocates of these traditions with possibilities of how they may co-exist more harmoniously. In Buddhism and psychiatry, interpersonal relationships matter most for her.

She begins with her own story. Dr. Jennings emphasizes that no mature understanding of psychoanalysis or Buddhism can rely on facile summaries. Her study, grounded in theory but alighting on her everyday life, delves into both approaches.

Here, a student and teacher, patient and doctor, come together to help the injured recover a sense of wholeness. She favors emptiness, a fundamental dharma concept, as essential. She suggests that counselors open themselves and their clients up to a more playful, open-ended evolution of their psychic encounters into the “pregnant void” where the fluid Buddhist model, of no-self and impermanence, allows more freedom for both the expert provider and the searching supplicant.

Jennings advises psychoanalysts to learn from the confusion that accompanies—and not only precedes, as is conventionally assumed—the entry into enlightenment. While aware of the suspicion with which traditional Freudian analysts have regarded religion (and she defends Buddhism as such in a flexible manner), she seeks to incorporate a scattered, uncertain aspect into the realistic that analysts may pose for their analysands.

Coming apart within, she reasons, for a Western psyche, may be more realistic a steady state than an Eastern supposition of going beyond strife caused by culturally and intellectually very different experiences than those which lamas and gurus may have had to contend with in their original cultural and familial milieux.

Coming to terms with a self which learns not to trust in fixed goals or settled moods may help fragmented Westerners, whether or not Buddhist practitioners, to understand as lived behavior these arcane concepts of “no-self” and “emptiness.” About emptiness, she observes “that all phenomena, including healing systems, are empty of inherent meaning and are rather a constant flux of changing causes, circumstances, and conditions. What Buddhism and psychoanalysis are and can provide will mix with the setting, the consciousness, and the unconscious of the practitioner.”

Her wisdom, as a professional and as a student, a Buddhist and a clinician, appears hard-won, and sometimes easily lost. That is, Dr. Jennings wrestles with the material she teaches here. Fixed answers and pat theories elude her grasp.

Heinz Kohut’s empathetic model of analysis relies on equally fluid responses by the pair involved in taking on this journey within one’s psyche and through one’s companions; Jennings adapts this dyad into the ancient set-up by which, ever since the historical Buddha lived 2,500 years ago, the dharma has been taught, by word of mouth, from teacher to student in a direct chain of transmission.

The Tibetan tradition Jennings now practices follows this time-tested method. The trust that the student must place in his or her “spiritual friend,” she explains, reflects that of an analysand. Such resonances provide ways in which the cultural impacts, when the dharma becomes exported and sometimes distorted when impatient Westerners seek to escape psychic struggles by plunging into meditation, may be more fully respected by those fully aware of the nuances of Asian Buddhist cultures and how these do and do not transfer into Western applications.

Many of her Western Buddhist peers, Dr. Jennings cautions, run too rapidly away from psychological healing into spiritual techniques, while these seekers may fail to appreciate the damage they may do when they misinterpret what “no-self” and “emptiness” may truly mean. Jennings skillfully navigates between these Buddhist teachings and psychological inheritances. She sums up basic dharma well, and she contrasts and compares its instructions with Freudian-influenced schools of psychiatry deftly.

However, she refers to Jungian insights into the numinous more in passing; she offers enough to spark curiosity, but then skips away from the resonances that remain. She intervenes, imposes Cartesian limits upon such psychic suppositions as Jung entertained, and she veers off sharply for a hundred pages before mentioning his more open-ended suggestions again.

Appearing to favor Freudian-derived responses, Dr. Jennings reveals her own preferences, but the appeal of Jung for many Westerners also pursuing Buddhism leaves this fruitful topic underexamined. The relationship of Buddhist-inspired applications to Western analysands from a New Age or Eastern-tinged background, as well as Asians growing up in the global diaspora’s modern mindsets, signals a realm for inquiry that Jennings’ pioneering work may direct future researchers to investigate.

Meanwhile, she pursues the dangers along with the rewards. She speaks often of her own combative relationship with ‘‘her lama” and intersperses glimpses of her own frustrations as an analysand as well as an analyst in hectic, post-9/11 New York City. From her years as an insight (vipassana) meditator, Jennings now finds that its practitioners may confues its much-touted “mindfulness” with a realization of psychological well-being that itself may prove illusory. Spiritual freedom, she muses, may mask unresolved anxieties that the practitioner has fled or masked within the unconscious.

The power of the unexamined mental constructs within us, Jennings warns, may be worsened if anger persists but is glossed over or sidestepped. Instead, she suggests, the Buddhist parallel of taking on anger to break it apart—rather than averting one’s gaze from it and its effects and its objects—may be the only way to gain a difficult, perhaps endlessly delayed, wholeness that comes from not so much ending anger as coming to terms with its psychic energy and practical impacts.

For desire, as with suffering and with anger, she compares Buddhist responses with those studied by her colleagues. The gap between what one wishes to gain and the mundane knowledge that nothing gained lasts forever represents real life. Dependent origin, the cause-and-effect relationship at the heart of dharma, connects with the student learning from the lama: a model of interdependence rather than self-reliance (taught to Westerners as their assertive, secular ideal ever since the Enlightenment) becomes for Jennings the aspiration better fitted to humbler, spiritually yearning, and psychologically broken people today.

Therefore, Dr. Jennings offers analysts a space where limits of any model can be acknowledged. Rather than grasping one theory, one outcome, one regimen, she urges the pair to shed mental delusions that enlightenment or wholeness precludes a continuation of the psychic struggle. No blissful end of days awaits, for her mind. Jennings cannot accept this entry into detached contentment as a viable, probable, or practical resolution.

By studying the causes of suffering, suffering can be understood. It cannot be escaped or overcome. Instead, how one reacts to suffering proves the solution. Shedding delusion means to grow up and realize that enlightenment may be, for Westerners accustomed to salvific journeys, the only happy ending, and one less free of care than one may expect.

For Pilar Jennings, the Buddhist perspective, sharpened over thousands of years, intersects a century of psychological theories and clinical trials and case studies.

For the informed analyst, who may increasingly be cognizant of Buddhism among his or her Western patients, and who may even practice it, the augmentation of dharma with analysis serves as a harbinger of the meeting of true minds, as these venerable energies mix and blend.