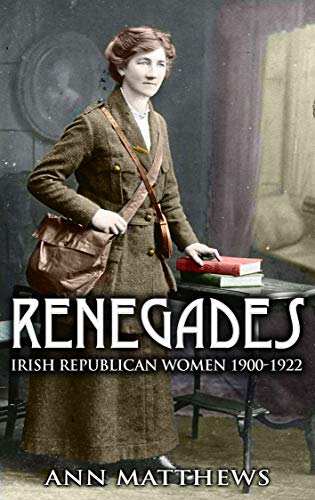 Coverage of women’s contributions to the struggle for Irish independence early last century harps on two names: Maud Gonne and the Countess Constance de Markievicz. These two genteel ladies managed to reinvent themselves, in their thirties and at forty respectively, into Joan of Arc characters, on a mission to liberate the Irish from the British. Ann Matthews regards both figures as far more self-absorbed than earlier historians have judged them.

Gonne and de Markievicz disguised their own English backgrounds. They directed themselves as leading ladies in a martial performance, with the Irish as supporting cast and spectators, and the British as the villains. Their fiery rhetoric roused crowds, as they rallied the people of their adopted homeland to a brutal, desperate conflict. To widen the stage long dominated by their strident egotism, Matthews focuses upon the role of women who waited in the wings, second-billed, as thousands of extras, as spear-carriers.

Her narrative moves quickly, as she covers the rise of the Gaelic League, the Inghinidhe na h’Éireann (“Daughters of Ireland”), and community activism that hastened participation of women in the Easter Rising of 1916. Matthews, as with Fearghal McGarry’s The Rising (also reviewed by me on NYJB), draws upon witness testimonies recently released by the Bureau of Military History. These accounts, as well as memoirs and correspondence, show Dr. Matthews’ concentration upon primary sources for her dissertation, revised into this study.

The rise of a middle class offered careers for many women. Running an empire meant technology, typewriters, and white collar employment. In 1861, the Royal Post Office and British government counted 8% of its workforce as female. By 1900, this stood at 50%. Women, beginning to free themselves from propriety, attended Irish-language lessons of the Gaelic League. As these often popularized a cultural nationalism as a vehicle for militant republicanism, along with an increasingly pervasive tilt toward triumphant Catholicism, many women became politicized.

In the ranks of those in the Rising, only two females appeared in uniform, one of whom was the Countess in her own motley garb. But, by ignorance or cunning using the flag of the Red Cross sometimes to send messages to rebels behind the barricades of imploding Dublin in 1916, civilian women often showed courage under fire. Their sons, husbands, and fathers fought with rifles, but the women fought with equal courage against great odds.

After the failed Rising, a few women were arrested and a handful were interned. Some of these were the leaders of the faction most opposed to a second end to hostilities a few years later. Michael Collins and his delegation settled on a controversial treaty. Its compromise with a partitioned border and dominion status for an Irish Free State within the Commonwealth was met with bitter defiance by hardline republicans.

Matthews shows how the Irish Women’s Council, Cumann na mBan, manipulated its own record-keeping for propaganda and posterity to make it seem that more women delegates opposed the Treaty than appears to have been the fact. While her book ends before the 1922–23 Irish Civil War that followed the Treaty’s acceptance by a slim majority of the Dáil Éireann, the Irish Parliament. Matthews documents how some women elected to the Dáil took strident and hostile stances towards any compromise. They vowed to fight against the pro-Treaty Free State, to bring about nothing less than total independence for the entire island.

While Matthews’ account resists analyzing the psychology of why this defiance was so ingrained among so many men as well as women, she sums up the evidence of the Dáil Debates on the Treaty. “Their speeches were a combination of emotional entreaty on behalf of the dead men and hectoring on behalf of the same dead men.” The term “tirade” in her narrative repeats. “Tortuous verbiage” characterizes many impassioned rebuttals to those who would accept partial independence rather than the Irish Republic fought for by the 1916 rebels and their comrades from 1919–1921.

Charts, maps, and photographs enhance this volume; it will serve as a necessary reference for scholars of Irish republicanism, women’s studies, and political history. Matthews incorporates her sources smoothly. Her narrative avoids theoretical cant and anachronistic judgment.

Yet, one wonders why these women fought so vehemently against the Treaty on behalf of their dead men. This study lacks a comparative perspective. How did the Irish struggle—with its role played by women as activists, rebels, and politicians—compare with other revolutionary uprisings? Early in the 20th century, was Ireland a pioneer in the prominence given to roles played by women to advance an anti-imperialist, originally anti-capitalist, and democratically socialist campaign? How did a society in which late-Victorian and traditionally Catholic pieties controlling women’s social and moral activities contrast with the sight of a gentry lady in full uniform, or with women alongside men in the Dáil at a time when women’s suffrage had barely been passed in the United States, for example?

Focused on primary sources where the women may not have articulated such contexts or concerns, Dr. Matthews’ content often tends toward presentation rather than interpretation. Its strength as a direct explanation of what women did back then may be a slight weakness for we hear little of why and how these women devoted themselves so diligently to the struggle. How they managed to do so, while raising children, making a living, and conducting their duties within a traditional, devout, and hierarchical society remains a mystery in many of these pages.

Matthews emphasizes what historical records reveal. She relies on what was written down or dictated; this concentration highlights public admissions rather than private hopes and fears. Yet, these emerge in one chapter that constitutes what will likely be the most noteworthy section of this study. During the 1919–1921 conflict, when British auxiliary “Black and Tan” troops demobilized from the Great War were recruited to attack the Irish Republican Army, attacks were perpetrated against women, in physical and emotional abuse as well as assault and rape. Shortly after, an investigation funded by Republicans was seen, correctly as Matthews avers, as biased as it failed to relate any Republican violence against women.

The British Labor Party conducted its own inquiry. These reports reveal crimes on both sides. As with propaganda of Maud Gonne and Countess de Markievicz as Fenian patriots untainted by British pedigree, so with the Republican forces as entirely noble, chaste heirs to the fighting Fenian tradition. This guerrilla war tarnished both rebel and imperialist. Often, as in the Civil War to come, Irishmen and Irishwomen in this small nation fought against their neighbors.

The narrative halts after the Treaty is passed in 1922, but as Dr. Matthews concludes, this led to decades of Irish internecine conflict that in our new century have yet to fully end.