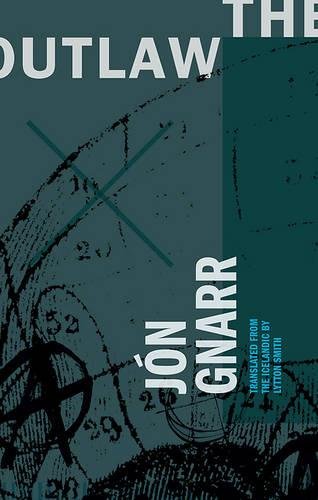 “Free of Vikings, Björk, or enraptured paeans to volcanic landscapes and icy shores, The Outlaw presents Iceland as experienced by a troubled boy. In its daily humdrum as well as its highlighted moments, Jón Gnarr turns to his real and possibly imagined past, and calmly lets the memories flow.”

Gnarr integrates fiction into the facts of his life. Although classified under the former category, the back cover lists it under autobiography and biography. This fits the elusive nature of the third of Jón Gnarr's version of his coming of age. The Indian captured the sensibility of a child limited by sensory disorders, but unable to make sense of his dyslexia. The Pirate took Gnarr into adolescence. Outbursts ensued. That tale ended suddenly, for his parents assured him he'd be better off at a boarding school.

The Outlaw begins with his plane ride, along with other disheveled peers. Gnarr wears his leather jacket and not much more. When he arrives in the Icelandic north, he notices that the school's windows are barred. For this is a detention center. There, Lytton Smith continues his nuanced translation of Gnarr’s backstory.

Both author and interpreter render in spare prose the demotic despair of a boy shunted aside by most others. The narrative unfolds modestly; it's as if we are reading a journal, listening to Gnarr’s chronologically arranged thoughts as his vocabulary and his thoughts multiply, as well as perusing a tale which evokes with precision the angst and the joys, the despair and hopes, of youth.

"Sometimes we went back to class, sometimes we didn't. It didn't make any difference." His one book remains the Tao Te Ching. Preferring English lessons to Icelandic, let alone Danish, Gnarr longs to read rock lyrics, anarchist texts, and Mikhail Bakunin. He smokes, he cuts himself, he fantasizes vaguely.

Meanwhile, rejected by girls as his hormones alter, Gnarr struggles to find a purpose, "I did my utmost to inform and educate my classmates about the importance and excellence of Crass." His album presentation to his fellow residents finds none of them in attendance. Jónsi Punk, as he styles himself, continues the story line of the previous installment, where the ideals of punk and anarchism Gnarr cherished nonetheless, to his early teenage disappointment, clashed with the dreary, oppressive demands of homework and parents. Maturing, he finds half this world changed. "In a flash, all girls, and women too, had turned into sexual beings." Anarchism loses its appeal. "I had a new obsession."

Notwithstanding, the Gnarr telling us of his formation enables readers to return to their own confusion, when asking for condoms at a drugstore loomed as if impossible. Gnarr recreates the "beehive" in one's brain, as a younger self mulls over what an invitation to go up to another's room means. As before in his chronicle, the basic similarities within the humans he lives among unsettle him.

His father, a policeman, inflicted violence. Verbal, not physical, but this generates empathy and morality in Gnarr. (He goes on to take his mother's nickname for his middle name as his own, rejecting his patronymic. This decision conveys Gnarr’s determination to stand on his own.) Meanwhile, back sometime in the early eighties, he returns home. His room has been lent out to guests, his mother informs him. "I was an outlaw." Therefore, he breaks into houses, although he does not steal. Yet.

The typical Big Questions about the meaning of existence, the drive to mate, and the lack for Jón of any god preoccupy his bored reveries. Back at the center, he hopes for affection from a girl smitten with John Lennon. A drama teacher encourages his entry into "a new language" enacted on the stage. His itchy fingers, however, lure him into pilfering at the local candy store, and his fame then halts.

For the last third of this account, at 16 Gnarr describes a particularly delicate operation, more run-ins with the authorities, a job that lasts for him but an hour, and more jobs that come and go. His failed schooling leaves him with few options to better himself, and he falls into another form of self-abuse.

His attempts to raise the consciousness of workers through Leninism meet the same success as his evangelical work on behalf of anarchism. Crass gives way to Bauhaus and new wave. As if a Beckett character, he takes up a post in a psychiatric ward. His lassitude fades. "I didn't want to sleep. I didn't want to miss a thing." Gnarr leaves this section of the transformation of his earlier self as suddenly as the second book's telling. Hospitals again draw him in, and again, his brain plays tricks.

Marketed as a trilogy, this concludes like a television series third season. The lack of resolution suggests another round of stories, even if the show runner for the Jón Gnarr "based on a true story" saga quits for a career that can be scanned in the author's information preceding this review.

Free of Vikings, Björk, or enraptured paeans to volcanic landscapes and icy shores, The Outlaw presents Iceland as experienced by a troubled boy. In its daily humdrum as well as its highlighted moments, Jón Gnarr turns to his real and possibly imagined past, and calmly lets the memories flow.