The University: An Illustrated History 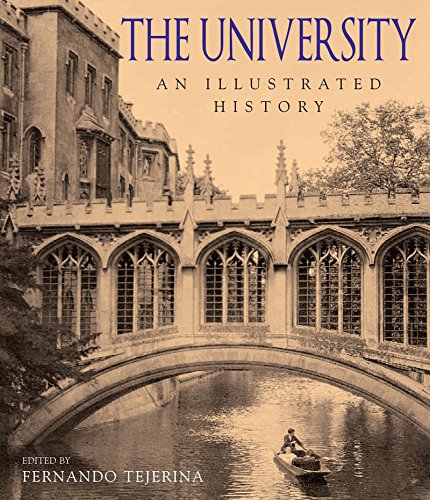 Fernando Tejerina edits this first single-volume survey of the evolution and current state of institutions of higher learning. Nearly 40 contributors provide in-depth chapters as well as shorter essays covering mainly European contexts, but with a markedly Hispanic perspective. This large-format compendium, handsomely designed and translated from Spanish by Kate Angus and Mike Escárzaga, therefore provides a Spanish and Latin American emphasis that opens up a fresh perspective upon what often has been presumed to be a British, French, or German-dominated system in its traditions and prestige.

Earlier centuries gain less coverage than later ones; however, as Pablo Campos Sotelo summarizes, during the Middle Ages, masters and students formed a “universitatas magistrorum et discipulorum” as a city guild. The Oxbridge model still follows this communal ideal, as a training ground for the ruling elite. Ignacio Sotelo reminds readers how the “know-how” of those who ran the realm has been inculcated by not the power of the sword, but by “noblesse de robe,” the “majesty of the gown.”

While Chaucer, with his famous tale from an Oxford clerk, gleans barely an aside, Cervantes, with his references in Don Quixote to the University of Salamanca, earns his own essay by Luís E. Rodríguez-San Pedro Bezares. Illustrations and details plucked from legal depositions and popular culture enrich these early centuries, when so many students remained anonymous. Candida Höfer’s dazzling photographs of the libraries at the Swiss Abbey of St. Gall and Trinity College in Dublin typify the graphic support this volume generously offers. Such illustrations expand the contexts to portray the ideal of the enclosed place set aside for learning, even as it became urbanized and then secularized.

The ideal of the monastic cloister, as Pablo Campos Sotelo explains, left its impact upon architecture. The quadrangle remained the pattern for many universities, as the shelter of the walls enabled the students and masters to pursue their own endeavors separated from the cities that began to grow up around cloisters and colleges. Mr. Sotelo shifts from this venerable template to the virtual university constructed today, and as with other contributors, he contemplates the meaning of this transformation.

Financed by the Spanish-founded Eurozone banking giant Banco Santander, this book provides an example of where also the Old World stretches into the New through university expansion. It documents in its many illustrations as well as its texts the story of European integration into native modes of learning. It covers the elimination also of previous indigenous methods, as in Luis Ugalde’s entry on the Jesuit role in Latin American education, or Manuel Burga’s essay on the Inca string “quipu” as a mnemonic accounting tool.

The Spanish accent throughout encourages the reader to respond to this educational innovation through byways and sidebars that may be less familiar to many English-language audiences. For instance, Manuel Tello debates the tension entering emerging nations now as they consider state-funded vs. private or for-profit models. Whether higher education under capitalism should be considered a public good or a private commodity informs his discussion. Joseb Jărab, as a Czech who was educated under the Soviet regime, narrates this story from his own experience. Within later chapters, the impact of global education on African, Indian, Chinese, and Middle Eastern campuses receives related attention.

The North American model, based often on massive dormitories near large classrooms, but following European patterns of research for large state-funded projects, emerged from a clash between two definitions of a university. John R. Thelin contrasts the forward-looking research university that in the late 19th century emerged as a rival to the smaller, traditional colleges often reliant on rote pedagogy. Johns Hopkins and the University of Chicago typify this new university, determined to pursue research and graduate studies with fewer undergraduates and far more specialized, advanced fields.

Today, as Enrique García Santo-Tomás reminds humanities scholars, relevance remains essential if a discipline is to escape the dead ends of theory, contention among schools of thought, and media which may not advance to keep pace with the virtual arena and electronic databases which enliven the sciences. He urges liberal arts to adapt. The photograph of the Mare Nostrum supercomputer in a former chapel in Barcelona symbolizes this humanistic transition across the cyber-linked frontier.

This elegant tribute to the past, present, and future of the university should inform many who study at, graduate from, and teach at such institutions. A few shortcomings persist. As a medievalist, perhaps I paid closest attention to these sections, but I found a few errors. For example, medieval French abbey at Cluny housed not “black-clad friars” but Benedictine monks; by comparison, Dominicans are not “monks” but friars. The “Carmina Burana,” based on medieval songs by wandering scholars, was composed by not “Karl” but Carl Orff. Finally, the lack of any introduction by the editor, Mr. Tejerina, plunges the reader immediately into ancient science, somewhat disconcertingly, as this hefty volume opens.

I welcomed this volume for its global range, its historical perspective, and its contemporary focus. It reminds readers of the nobility of the pursuit which matriculation, degrees, dissertations, tenure, and grants may represent at their best, however rarely. Finally, it appeals to the wonder that many of its libraries, towers, and quadrangles continue to aspire to as repositories for creative inventions, necessary careers, practical ambitions, idealistic schemes—and even utopian visions to become reality.