The Scientific Buddha: His Short and Happy Life (The Terry Lectures Series) 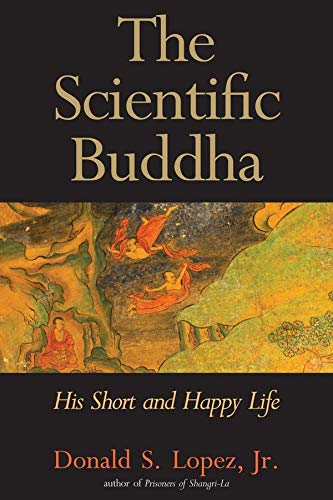 “. . . full of sly, scholarly challenges to the common wisdom peddled as dharma, karma, and nirvana.”

Professor Donald Lopez investigates the past century and a half of how the West invents a Buddha in its own image with typical incisiveness: “Why do we yearn for the teachings of an itinerant mendicant in Iron Age India, even of such profound insight to somehow anticipate the formulae of Einstein?”

Dr. Lopez proposes a revised version of Buddhist thought in these 2008 Terry Lectures at Yale, established in 1905 to examine “religion in the light of science and philosophy.” He examines cultural impacts and purportedly scientific shifts in modern reception of a congenial Buddhism which tallies as rational, mindful, and practical.

He explains how in the 1840s European scholars began to analyze Eastern texts in their original languages. Philology applied scientific approaches, correcting misconceptions from missionaries, explorers, and merchants. “The myriad idols coalesced into a simple figure, who then became an historical figure, a founder of a religion, and a superstition became a philosophy. This is what used to be described unequivocally as progress.”

A textually based and earnestly fundamentalist Buddhism emerged to compete against Christian claims to reasoned inquiry and factual verification. A “primitive,” humane, and historical Buddha emerged, as a founder of a progressive tradition ideal for the scientific, secular age. Westerners—aided recently by certain Asians—rushed to credit this reconstructed Buddha with prescient insights from “a natural law of the mechanisms of the universe to the structure of the atom, from morality to the deepest workings of the human mind.”

After this survey of a manufactured scientific Buddha, Donald Lopez examines the problem of karma. Darwinism ensures a species’ survival by random mutation and natural selection, whereas Buddhism encourages natural extinction. It insists that creation must lead to cessation, an end to attachments by “conscious intervention” of the advanced sentient being. Darwinism finds physical endangerment in pollution; sentient beings in Buddhism find mental entanglement in preservation by karmic perpetuation by polluting desires for permanence rather than liberation.

This conservative tendency sustains the Buddha’s teaching while disclaiming whatever innovations keep it adapting for 25 centuries. Confronting this mindset, Dr. Lopez encourages not harmony with science, but incompatibility.

He rejects “mindfulness” and quantum analogies by medical and pop-culture practitioners. He proposes “seeking extinction rather than survival, seeing persistence only in impermanence, stressing intention over compulsion, consciousness over matter.” This potent Buddhism may enable its power to remain metaphysical, “beyond the world, completely at odds with the world, and with science.”

Rather than expect an ancient wanderer’s mentality to anticipate Newton, then Einstein, particle physics, and the Big Bang, Professor Lopez prefers the honesty of rejecting earnest efforts to make the dharma a “post-scientific religion, the one religion that has withstood the critique of science.”

As a counterevolutionary, the Buddha sought “to escape the burning house” of birth, death, and rebirth. He wanted to extinguish life to free it from suffering. He desired to eradicate the selfish gene of self-perpetuation.

An interlude in these linked lectures follows. This elucidates categories of meditation, and—similar to Owen Flanagan’s The Bodhisattva’s Brain (2012)—Donald Lopez diminishes the prevalence for the ordinary adept of meditation, promoting the ethical imperative and communal necessity of acting upon compelling insights gained from the tradition.

He also dismisses “stress reduction” peddled by wellness providers. Meditation seeks to hammer home in a “non-judgmental” manner a renunciation of “all the objects of ordinary experience” as scarred by the “three marks” of reality in Buddhist teaching: “impermanence, suffering, and no-self.”

If the Buddha had wanted us to bathe or floss, “two millennia ago he would have set forth the Indoor Plumbing Sutra and the Lotus of Good Dental Hygiene.”

Instead, Dr. Lopez rejects “false resonances” of karma with evolutionary theory, emptiness with physics, and antiquated cosmology with contemporary astronomy.

Yet he pauses with a provocative if elusive suggestion, advocating research that delves into the “irretrievable” findings of meditating monastics. He wonders how this might somehow translate beyond verbal articulation into scientific data.

Finally, Donald Lopez rejects the Victorian construct of the Buddha. This emanation’s time has passed. The Buddha, in author Lopez’s estimation, leads beings compassionately towards their own extinction. This liberation cannot coexist with perpetuation.

Morally, concern for one’s self brings one to Buddhahood. From there, the enlightened being shepherds others along the path to nirvana. “The sucker is exalted to the rank of savior.”

This engaging series of lectures demonstrates the appeal of the Buddha and how this venerable icon has been remodeled to please modern desires. With references to Moby Dick and Google search, Viagra and a curious apocalypse of “third-grade tyranny,” The Scientific Buddha sustains in characteristically lively fashion Donald S. Lopez, Jr.’s contributions to Buddhist studies, furthering his career full of sly, scholarly challenges to the common wisdom peddled as dharma, karma, and nirvana.