Istanbul: City of Majesty at the Crossroads of the World 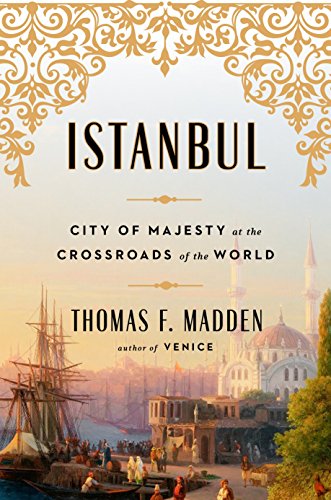 This city has captured headlines again this past year. Turkey’s tumult reminds readers of the position it occupies between East and West. For thousands of years, its traditional center has been the metropolis that has gone by more than one symbolic name. Each resonates with power from an era.

Historian Thomas F. Madden swerves from his recent survey of another port of contention, Venice, to that which long balanced and challenged it for domination in the middle seas of the Eurasian realms. He introduces a place that in “its many incarnations” passed from “a den of debauchery, a city of saints, a smoldering ruin, and a glistening capital of two empires.” Most of the professor’s prose is less colorful and more sober. He divides his study into evenly segmented chapters, so as not to give too much attention to any particular period. This streamlines his approach and paces the flow better.

The city’s oldest traces belie more familiar associations. The symbol of the moon and star, now white against the flag of the Turkish Republic’s red, did not originate with the Muslim conquest, as most of us surely assume. The lunar and celestial combinations commemorate the ancient Greek outpost’s victory under Alexander the Great’s father. They stand for Hecate’s supervising these key crossroads.

Under its Roman successors, the port faced a challenge to survive the pull from the Italian peninsula. “For as the Roman Empire groaned and cracked under the strain of it buckling frontiers and internal divisions the fault lines seemed always to converge on the city of the Bosporus.” Its situation, straddling Asia and Europe, facing the vast Black Sea but guarding a channel into the even more massive Mediterranean, shifted its attention to the East as well as the collapsing West. Both regions faced the replacement of their pagan gods by Christ, and so Constantinople rose, ushering in the Byzantine polity, taking on the legacy of the Roman imperial sway, attempting to expand it by faith.

This New Rome loomed large over this medieval duration. Sacked by Crusaders, with the dubious assistance of speculators and settlers from the Italian ports, the city endured the machinations of its rulers. These can often blur for those uncertain of Byzantine dynasties, but Madden keeps the story lively, with anecdotes drawn from those chronicling the rulers from the inside gossip as well as diplomatic records. With such as Procopius and Nicetas Choniates as sources, the account enlivens.

The year 1453’s dramatic capitulation of the last citadel of Byzantium to the forces of Mehmed II has been told ever since it happened by awed bards. This retelling ends the second section, as Istanbul emerges. Under Suleiman the Magnificent, while the city became Muslim, Madden’s phrase of it as “Ottoman Constantinople” confirms the continuity within its walls as it was rebuilt in majesty just as before.

The Ottomans briskly march and manipulate their long reign over a formidable congeries of subjects. Their empire, skillfully or maladroitly managed by a cadre schooled in the intricacies of bureaucracy, attests to the difficulties of pleasing sultans, a soldier class of warring factions, and millions more. Madden packs a considerable amount into relatively few pages, but this summation can be supplemented by his generous list of further reading; his end-notes citing observers of it all tally few.

In the small fourth part, at least audiences get a sense of the brevity of the current administration. The city’s Greek nickname “in/to the city” preceded the somewhat-secular Republic’s incorporation by a thousand years. Kemal Ataturk’s adaption of it signals a decision to move forward, and to leave behind the legacy of the discredited (at least under his term) caliphate. The city grew beyond not only its walls, but also its banks as in-migration continues to expand the megapolis. This sprawl exceeds 15 million, the fifth largest urban conglomeration in the world. A full 60% of it occupies “built in one night” dwellings amid towering apartments. Neither grace the charm of what has preceded them surely.

The nation’s current predicaments gain appropriate mention. For as Madden concludes, Recip Tayyip Erdogan, while he has moved from the city’s mayor to the nation’s president in 2014, stands for the working-class, conservative district of Istanbul where he was raised. The tensions between the loyalties to his upbringing and those of the Kemalist ideology it confronts raise questions as to the continuity of the latest legacy to contend for the allegiance of this city, always at a crucial crossroads.