The Four Horsemen: The Conversation That Sparked an Atheist Revolution 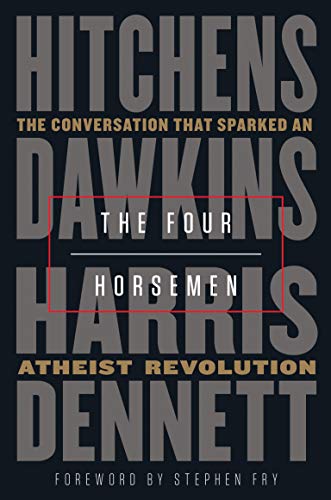 “What remains not unsaid but unresolved is the team’s final question: Is religion potentially, latently, or equally dangerous?”

A chat over cocktails a dozen years ago turns into a book. Not the usual transfer from one medium to another, but given the audience that the YouTube video of these two hours has generated, this transcript will prove a helpful companion to the wide-ranging exchange engaged in by the late Christopher Hitchens, Richard Hawkins, Sam Harris, and Daniel Dennett. The non-alphabetical listing of the four interlocutors may attest to the publisher’s estimate of which one’s most famous. But the other three hold their own alongside a formidable and witty “Hitch.”

The Four Horsemen: The Conversation that Sparked an Atheist Revolution gains in print an introduction by another fierce proponent of reason, the comedian-actor-author Stephen Fry. He begins with predictable attacks on religious fakery and the necessity for logic and fact. Dawkins follows with a preface, glibly and confidently phrased, and at times snippy. One presumes after hundreds of opportunities to proclaim his rationalism, the Oxford professor has his spiel honed down smoothly.

However, in his facile dismissal of the Catholic state of purgatory, Dawkins, quoting the online version of The Catholic Encyclopedia, neglects to mention this is from 1911. The interpretation of this liminal state has evolved since then. He detests religious hubris and exalts scientific investigation. He finds the former endeavor has contributed “literally zero” to humanity’s storehouse of knowledge.

This may be epistemologically defensible, but more finesse might have set down this assertion more firmly. Dawkins’ determination in the preface to “develop new points” wavers, and whatever fresh insights he has made since the week after Thanksgiving in 2007 sputter away into scattered potshots and familiar jibes that will surprise neither friend nor foe. The same can be said for the transcript.

Fellow scientist Dennett, given a few words at the start to catch up since their live meeting, proves more amenable to recognition of the need to “preserve the good that religions can do.” Harris, having since the talk secured a prize perch also in the ranks of academia, archly opines that if a cure for the Zika virus is found in labs, presumably billions of God’s faithful across the globe will thank Him for it.

Harris starts off the meeting admitting that “people can have self-transcending experiences.” These deserve to be described in a dignified manner, rather than being trashed. Dennett concurs that we may make room for the “numinous” without God; Hitchens rouses the opposition’s battle cry. Those against belief “don’t belong to the spiritual and are not to be conscripted or annexed by any priesthood.” This spirited riposte, given the vagaries of learned musings here, drifts. Pages fill with segues into the arcane, an occupational hazard of the four.

Theologians get propped up as straw men, while the horsemen aim at their enemy’s weakness: Are these doctors of divinity the real literal readers of scripture, rather than the derided fundamentalists? This quartet of professorially trained pundits insists that they do not “blow up their fellow citizens on the London Underground.” They test and verify and seek proof while allowing for a process that includes “a tremendous amount of uncertainty,” at least until a unified theory of everything and a concrete explanation for consciousness are discovered. Hitchens’ acceptance of examining hard evidence among those trained in analysis more than exegesis elevates this panel, along with the scientific cadre, over believers “who claim to know more than they can possibly know.”

So go the arguments of these Four Horsemen. Dennett adds that the religious cohort must exclude themselves from the debate, for they have declared themselves as believers in the ethereal and the intangible as “incompetent to proceed with an open mind.” Hitchens grudgingly admits, all the same, deep into the discussion, that at least pre-monotheism “does, or can help people to avoid hubris, I think, morally and intellectually.” After a pause, part two commences.

Dawkins, Dennett, Harris, and Hitchens grapple with “cognitive dissonance” among their educated peers. How, Dennett wonders, can scientists trained in their pursuit and holding eminent positions at universities and corporations compartmentalize their worldview? A great topic, one that for better or worse given the vagaries of four smart men (Ayaan Hirsi Ali had to cancel due to parliamentary matters back in Holland) wanders off, as unrelenting dissection of heavy matters may tempt even the most acclaimed of skeptics to share anecdotes and enjoy facile or fantastic musings about our foibles. The four have some fun.

Witchcraft, Reagan’s astrologer, Ayaan Hirsi Ali’s fight against anti-feminism in her native Somalia and her adopted Dutch home, aesthetic comfort, Michelangelo, John Donne, and “Osama bin Ladin’s favorite philosopher” Sayyid Qutb, founder of the influential Muslim Brotherhood—all earn their moment as feted or falsified at this climactic keynote presentation before Atheist Alliance International in the nation’s capital, Washington, D.C. Four nimble and erudite speakers finally reach common affirmation, if with differing degrees of enthusiasm: the Bible possesses cultural value, as does sacred architecture and art, and for Hitchens, even coyly saying grace (a great anecdote from an Oxford predecessor enlivens why).

What remains not unsaid but unresolved is the team’s final question: Is religion potentially, latently, or equally dangerous? And another: Why did not the noted wit Stephen Fry pun on the meaning of the Four Horsemen, from the book of Revelation? He seems oddly content with riffing only on the Three Musketeers.