Why Meditate: Working with Thoughts and Emotions 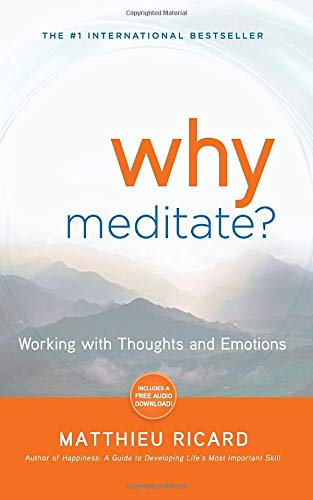 Fluently translated by Sherab Chödzin Kohn from the 2008 French original, this primer introduces meditation to the non-Buddhist. Grounded in Buddhist philosophy, however, and seasoned with Tibetan advice, Mr. Ricard, as a monk in Nepal, speaks from over four decades of experience to relate ancient teachings to Western readers. Gracefully and clearly, Mr. Ricard displays the benefits of a meditation that keeps a realistic, even tough-minded, approach that faces reality and stares down pain.

Lucidity opens his survey. The meditator seeks the fundamental clarity of the original purity which persists beneath a conceptual haze that swirls within the spirit distracted by life’s passing concerns and the mind’s deluded grasp of what proves fleeting, whether born out of pleasure or anguish. This Buddhist conception represents in its root Sanskrit meaning “cultivation” of the harmony that every human may achieve, with focused attention gained by daily meditation and expressed by loving-kindness to all beings.

Commitment to practice makes a successful meditator. One cannot only look at a menu if one needs nourishment: one must taste the fare. One cannot learn a Mozart sonata by tinkling the ivories a few seconds each day. Mr. Ricard urges the reader to discover the deeper, calmer reality beneath the pressures and temptations of mundane activities. The “monkey mind” cannot be tamed by tying down a restless beast; the liberation will come only when a chance for release happens, when the monkey momentarily finds a calm respite from its own frenzy. Meditation works its remedies for inherent suffering when the time is taken to seek peace, which enables the mind to contemplate itself and the body to balance itself.

He leads the novice into how to sit, how to concentrate, and how to handle distractions. His commonsensical suggestions, interspersed with the pithy poems and reflections of lamas, enrich this presentation. He also reminds us of his own French training in science before he became a Himalayan monk, citing Edwin Schrödinger on the reality of the present moment as “the only thing that has no end.” Footnotes to medical studies on the advantages of meditation add to the usefulness of this guide for the newcomer, as well as perhaps further persuasion for secular skeptics in the audience.

Buddhism and physics agree: now is the only time in which we live, ungraspable and forever changing, as humans watch life passing and unfolding. The necessity to transform one’s circumstances, to take advantage of the fragile and transient lifespan given for liberation from the ego’s folly, for cultivation of one’s altruism, remains the foremost goal of one who seeks enlightenment. One must act upon wisdom learned in insights and calmness of disciplined, but heartfelt and compassionate, meditation undertaken seriously.

Mindfulness, despite perhaps becoming a buzzword or cliché in Western pop culture, at its moral core brings one more into the world, rather than apart from it. Mr. Ricard explains the healthy mind and body that can result from steady meditation done daily. He also emphasizes the practice of exchange—of trading another’s pain for one’s own pleasure—that profoundly exhibits the promise taken on by committed Buddhists. While his explanation subtly conveys this “bodhissatva vow” rather than explicitly naming it, the noble intention stays the same. The meditator leaves behind the attachment to ego and embraces a compassionate offering of one’s self, freed from egotism, to ease the pain of other beings.

One faces “afflictive emotions” of anger, desire, and anxiety unflinchingly. In their place, the practitioner becomes kind-hearted, braver, and more daring. Rather than shutting off the meditator from society, Mr. Ricard notes how meditation enhances ethical action and communal support. As the sympathy for others in pain grows, the meditator, rather than being detached or reclusive, devotes attention to easing those who suffer.

Beneath this activity harnessed to help others, the meditator learns the connection that transcends the ego’s passing fancies. Mr. Ricard devotes many pages in this short book to pain in its mental and physical manifestations, and how meditation can prepare one to confront it with courage and steadiness. Underneath the surface, despite the sufferings that fill one’s days and haunt one’s nights, Mr. Ricard cites one guru who assures that “the clouds do not change the nature of the sky.” That is, transient joys and sorrows pass over the fundamental presence of a deeper existence, rooted in a fresh, vibrant, original nature, waiting to be discovered and nurtured by the meditator willing to make the commitment.