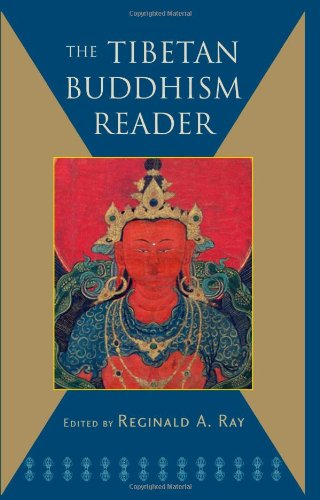 This anthology compiles sayings of over two dozen lamas, past and present. Following the naturally emerging path into Buddhist practice, Reginald A. Ray arranges the contents: “what the path feels like, how meditation unfolds in our lives, the particular problems and obstacles that arise for practitioners, the way to be genuinely helpful to others, and how the vividness and clarity of realization begin to dawn within our awareness.”

Oriented for users rather than scholars, this provides a compact collection that may also inspire contemplation, and putting the fruits of such recollection into action.

Seven chapters model the upward process toward the Himalayas of spiritual accomplishment within the “Vajrayana” diamond-sharp methods of Tibetan teaching. Terminology is glossed (if sometimes too tersely for a newcomer) in an appendix, along with the sources for each excerpt and brief biographies of the gurus themselves. Emphasis remains on the pithy comments themselves, which challenge the learner to enter loneliness as the hard-won way towards wisdom. Others become touched by the learner’s own struggle as self-knowledge humbles one towards compassionate outreach.

As Patrul Rinpoche urges in the first chapter, “Foundations,” the practitioner must “cultivate disenchantment with it all.” Death and impermanence goad the seeker. In the second chapter, on the path, The Dzogchen Pönlop Rinpoche puts this into terms today’s reader can understand. A theistic, mundane interpretation of religion treats us as powerless; the programmer’s an “external being or external energy” that holds the keyboard and does the programming for us.

For Buddhism, we program, we control the keys, we “press the command keys,” so “we get what we want on the screen.” These commands constitute the dharma teachings given by the historical Buddha. Buddhism being non-theistic, one’s own skill and one’s input energizes it.

Meditation, in the third chapter, resists easy incorporation into one’s practice, despite stereotypes of blissful lotus-posed devotees. True meditation demands discipline; veterans of this regimen warn of familiar seductions that trap even the advanced advocate. “The most subtle and the most difficult” obstacle, Tulku Urgyen Rinpoche warns, persists as “the demon of seduction,” the voice that puts off meditation or “practice” due to the pressure of work, the commitments surrounding us, the idea that “next month or next year” will give us finally the time we need to settle down.

The Buddha compared this struggle to that of a dog vs. a lion. Distracted, a meditator will pursue each stray thought as a dog chases a stick, retrieving it over and over. If you throw a stick at the dog, he keeps bringing it back to you. But if you toss a stick at a lion, the lion hunts you down. Your first throw will be your last. While the dog scatters his energy in repetitious activity, the lion gets to the source of the disturbance, and settles it once and for all. A lion-like surety, an ability to rest on the surface of thoughts as one encounters “empty awareness,” as with thoughts that ripple a lake but do not disturb the depths, becomes the desired state for the calmed meditator.

Compassion in the next section emerges from meditation. Foremost among dharma teachings, this represents the “awakened heart” that the Buddha possessed and reminded his followers that they too possess, beneath the ripples within the depths. The present Dalai Lama speaks of no need for temples or “complicated philosophy,” for one’s own brain and one’s own heart make a temple of kindness. This leads to enlightenment: a challenging exchange of one’s own happiness to relieve the suffering of other beings. Compassion signifies inner strength; this bargain for Buddhahood combines peacefulness with power, courage along with generosity.

Eventually, emptiness represents a higher meaning for the skilled practitioner. The lack of lasting substance within any “real” being or thing, Buddhism argues, upends reality itself. One lama quotes: “In the moment of love, the nature of emptiness dawns nakedly.”

This insight can unsettle. Training requires the meditator to break through an intellectual understanding into a direct experience of this knowledge. Concepts dissolve, and awakening presents the adherent with a farewell to illusions and dreams, especially waking ones.

The “mind of the Buddhas,” as chapter six, stresses the inherent nature of this awakening. This naked awareness of mental insubstantiality and physical limitations, Tulku Urgyen explains, resembles a customer at a buffet. If one only looks at what’s displayed, one stays hungry. Being told about Buddha-nature without bringing it into one’s self leaves one unsatisfied, and empty.

Finally, realization of this awareness permeates the practitioner. As with the sky, the eternal presence persists of the awakened mind, no matter the turbulence of passing phenomena, the clouds obscuring the blue vista. Nirvana exists within the mind’s own coming to be. This may sound paradoxical. But those lamas whose lifetimes of training are distilled into the paragraphs and verses that Ray includes argue that this understanding compresses into intuitive truth. A “natural clarity of mind” pierces the cloud cover.
Dilgo Khyentse Rinpoche tests the validity of one who claims to have succeeded at meditation and practice. Within ordinary life, the practitioner keeps steady, freed from distractions. Wisdom persists as recognizable, and this persistence proves the lesson for those yearning for spiritual instruction. “Constant awareness” transcends the sitting session, the formal practice period. For Buddhists, this liberated state does not wait until the afterlife to descend.

Ray presents these complicated teachings in accessible, brief entries. Meditators may wish to consult one or two as examples for daily reflection. Students of Buddhism may find here an easier way to figure out what more specialized texts present in technical language as to Tibetan teachings.

Affordable, and by its organization a book that keeps the teachings themselves front and center on each page, this simple collection of what the lamas profoundly share offers those in the West eager to investigate the legacy of Tibetan traditions a recommended resource.