Time Song: Journeys in Search of a Submerged Land 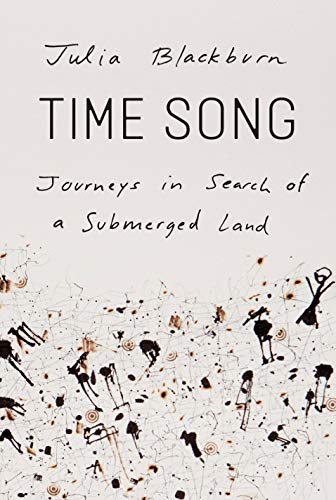 “The ruminations and peregrinations gathered up into this contemplative collection should motivate her readers to seek out her past forays into other forgotten corners of the earth, which rise and resist the sea and the shattering of time and space.”

Beneath the North Sea lies Doggerland. This fertile plain of forests, submerged since about 7000 years ago, disappeared as the oceans rose after the Ice Age. When trawlers dredged up mammoth bones, and fossils far older, at the start of the last century, few took notice until the archeologist Bryony Cole dubbed the region thus, just before the millennium. This terrain begs for dramatic interpretation and exploration.

Time Song as the title portends tries to enliven this potentially fascinating subject, as Julia Blackburn ties its desolate seascape once landscape to her own history of more recent loss. The name of the land comes from a link to a Danish word for “dagger.” Out of dogwood, spears were crafted by peoples in the Middle Stone Age, to make fish traps.

Under the water lies potential for exploration and imagination, as Blackburn plumbs.

She talks to those similarly inspired. Not only professors, but scavengers, who hunt the traces of the hidden maritime wonderland for hints of how the British ancestors lived. While readers of Seamus Heaney will be already familiar with his poetic evocation of Tollund Man and related “bog people” immured in such turgid burials, with their mortal fates open to speculation and imagination, Blackburn tells readers of her own encounter.

She recalls her late husband, for whom this book provides a posthumous tribute. She asks the questions about mortality and fate that trouble any inquirer, and she compares the death of whatever Doggerland meant for its inhabitants to the present-day predicament for islanders like herself facing another global warming and its doom.

The best parts of her encounters come when she introduces readers to those who lovingly curate their finds from Doggerland. Blackburn in her nonfiction travelogues as well as her inventive historical novels has a knack for the curious and the unexpected. This suits her subject well, and those who have enjoyed her previous books will find the same qualities of tale-telling, fact-rummaging, and personal rumination in Time Song.

All the same, the results here fall short of what could have been a definitive account. Maps document the surfaces now reconstructed by scholars. But no photographs enhance the narrative. Her chapters about earth-bound data recall those of, say, John McPhee in their attention to detail. But Blackburn's personal story, integrated into the factual accumulation, does not blend into the mix as smoothly as a well-crafted artifact might strive to sustain for aesthetic harmony.

Perhaps this results from the jagged harm caused by the loss of her spouse, and that Blackburn resists integrating a pleasant texture that overcomes resistance to the whole depiction of what has vanished from sight. But her anecdotes sometimes fail to power the storyline, and they weigh it down.

Blackburn may suspect this. Her poems alternate with the longer prose sections. Spare, splotched drawings by Enrique Brinkmann look like inkblots arranged carefully on paper. These may mean to repeat the remnants of activity, the failed attempts at energy, the scattered tries at permanence that speckle the human record of art and endeavor.

Therefore, Time Song adds up to an uneven, thick in places and sparse in others, arranged assemblage of sentences and fragments, and stoic, mannered art to match the broken efforts to recover lost lives and to commemorate present difficulties at giving voice or impression to fleeting emotions. Blackburn remains an attentive and skillful guide to unexpected places, here no less than her impressive oeuvre over many decades. The ruminations and peregrinations gathered up into this contemplative collection should motivate her readers to seek out her past forays into other forgotten corners of the earth, which rise and resist the sea and the shattering of time and space.