Death, American Style: A Cultural History of Dying in America 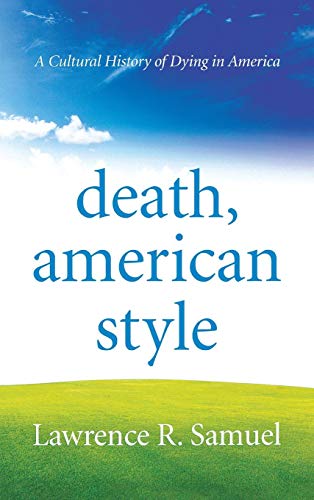 “Dr. Samuel comprehends our current, eternal difficulty with our common fate, unimaginable for many of us, always inevitable.”

We lack an ability to cope with death.

As ten thousand baby boomers will daily turn 65 for the next 19 years, Lawrence R. Samuel warns of the “social crisis” Americans face unless they come to terms with mortality.

In this cultural history from the 1920s to the present, he compresses summations and paraphrases and many quotes from a variety of primary sources. Gleaning data from magazines, movies, government and medical reports, and popular culture, Dr. Samuel compiles how Americans have resisted a confrontation with death.

While the 19th century found many Americans still familiar with death as people often passed away at home or at work and were waked and buried by the family, this cyclical understanding of how the dead returned to the earth faded as urbanization and capitalism combined to encourage the death industry.

Progress urged Americans to look forward as a linear orientation replaced the cyclical model. This led to what Dr. Samuel laments as he begins Death, American Style: “We are surprised when it takes place, an ironic thing given it is the only certainty in life. Like our national debt, perhaps, we have borrowed against the moment, making our dying that much more difficult when it does come due.”

Trying to enhance our lives by ignoring death, we lose the rich appreciation of life gained by an honest assessment of its fragile duration.

In 1929, Bertrand Russell classified human reactions to death three ways. People ignore it, they obsess over it, or they assert a religious belief in a superior hereafter. The problem remains. Belief persists as a mostly “conscious mechanism” while “fear of death resided in the much deeper unconscious.”

Dr. Samuel often quotes Freudians; repression appears to dominate the academic explanation popularized for many Americans during the past century. While this aspect subsists as more contextual than as examined (often, the reliance on rephrasing sources as the author’s own words occludes what the author adds to shape or interpret his digest of diverse sources from his wide research), it fits into the detachment Americans after WWI began to adapt as they drifted away from encounters with death firsthand.

Undertakers became morticians; coffins transformed into caskets. Mortuary science replaced the family who interred a loved one in their local graveyard. Stress during the Depression, Dr. Samuel observes, weakened many generations; death often accompanied or hastened hard times. With WWII, “violent death” returned, inescapable in headlines and on broadcasts. Families received a dreaded two-star telegram: “The War Department regrets to inform you . . .”

However, as Lawrence Samuel sifts through the responses of insurance companies, widows, grieving parents, curious children, and dogged Freudians, he demonstrates life’s persistence. Between 1942 and 1945, for every battle death twelve births occurred, an increase of 30 percent in fecundity. The facts of life dominated; mourners found themselves marginalized. Death’s segregation in the post-war years showed a “social pressure to quickly move on from the unfortunate experience.”

Optimism reigned. In 1958, Dr. Joseph Still argued—as many of his colleagues specializing in the “disease of aging”—against death’s inevitability. Dr. Samuel acknowledges the difficulty of defeating such “circular logic:” as Dr. Still insisted: “The only factor which prevents our living forever is death.”

In a secularizing and rational mindset, positive thinking’s power directed medical training: “a cured patient represented success while a dying patient signaled failure, a strange point of view given the inevitability and normalcy of death.”

Contrarily, a subsection titled “Death Watch” documents in unsettling fashion the routines by which a city or county hospital’s harried staff hastened (one wonders if the past tense is all that is needed) the demise of patients judged near their end. As technology improved, the rush for organ transplants accelerated the demand for a postmortem grab of coveted body parts from many of these admitted one final time.

By the 1970s, social and scientific tensions worsened. The longer people could be kept alive, the greater the anxiety became for both staff and loved ones charged with making tough decisions. Individualism weakened the comforts many Americans once cherished about the immortality of the soul, and progress brought threats of environmental degradation and technocratic dominance.

Life and death, thanatologists argued, might not be a continuum; death-with-dignity and a right-to-die became catch phrases. So did Elisabeth Kubler-Ross’ “five stages of dying” and the plight of Karen Ann Quinlan, trapped within the competing decisions of the law, medical machinery, and her family’s wishes.

Demographics began to shift, and boomer families grappled with how to care for their children and their parents at the same time. Lawrence Samuel reminds us how insurance companies long have taken advantage of a child’s birth to initiate a sale of a policy.

The emotional and financial tensions stoked by the competing demands of parenting and dealing with parents reduced often by medical advances to childlike regression complicate the situation for millions who must work and raise families on both sides of middle age, far greater than ever before.

AIDS, “conscious dying” advocates, the battle over “death education” in schools, “living wills, and hospices speckle the chronicle of the 1980s and 1990s. The Me Generation acted the same way about death as it had about sex: as if nobody had discovered either one before.

Dr. Samuel comprehends our current, eternal difficulty with our common fate, unimaginable for many of us, always inevitable.

While today’s “radical life-extension” promoters peddle another version of miracle cures, the majority less able to afford such nostrums must get over any expectation of special treatment, Dr. Samuel concludes.

No longer avoided by the “eternally young,” he sketches (yet frustratingly, he leaves all but blank this last storyboard) a dire fate for American society if it continues to deny death’s arrival.