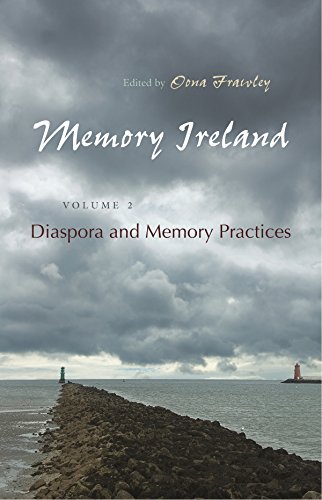 “. . . this collection will intrigue audiences seeking a serious study of Irishness in popular culture—more serious than the blarney and blather constituting much of what passes for Irishness in culture.”

How do emigrants remember the old sod? Do an immigrant’s sons and daughters commemorate their ancestral, often distant, homeland? Can such a place endure as home within a diaspora?

Within the motherland, how do natives transform what was left behind? Both those overseas and those at home perpetuate “memory practices” through souvenirs, stories, song, and celebrations.

Images on walls as pictures or photos commemorate traditions and concoct new trinkets, kitsch, and art. These make up the material for the professors and poets who contribute here.

In my NYJB review of this series’ predecessor, I explained: “This first of four volumes explores the replacement of chronological historiography with a more fluid, less rigid approach that investigates what is remembered from the Irish past.”

Aimed at the Irish Studies and historiographical fields, alternating between theoretical concerns and accessible examples, this collection will intrigue audiences seeking a serious study of Irishness in popular culture—more serious than the blarney and blather constituting much of what passes for Irishness in culture.

Nostalgia, author Frawley observes, “has fed into the construction of the cultural memory that Ireland embodies at home as well” as abroad. Until the independence of most of the island, Ireland hid many national ideas through symbolic representation. Therefore, memories themselves “spoke” in acts, words, and emblems.

Aidan Arrowsmith looks at British-Irish writing as “postmemory” and finds many romantic cliches.

Chad Habel relates from Irish-Australian novels of ancestral memory more trauma, perhaps due to such immense distance, to separate from the homeland as well as a desire among some to recover relationships and attachments from dormancy and attenuation.

Katrin Urschel peers into Irish-Canadian “physical manifestations” of the homeland within the vast, multicultural dominion.

From America, James P. Byrne challenges the usual derivation of nostalgia as “homecoming” + “pain.” He locates a revisionist nostalgia advancing political and cultural power for emigrants.

While Ms. Frawley appears to overstate as “mostly unaddressed” the problem of race in Irish contexts as if able to be confronted or depicted more outside the island, Maureen Reddy uses Jim Sheridan’s film In America and Roddy Doyle’s novel Oh, Play That Thing and story “Home to Harlem” as case studies that expand the attention given by current Irish Studies scholars to “race-inflected” accounts.

Spurgeon Thompson’s “The Kitsch of the Dispossessed” excavates as “signifiers” artifacts of “cultural loss” from Irish America alongside Patrick McCabe’s and Neil Jordan’s versions of The Butcher Boy.

Other objects, as jewelry, souvenirs, and tattoos, Maggie Williams shows, emerge as “icons of Irishness.” The great fairs in the 1890s and 1900s in Chicago and St. Louis featured simplified “Irish villages, and such visual displays of a less complex “recent past” endured in the recollections of visitors, along with mementos. Jewelry temporarily and tattoos indelibly show an identification—to the public or to intimates—as “signs of membership in a constructed ethnic and cultural community.”

For the eminent Irish-language poet Nuala Ní Dhomhnaill, her shift from childhood among immigrants to Lancashire dramatically changed when she was “fostered out” to her Gaelic-speaking aunt’s family in West Kerry. Ní Dhomhnaill feels as if, when she returns to England as an adult, a “doppelganger” hovers, “the person I would have been if I stayed.”

Joop Leerssen opens part two. He studies as “internal memory transfer” the gap as the Irish language receded in the 19th century and a historic cultural break found partial repair—as with James Joyce’s Dublin reconstruction in Ulysses— through determined active and archival intervention. Of course, Joyce used music as one keen method to evoke memory, and Katie Brown tackles his mid-nineteenth century predecessors, who blended a nationalistic mix of static and dynamic shifts of modes and lyrics which filled Ireland’s linguistic breach.

The “eviction photograph” codes a powerfully charged image into this history, as Gail Baylis scrutinizes their arranged depictions of peasant expulsion by landlords and their agents. In the 1890s, one series of “protracted evictions” was exploited for publicity by the Land League for foreign journalists, English politicians, and “radical sympathizers.” Baylis compares historical with recent appearances, in the press and on genealogical sites, of “visual coding” from such charged images.

Related images resist the “outsider” condition given to Travellers, opposed to what Mícheál Ó hAodha surveys as its emerging “rearticulations” from within its community to the “anthropological canon.”

Sara Brady’s analysis of Gaelic sports looks at games in Ireland and overseas as a primary marker “to stage identity, ethnicity, and place.”

Hasia Diner sums up the Irish portion of her book on “foodways in the age of migration” a century and more ago—the Famine may have contributed as well as the dependence on the potato to “disassociation of food from identity, family, and community” but the Irish predilection for alcohol fueled much of their social life—and anti-British subversion as such beverages eluded taxation, so the rationalization developed— no matter where the bonding transpired.

Cooking at the “traditional Irish cottage” proliferates as a commemorative subject. Rhonda Richman Kenneally seeks to redress the emphasis on the hearth and not the housewife. Cookbooks reveal the incorporation of international and modernizing influences into the island’s “gastronomic heritage” as defined and delineated by three cooks’ narratives from the past 70 years.

Paul Muldoon, in typically allusive prose segments, starts with rum and Treasure Island and after forays into matters piratical and puritanical regarding that demon drink and other brands, and skirting the Troubles of his native turf, ends with a confrontation, suppressed in part as in many Irish families, with the coded mention in Robert Louis Stevenson, of alcoholism. With this memory, so frequent in histories recorded or erased by the Irish over the sea or back on the island, this collection closes.

Ms. Frawley—a New Yorker teaching at an Irish university—alludes to the position of not only the caricatured American tourist looking for his or her roots, but the Irish who are tourists in their own country.

When Irishness is globalized, what does this do to caricature the natives? Perhaps the third or fourth volume will include an essay on franchised Irish bars with mass-produced “old-fashioned” decor, this unforgettably marketed “kitsch of the dispossessed” as icons of the diaspora and beyond.