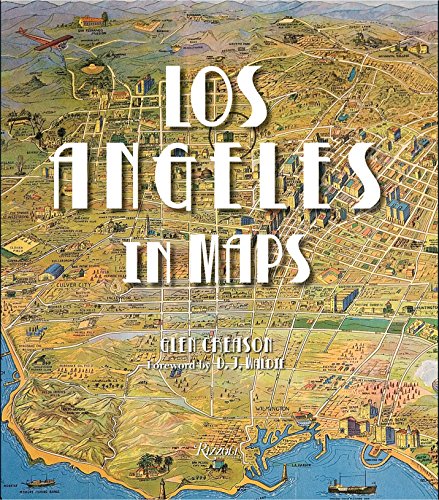 This large format book is no coffee table artifact. A lively text by the Los Angeles Public Library’s map archivist, Glen Creason, along with an introduction by fellow native D. J. Waldie, with contributions by Dydia DeLyser, Joe Linton, William J. Warren, and Morgan P. Yates, attests to the diligence with which this compendium, one in a handsome series by Rizzoli, documents how cartography sold the world a vision of sunny L.A. Artistic maps, lavishly and perhaps misleadingly illustrated, spurred millions to dream about—and often move to—the sprawling City of the Angels.

The earliest charts show a few settlements scattered in blank spaces, a Spanish rancho, or a few hills the total of what can be filled in such terrain. The true natives, soon erased, rarely gain representation; Jo Mora’s exuberant 1940s maps celebrated the Indian-Mexican-Early Californian romance that sold more lots in dusty chaparral than perhaps even tickets to movies and festivals that also mythologized such scenes. Admittedly, Mora’s playful, vivid, and lovingly detailed maps exemplify the boosterism, blending data with dreams, that typifies many of these entries as land grant and sober surveying needs surrendered to Hollywood promotion.

Along with the would-be starlets and charlatans, everyday folks disembarked to spur L.A. into a boomtown along the rail routes that the robber barons laid out. Water lines, transportation, and utilities imprint their own overlays, as the remote ranchos turn into subdivisions named after the natural features and early outposts they obliterated. Pragmatism rather than beauty, Creason comments, impelled the patterns of the city, as highways and then freeways followed the rivers, rails, and pioneer trails to track the 20th century’s explosive growth.

Colorful charts often enliven what might have been in other cities a drearier duty of detail. Somehow, even a reservoir or a housing tract looks cheerier with an exotic street name or meandering lane around canyons and parks. This imaginative imprint upon abundant land characterizes the inventive necessity that drove the planners and speculators who led the rush to bulldoze the vistas they admired. This temptation to get rich quick invited the first settlers, pursuing a commodity not of gold but space. Real estate, the nearer the coast or the higher up the hill the better, continued to increase in value as oil supplanted agriculture. The movies inspired greedy arrivals to sell more lots to more migrants who came to the terminus of the Southern Pacific Railroad and the palm-fringed edge of the continent.

Such depictions speckle the margins of more than one map. “Literary Los Angeles” and another map of the Library’s branches prove that not only Hollywood lured and sustained audiences. “Roads to Romance,” maps to the stars’ homes, Arnold Schoenberg’s modernist impact, Auto Club tourist guides—all appear. This last map features routes to such early 20th century attractions as the Cawston Ostrich Farm. That roadside attraction entertained crowds a few feet from the world’s first freeway. The Ostrich Farm was a few miles from where I type this. Long-abandoned, its site now a dull if functional work-live loft, its fate testifies to the pace of municipal change.

The population expansion, as movies exported L.A. as a global legend, accounts for recent maps of the dully titled L.A. Basin. Until the rise of the GPS navigator, as Creason observes, many Angelenos carried a Thomas Brothers Guide in their automobile. Half-memorizing its numbered pages, this grid became the local version of the A–Z London map. I doubt if anyone in this city, native or transplant, carries “The Knowledge” of its streets such as what London’s black cabbies do in their memories. Maps need revision. In a Southern California labyrinth, unlike a settled city such as the heart of The City, each year pushes more tracts deeper into the Basin.

Reviewing a galley of this work as a PDF file, I am unsure about the resolution of some maps at this degree street level. The Adobe Acrobat Reader that I welcomed as a boon to increase detail in fact lacks precise calibration to avoid pixilation of the details. I presume the large-format book form will afford the naked eye easier ways to investigate the intricate elements of these maps. I spot-checked many maps by testing them on my own neighborhood, just northeast of downtown, but the resolution failed to enlarge them into a more readable clarification.

I have seen some of these maps on display at the Los Angeles Public Library. My eye, close to those sheets, managed to make out better detail than the power of the PDF file’s less exact settings. Magnifying glasses may assist the reader, therefore, of this work in published form. However, the reduction of large charts and foldout sheets to a book that fits on the coffee table, let alone a shelf, may mean that some maps are meant more as impressions to be enjoyed—rather than scoured like my tattered Thomas Brothers Guide on the passenger seat.

At that bird’s-eye level, then, this book succeeds, for many maps panoramically aim at the eye of wonder rather than the commuter of habit. The maps show, over many decades, how the area turned on paper less fanciful and more functional. Their colors fade over the decades.

Many examples demonstrate this evolution of L.A. neighborhoods from fabled theme park to another freeway offramp. For instance, see the entry about “Barnes City.” Al G. Barnes kept his four thousand animals off season on land not far from the Pacific. In the late 1920s, he sought to cash in. His map announces “Barnes City:” “Now Subdividing This Tract—My Former Winter Quarters.” The neighbors, as if actors from the nearby studios in a silent comedy cum real-life plot, feared takeover by a “simian cognomen” of “Monkeytown” voters. Barnes never realized his own boom. The area has been long subsumed into the placid, modest community of Mar Vista, even if the “sea” is hard to “see” from nearly all of its location. Such tales accompany many entries here, if in less grandstanding manner.

No orange groves remain from my childhood on the outskirts of L.A. County. Neither do simian quarters nor ostrich farms. The later maps fill with detail, but of the thirty off-ramps between a seeker of the surf, an implied hint of the traffic in between, and the vision of that beach itself.

Los Angeles, as these maps show, sold itself so well that the maps turn poignant testimony to the loss of what they celebrated.