Gothic Histories: The Taste for Terror, 1764 to the Present 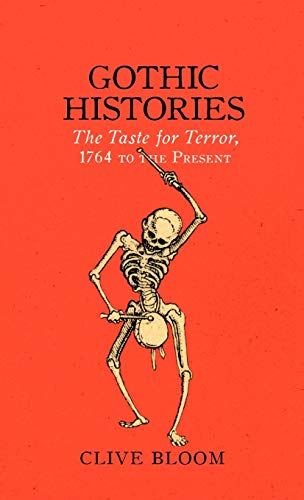 Drawn to the hallucinatory, enchanted by the morbid, the gothic sensibility mixes incarceration with necromancy, technology with architecture, vampires with séances. The bizarre and wild, Professor Bloom explains in this spirited survey, emerged with the European fear of modernity. Beginning with Horace Walpole’s The Castle of Otranto in 1764, authors disturbed by the loss of control presented by democracy, rebellion, and technology reacted by reviving antiquarian settings, scientific subversion, and macabre predicaments.

This introduction moves rapidly through the 250 years of this genre. English and German writers sparked the movement. Female sensibilities imbued early British stories, while Teutonic terror tended toward brooding Byronic anti-heroes, the occult, the metaphysical, and the irrational. “Gothic horror,” Bloom elaborates, “is about that which should not be.” Its characters face the abyss and the end of sanity. Their moment of awful recognition allows the spectator to enjoy a frisson of annihilation while the distance between action and witness toys with the safety of the viewer. A reader glimpses the “otherness of cosmic indifference” which lies at the core of the gothic encounter.

The Romantic era rushed into emotional, despairing, destructive tendencies that revolution and industrialization hastened. In Frankenstein, the “monster’s self-questioning is the first real expression during the nineteenth century of the existential crisis of those who felt they were abandoned by God and who sought revenge for this abandonment.” Mary Shelley’s story roams a ruined landscape, articulating the bewilderment of the stranger, wandering where salvation eludes those who never asked to be created. Her predecessors toyed with humanist progress as an answer, but Shelley and later gothic authors began to stand for refusal. Denial of transcendence and a rejection of liberation darkened tales.

The French Revolution tinted this gothic tone. Social collapse, feared by the aristocracy, gave way to psychic decay. Penetration and violation flooded the vulnerable self. The body turned into a prison. Tales told “the language of ruin.” Bloom defines this mode: “Gothic is the map of a border, a mapping of the edge always illuminated by the shadow of night and the rays of the moon.” The gothic forays into that unknown territory within the self, he adds, predicted what psychoanalysis would later confirm. Instead of goodness and creativity, violent will and self-destructive tendencies lurked.

By the middle of the nineteenth century, however, these themes turned clichés. Thomas Love Peacock and Jane Austen satirized sinister storylines soon after Shelley’s success. Poe, Dickens, the Bronte sisters sketched upon the templates of such imaginative novels as Charles Maturin’s nihilistic Melmoth. Both wordsmiths and hacks—encouraged by a demand among the newly literate for pulp fiction and melodramatic theater—broadened gothic conventions into detective novels, romances, thrillers, and mysteries. Such remain the patterns for today’s diverse and gloomy entertainments. Theosophy, mesmerism, spiritualism, Marxism, and the rise of soulless corporations that live on forever: these Victorian innovations also furthered in surprising ways the cultural and ideological rule of the gothic.

Although the gothic mood domesticated as it infiltrated the city and the household to inflict its terrors, vaudeville emerged as another stage for its shudders of delight. In turn, film inherited the dramaturgical patterns familiar to those who attended séances or sideshows. Early cinema spread the appeal of the uncanny. Vampires, automatons, and undead filled the screens of Europe with a visual language that illuminated the literary and theatrical applications of an elongated, ectoplasmic, distorted conflict.

Bloom conjures up its cinematic captivation: “This is a weird world of shadow and light, theatrical make up and the stagy rhetorical gestures of silent film, but it is also a powerful world of floating images and of monsters who combine stillness with spastic urgency, their spectral gliding and glances to camera the basis of dreamlike fear.”
Movies channel today’s dissimulations. Our printed stories, Bloom avers, rely upon vampires far more than monsters. He suggests in passing why this may appeal to their largely female readership. Vampires combine “male domination with female empowerment.” Also, they can blend in better than ghouls or zombies into everyday haunts. Their “protean nature allows them to appear in bars or nightclubs as well as high schools.”

This book’s short scope hurries its final chapter. Bloom hastens over the persistence of the gothic essence in gaming, cyberspace, sexuality, fashion, and music (in this reviewer’s opinion he errs in crediting the very few bands he examines as primarily Goth).

Bloom addresses gothic transformation. Horror has moved from the external force taking away a body, or coming back from the dead. Instead of the gothic itself, a new kind of “soft-machinic body horror” permeates the contemporary body. It fears submission to a force that impels it by “torture and extreme violence” as the body “is split open and anatomized.” De Sade delineated vast labyrinthine dungeons where victims were immured; today’s gothic interiors make bodies “the new architectural spaces of fear.”

Currently, Bloom finds gothic energy less in bestselling spin-offs than in a corollary culture that horror films and television have spawned. Video games enable fans to enter spaces of fear. “So vivid can these games become that some of their creators try to build in the sort of mental confusion to their players that might be expected in real life encounters with monsters in order to enhance the imaginative and dream-like quality of play.” Rather than escaping reality, Bloom argues that those dressing up, filling dance floors, or losing themselves in role-playing continue a venerable tradition of excess, artifice, and safe play that frustrates the mundane and opens up the inexplicable.

This is a brisk primer, with generous excerpts from primary sources, free of jargon or academic posturing. Selected reading lists guide inquirers, while Professor Bloom covers a lot in a little book. It is recommended to anyone curious about why the gothic craze began, why it has lasted so long, and how it continues to translate its shape-shifting spells.