The Heart of the Revolution: The Buddha's Radical Teachings on Forgiveness, Compassion, and Kindness 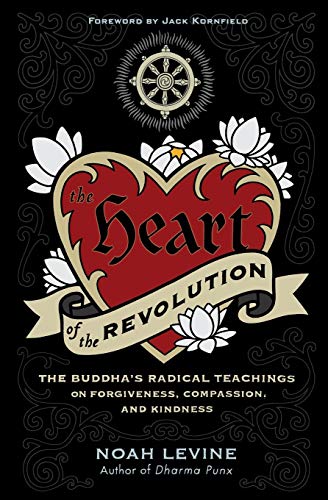 Bluntly, boldly, this book urges Buddhists to adapt its “radical teachings on forgiveness, compassion, and kindness.” Readers of Noah Levine’s streetwise memoir Dharma Punx (2004) will find in his third book a familiar blend of sharp talk and elevated reflection. There, Mr. Levine began by facing a third felony at 17 as a petty thief, crack addict, and disgruntled punk. He told of his recovery, enriched by his understanding of the meditative practices his father, noted American Buddhist expounder Stephen Levine, encouraged him to test out. Gradually, Noah found himself transformed, if no less rebellious. He channeled his anti-social despair into a desire to better himself and the world by radical, if wiser, action.

While his memoir (mirroring in tone if not approach Brad Warner’s Hardcore Zen) emphasized his own hardships and his Asian travels in search of meaning, it lacked detail about this dharma-teaching as opposed to the punk side of his formation. His maturation, fluently channeled as Against the Stream: A Manual for Buddhist Revolutionaries (2007) provided audiences with a calmer, far more nuanced introduction to what, for a few committed readers, could turn them towards liberation. In this second book as with this new one, he reduces autobiography. He blends his own life-lessons deftly, but sparingly, into a discussion directed increasingly at audiences already convinced about Buddhism.

Furthermore, Mr. Levine aims this study at the “1%ers,” the fraction of the committed whom the Buddha sought to convert. Mr. Levine aligns himself with fellow radicals bold enough to disregard religious pieties and social conformity. As a recovering addict, he defines this study into the reinvention of one’s self as detached from attachment to pleasure. (An addict cannot “just say no,” and cannot separate the thought that beckons from the desire that must be quenched.) Mr. Levine grounds his approach toward sober, but joyful awareness in the insight meditation that for twenty-two years has guided his path.

After ten years of practice, Mr. Levine struggled to forgive those whom he had wronged and who had done him wrong. In Dharma Punx and Against the Stream, he narrated how he went back to make amends. He admits in The Heart of the Revolution that his Buddhist commitment had nevertheless lacked a crucial element. His third book explains what it took him ten more years to learn after ten years as a Buddhist. Mr. Levine’s lessons on mindfulness transcend his meditative practices (appended in Against the Stream and somewhat repeated here) to an engagement with one’s self and with others that connects with “citta,” the heart-mind of Buddhism.

Sixteen chapters brief enough to be sampled each at once, long enough that they combine inspirational suggestions with often practical advice drawn from his study and his life, direct the reader into this hidden treasure. Meditation serves as the shovel; the treasure unearthed gets polished and refined into the heart-practice that as “metta,” or loving-kindness, expresses itself in disciplined contemplation leading to skillful action. (As no summation of Buddhist doctrine begins this book, Against the Stream might be studied first by any reader new to Mr. Levine; he also sums up Dharma Punx in that second book.)

Rope burns resemble attachment: You hang on to what you grasp. You hurt yourself if you don’t let go. “Nonattached appreciation” of the good, Mr. Levine counsels, replaces clinging. Similarly, pain will not go away, but suffering may, for that is how people hang on to pain, by reacting to it with instinctual aversion. The essence of Buddhism, compared by Mr. Levine to the self as but a rainbow, seemingly real but lacking substance as we behold it, offers this fundamental teaching. Mr.

Mr. Levine, more than Brad Warner’s Zen, nearer Stephen Batchelor’s philosophy as expressed in Buddhism Without Beliefs and Confession of a Buddhist Atheist, relies upon a non-theistic reaction to reject “buying merit or worshiping deities or teachers” that deludes most Buddhists. Mr. Levine urges readers to “abandon the unskillful and cultivate the good” by turning to the mind and heart rather than obeying power or gurus. The dharma’s direction emanates neither from divine revelation nor appeal to authority, but as “verified truth” tested by the practitioner, as the Buddha directed, before its sensible prescriptions could be taken as healing medicine by the suffering patient.

This book translates conventional responses of “faith” into more appropriate terms for secular seekers. “Inspiration” and “confidence” replace ideology or dogma. Perseverance remains a necessary component, to overcome the doubt and fear that tempted even the Buddha, long after his enlightenment. Mr. Levine warns how harm will not recede and pain will not vanish for Buddhists. “I see you, Mara” had been spoken over and over by the enlightened Buddha to the force representing hatred, greed, and delusion. His “seeing” Mr. Levine interprets as the Buddha’s acknowledgment of the persistence of temptation, and the freedom from hatred and ill will sought by a wiser practitioner of these heart-teachings. What must be learned for the practitioner becomes how to deal with pain, not how to escape from its presence. By not fearing pain, and by not expecting pleasure to endure, one gains balance.

Brief chapters discuss mercy, compassion, hurt, forgiveness, and types of love. Whereas Against the Stream by its advocacy of celibacy appeared to drastically narrow the potential non-monastic audience able to apply Mr. Levine’s teachings into daily action, The Heart of the Revolution corrects this direction. Mr. Levine acknowledges, now as a married man and a father, how sexuality may be channeled mindfully into a committed relationship, and this book improves upon its predecessor by his further experience.

The eighth chapter expounds upon each line of Buddha’s discourse called the Metta Sutra. I paraphrase this as the “teaching on lovingkindness.” Mr. Levine allows each line of this terse but tender lesson to unfold. He revises traditional reception of a few of its contents. He does not expect magic to swoop petitioners out from harm’s way, for instance, nor does he regard “being born again into this world” as literally as many Buddhists do.

He reckons how sorrow and joy will both accompany even the wisest Buddhist, yet “in harmony with reality,” Mr. Levine hopes that balance will assist the practitioner to adapt its message into everyday good deeds that better one’s self and the conditions of those whom the seeker meets. One freer from “sense desire” learns to love and to let go: not so afraid of losing what one longs for, and not so afraid of what one fears to find. The gist is to lose the craving for desire, the attachment instinctively bred into holding on to what pleases one’s self while running away from what causes pain. Mr. Levine allows flexibility in translating these verses into relevant remarks accessible to Western dharma students. By doing so, he elevates this central portion of his study into a very worthwhile resource.

The next chapter recalls a powerful parable of how “killing with kindness” works. Mr. Levine follows with his own account: “The young drug addict that I was as a kid is dead. I killed him with metta.” He compares the inventive deployment of kindness to situational ethics, and he anticipates rousing “a handful of committed assassins to inspire a full-fledged war against ignorance.”

Part three of his book continues his exploration. One drawback persists as Mr. Levine does not provide an overview of how he organizes his book. While short, it demands thoughtful reflection. Between chapters, few transitions or cross-references assist the reader. Mr. Levine cites no sources for his translations or other Buddhist texts incorporated. He appends only terse outlines of the essential teachings he enumerates in the text, except for dependent arising, which earns a wonderful extended analogy to craving an ice cream sundae in Against the Stream. That overview will help dharma novices.

The last section titled “Avoiding the Dead End of Religion” shares with Warner and Batchelor’s attitudes a lively suspicion of what 90% of Buddhists, in Mr. Levine’s count, fail to understand and to practice. Buddhism serves as a regimen aimed not at appeasing gods or bowing to statues, but at changing the world starting with one’s self. While for many modern adherents Buddhism may begin on the meditation mat, for Mr. Levine and his rebels, dharma must push one then out in the world, taking on the messy business of generosity toward “all living beings,” beginning but not ending with one’s self.

Gratitude and the application of mercy and compassion to increase pleasure as “nonattached appreciation” while easing the imposition of pain finds a thoughtful expression. Personal effort and the rare personal opportunity, Mr. Levine emphasizes, upon one’s human acquaintance with dharma must embolden readers to act on its teachings. As in Against the Stream, Mr. Levine includes the concept of balance in “equanimity” as a crucial factor. Here, he pivots into a consideration of karma in a frank, confrontational, and refreshingly agnostic manner that may show the influence of Batchelor.

While metta for Mr. Levine’s “old-school,” he raises the “new-school” (for him at least) Tibetan exercise of Tonglen. This exemplifies how “black, heavy, hot” pain can be inhaled by the meditator while “white, light, cool” compassion can be exhaled. Mr. Levine’s meditation practices always include how-to details.

His 14th chapter, on the Six Realms of Existence conceived in Buddhist cosmology for all living beings, neatly matches these up with previous chapters on particular heart-mind components. Mr. Levine locates analogues “for our varied human existence” as encountered everyday as one moves from an animal or hellish to a godly or hungry-ghost sensibility as we deal with cravings, desires, and moods.

Then, he sidesteps into how the conventional “poisons” of an existence tethered in this realm may show how human personalities follow one of three main types. He finds a positive spin to balance the trio’s conventional negativity. Therefore, a greedy, craving individual might be praised as confident; a hating, aversive person could turn discerning; a deluded, distracted one could show serenity.

Finally, Mr. Levine sums up his efforts with a reminder to join compassion with wisdom by a heartfelt program of improvement. He urges readers to get off the mat and put the dharma into true practice. He reminds his readers, given his American Buddhist orientation, how the dharma must now be enlivened.

While readers perhaps of the generation of Noah Levine’s father may not expect the stance taken by his son, who positions himself more from the street than the retreat, both Mr. Levines share an enthusiasm for making Buddhist teachings matter for a Western readership disenchanted with slogans and commodities. Noah Levine, for the children and grandchildren of the sixties revolution, addresses the betterment of one’s wounded society along with one’s self. By losing the insistence upon that fixed self, after all, he follows his father in agreeing that this latest stage in the revolution begins in one’s heart.