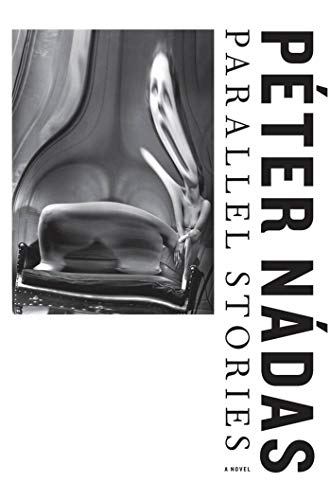 “Péter Nadás may infuriate readers accustomed to a Tolstoyan resolution of a series of interrelated stories and characters and times and settings. The author refuses to resolve his unhappy stories. Each will remain open-ended. Time and space, for him and his modernist creations, create a human and social longing to flee elsewhere, free of backbiting and spying, secret societies and endless bickering. Hungary represents a hopeless realm, confined between German power and Russian control.”

Robert Musil, early last century, tried to bring a modernizing and warring Central Europe into a massive work; he left its second volume unfinished. Péter Nádas picks up the saga a few decades later, as another war brings a neighboring nation into the struggle, following Hungary through its revolution in 1956 and its predicament in 1961 through to 1989, the year of its liberation.

This enormous novel combines, as its title promises, different characters and various approaches toward exploring personal and political survival within this sprawling, intricate story.

The scenes set at Buchenwald and among those surviving the Nazi terror, recall a socialist realist form of narrative: heavier on action and, if not heroism, then revenge.

For other segments during and after the war in Germany as well as Hungary, an inwardly focused novel of manners and subtler tensions shifts overlapping tales into revelations of betrayal, appropriately conveyed in asides, incriminations, and hesitations as much as confrontations. The opening section that begins the investigation of a murder in 1989 near the Dutch-German border follows the edgy, swaggering, uneasy mood of a mystery, full of diversions and evasions.

Mr. Nádas’ prose carries in Mr. Goldstein’s rendering the sensation of solidity and density, and this creates the pleasure and the pain within this epic work.

That is, the commitment to over 1,100 pages of serious writing that roams from character to character without warning—and depends upon an alert reader able to appreciate the considerable demands that a work 18 years in the making and four in the translating—may make this encounter a rarified one—for those able to navigate these confusing and chilly depths.

Mr. Nádas rarely has his characters laugh, and only one scene here elicited a chuckle. For a work concerned with eugenics, conspiracy, anguish, lust, evasion, and compromise under a variety of oppressive regimes, levity may be a rare commodity, contend

Jewish and Gypsy, Catholic and Protestant, fascist and fanatic, Nazi and Hungarian characters, many of which themselves are of mixed parentage. They are almost never happy. Those in power resent those beneath them. Sex enters many relationships, but it never connects people beyond such moments.

The explicit nature of this detached novel, conveyed with its intricate and extended descriptions of the aroused males and their pursuit of sexual release—less often in its fulfillment than its postponement—makes for a very difficult book to enjoy.

The blurb portrays this as the story of three men, spies in the Cold War era, but only two of them play large roles: Hansi von Wolkenstein aka János Kovách, and Ágost Lippay. Hansi was sent, as a bastard child, to a Nazi school where such youths were studied—this plays off other characters, including his mother, involved in eugenics schemes that employ Mengele among others, in Hungary as well as the Reich. One scientist muses over “independently inherited narratives” as intertwined within heredity, and this theme extends its tendrils over much of this work’s construction and intentions.

For instance, Ágost will entwine with his lover Gyöngvér, whose coupling takes most of 75 pages, certainly among the liveliest in this colossal story. Even here, however, Mr. Nádas refuses to give the reader a conventional narration.

The mechanisms of the male member earn great elaboration—both male-male and male-female pairings elicit clinical observation combined with if not soothing than enervating bouts rendered over many pages and many places, most of which are decidedly less than romantic.

An underground pissoir, a cockroach-infested bathhouse, rough trade in the park of dark Margit Island, and a dismal room in a dreary flat typify the settings where men, with or more often without women, pursue their release. Even the shadows of Buchenwald for a brief moment become a place full of such a possibility.

Mr. Nádas interrupts that precisely narrated encounter (and the semi-humorous interruption by a dim old lady of the dimly lit couple makes for my chuckle) with Ágost and Gyöngvér’s memories, which drift off and come back.

“Stories about the soul and about social relations scarcely touch each other; rarely is there a direct connection between them; they are two different categories written side by side.” So a neighbor reflects, in an interlude during the couple’s lovemaking. Nobody in this novel has their time on stage for long, even if dense chapters may roam over dozens of pages.

The lack of tonal difference among many who enter this story to articulate their unhappiness,, beyond the genre shifts earlier mentioned, discourages easy progress. Mr. Nádas prefers to cloak hundreds of scenes and many characters (an appended list would have helped, as this novel exceeds even Tolstoyan lengths) within an elongated, distended, wandering style which tucks revelations and explications within its narrative as if asides. This demands attention, and this attention flags over so long a book.

Yet certain moments persist, like one from 1961, when young Kristóf Demén pursues Klára from the counter at the candy store where she works across Budapest. This segues into a recollection of his burrowing into a bombed-out cellar as the Soviets crushed the 1956 rebellion; this then blends masterfully into a tense recreation of how a bread line created competition and then panic, heightened in turn by the arrival of tanks. One points its turret straight at those in line.

The resolution of this showdown, as is typical, will be delayed for many more pages, and then it will be related in passing. (By the way, the translator’s footnotes now and then do assist the reader less versed in Hungarian references about politics and history.)

Péter Nadás may infuriate readers accustomed to a Tolstoyan resolution of a series of interrelated stories and characters and times and settings. The author refuses to resolve his unhappy stories. Each will remain open-ended.

Time and space, for him and his modernist creations, create a human and social longing to flee elsewhere, free of backbiting and spying, secret societies and endless bickering. Hungary represents a hopeless realm confined between German power and Russian control.

The impersonal flesh contends with the personal imagination, reflects the omniscient, impersonal narrator. Neither passionate lovemaking nor desperate pickups will satisfy these men and women. They stay predators. They fail to find rewards across these restless decades.

Murder, sexual assault, backstabbing—figural and actual—and the insistence upon compromise for surviving these brutal times occupy the actions for most of these characters. When Providence is invoked, it is more likely by a Nazi eugenicist than a devotee, for few in these pages praise any power higher than their own desperate struggle to stay alive. Fulfillment stays distant; self-hatred curdles. For more than one of those condemned to be born when and where they are, betrayal becomes the promise, if not the realization, of liberation from regimes and police states.