The Graves Are Walking: The Great Famine and the Saga of the Irish People 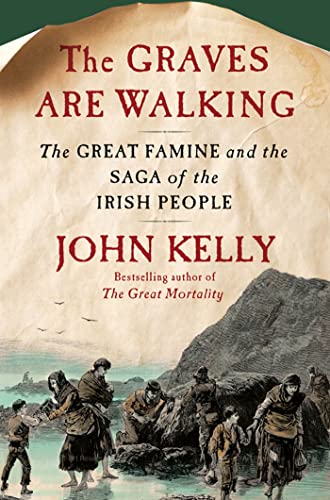 “John Kelly conveys an impressive study of the firsthand accounts, the government reports, and the secondary scholarship within a well-paced, judicious presentation of what too often has been distorted by Irish propaganda—itself marshaled to fend off enduring and cruel British stereotypes of a feckless people.”

Telling the tale of how over a million Irish starved and withered to their deaths while another two million emigrated from an already hard-pressed rural population of eight million demands steady control of facts amid so much emotion.

Earlier generations relied on Cecil Woodham-Smith’s The Great Hunger (1964) for this, full of data as well as narrative; I recommend a lesser known popular history, Thomas Gallagher’s Paddy’s Lament (1982) as a more compact presentation. The 150th commemoration of the Famine, or An Gorta Mór as Woodham-Smith’s title is rendered from the Irish language, generated new scholarship, some of it revisionist arguing against the nationalist propaganda which since John Mitchel’s The Last Conquest of Ireland (Perhaps) in 1861 had tilted Irish and their descendants across the post-Famine diaspora to curse a genocidal Crown and a heartless Britain when that kingdom was mentioned.
Science historian John Kelly comes to this daunting task of conveying in four-hundred pages of text a complicated explanation of the origins of the Famine; its impacts as it spread along two major periods from 1845 to around 1850 in worsening patterns; its entanglement within British principles of charity, Divine Providence, public works, poorhouses, workhouses, legal wrangling, and bungled relief; its effects as the native Irish fled to Liverpool, Canada, and New York City; and if too briefly its resonance for the Land War movements later in the century.

He conveys an impressive study of the firsthand accounts, the government reports, and the secondary scholarship within a well-paced, judicious presentation of what too often has been distorted by Irish propaganda—itself marshaled to fend off enduring and cruel British stereotypes of a feckless people.

Mr. Kelly intersperses sharply etched vignettes throughout his text; these play off the volume’s period illustrations of wretched squalor and pompous comfort well. (It lacks, all the same, an index and timeline.) He stresses a European context for widespread crop failure.

Contrast this with what in many Irish-authored Famine accounts has remained a parochial blight rather than a continental disaster. Rain pummeled Europe and spread the deadly fungus westward to the islands in the North Atlantic.

Comfortable with paraphrasing economic theory and climatic studies, Mr. Kelly early links the humble potato, relied upon far too heavily for its easy cultivation and cheap nutrients, to “the violent odor of decay” that became rapidly its telling smell, for years near the middle of the 19th century.

This Victorian era also promoted thrift, diligence, and the notion of a Divine Providence angry at indolent and “papist” Irish who, like their Scots highland predecessors, might better be used as workers elsewhere, their Celtic homeland put to large-scale farming or cleared for grazing to feed the needs of the British Empire. Potatoes were so affordable, so filling, and so simple to cultivate that this left the native Irish with all too abundant an amount of free time to drink, saunter, and procreate. This angered their perceived betters, who governed them from the Big House overseeing the farms, or from the estates in England whose rents were extracted by absentee landlords from such cartoonish, lumpish, simian throwbacks.

To their credit, as Mr. Kelly shows, some overseers intervened to try to save their tenants. Many gentry despaired of the decline in rent payers, while others looked forward to a cleansing of the land of its less dedicated inhabitants.

This practical insistence—coupled with a relentless exegesis that as a “Visitation of Providence,” the Famine was not a natural disaster but a God’s punishment “for violating His laws on food tariffs”—shows how the British contentions over the Corn Law and relief of the poor by tax reforms delayed sufficient assistance. This lack doomed many Irish, by the end of 1846, to an early grave or exile’s boat.

Scenes of devastation caught the attention of the London press early; Camus, Conrad, Beckett, Boccaccio, Joyce, and especially Melville’s Liverpool docks shown in his novel Redburn (1849) all gain appropriate context placed by Mr. Kelly alongside the eerie desolation and physical annihilation that appeared to clear life and leave only corpses from many sodden, stinking, howling landscapes. Shallow graves filled and emptied, as packs prowled and feverish bodies, dead or dying, sprawled in dark cabins.

Mr. Kelly sums this all up in one of many finely penned passages: “In areas devastated by the blight, the familiar scenes of deep scarcity reappeared: men standing in early-morning fields, sucking the blood from the neck of a living cow, seaweed on the boil; grass-stained mouths and hands; women running an anxious hand over a sleeping child to see if she still breathed.”

These images found verbal and visual illustration for many readers abroad. This is where Mr. Kelly’s analysis sharpens: he provides necessary context for how the British responded and why. Their “relief policy was never deliberately genocidal, but its effects often were.” This careful distinction applies to the chronology he sets out. What in 1845 began that summer as a tragic harvest worsened after the fumbled and hesitant relief given far too few among far too many afflicted failed.

Eighteen months on, the stubborn British moral that God’s hand dealt the improvident Irish natives a blow they deserved for their poverty and superstition contended with those imperial ministers who reckoned that “salutary” change might improve the plight of a people deficient in “initiative, industriousness, and self-reliance.” Meanwhile, who merited handouts as bodies filled mass graves or were dismembered by rats and dogs was far too long debated in Westminster.

The London Times editorialized: “There are times when something like harshness is the greatest humanity.” Tough love, it appeared for many British lords and landlord, would teach their Irish rent payers timely lessons. Social engineering meant that relief policies could be implemented, and religious principles might align with economic reform. So reasoned, if after long bickering, a few in London.

Queen Victoria in January 1847 spoke of “the dearth of provisions” in her nation’s oldest colony. This spurred “the first celebrity-heavy international charity event” sponsored quasi-officially by a Crown suspicious of public funding when the private sector could raise, by today’s equivalents, about $250 million in relief.

The Irish, however, could not wait for modernization schemes. Mr. Kelly reminds us how Ireland then compared to Haiti, Somalia, or the Congo now. While Mao and Stalin perpetrated deadlier famines and heavier casualties, the impact of the Famine hit the small island harder, for it lacked enough people or enough alternative resources to sustain the force of mass deaths and social collapse.

A battered Ireland lost three million of her people in a few years, even as grain continued, for a while, to be exported while more was imported. The trouble was, as Mr. Kelly shows perhaps too subtly, that the two exchanges of foodstuffs did not synchronize. This followed a second summer, in 1846, with rotting crops, leading to the disastrous year of “Black ’47” when deaths soared still higher.

That spring, public works—roads to nowhere, hills decapitated, holes filled in—stopped so the Poor Law could start and Alexis Soyer’s Soup #1 (splendidly described in its preparation) could be doled out at kitchens. This shift cut off aid to any small farmer eking out a living on more than a quarter acre. This cut off many already on the edge of starvation. This caused pestilence, scurvy, and disease to exponentially accelerate. This pushed many millions to flee to the ports.

The landlords and Crown often hastened their exit, envisioning the success of their social model. Too much charity meant that the victims would rely on it.

Yet, as Liverpool found its conniving, greedy, portside con artists overwhelmed by the often illiterate and often Irish-monoglot emigrants who filled its docks and flophouses, and as London faced a thousand new immigrants a day to sleep in its parks, the Crown’s strategy backfired. Many newcomers were too poor to afford Canadian or American passage. Those who did may have regretted it.

Grosse Isle lingers ominously in Irish Canada for its precipitous mortality rate; this embarkation station found itself the terminus for what would be 20,000 dead Irishmen, women and children in the dismal summer of 1847. That humid season felled many unused to the drastic weather and weakened further by infested environs after a horrid sea crossing.

Down the Atlantic seaboard, nearly half of those arriving in New York City in 1848 were Irish; a few years later, over a fifth of all Gothamites were Hibernian-born. Tammany Hall, “Dagger John” Hughes, and the scams perpetrated on the hapless immigrants, throughout the 14th and 15th chapters here, gain splendid summary and elegant elaboration.

It’s a familiar storyline to those immersed in Irish American study, but Mr. Kelly’s deft control of when to pause and gawk and where to glide by makes for a streamlined, moving, and smoothly conducted tour.

Similarly, his conclusion taking us back to a changed homeland telescopes the failure of the brief 1848 Young Ireland rebellion, the decline of the “Liberator” Daniel O’Connell, Fenians, and Land League reform attempts of the later century understandable for a general readership. The Famine’s legacy led to landlords evicting more tenants. The “poor rate” rose by 1000% between 1847 and 1851.

That latter year, my family’s ancestral farmhouse was rebuilt. I learned from The Graves Are Walking that the Catholic diocese in which it crumbles (as a ruin today) declined in population by 10–17% in a few months of the Famine. I know that the county today has about a fifth of the people who lived there pre-Famine.

I also recall how my great-grandfather left that county to agitate in London in 1898 for land reform as part of a local delegation. My family lore has it he was “found drowned in the Thames, in mysterious circumstances”—another reason why I closed Mr. Kelly’s impressive narrative history reminded of why so many Irish, abroad or back home, possess such long memories after such hard times.