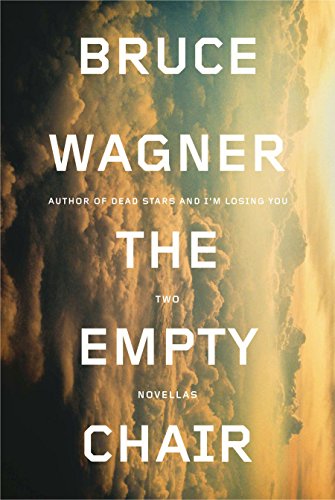 “. . . revelation may lie within the reach of the lonely pilgrim, in the pages of the devotional text, or in the conversations of the fictional characters [the author] tells us are real.”

These paired novellas explore a triple significance of this titular piece of furniture. They convey in casual yet erudite and often blunt language, the lessons learned by those who grapple with sudden departures by loved ones. Their despair, mingling with a typically Westernized, upscale variety of spiritual quest, flows through these two monologues from Americans now in their fifties, told to what we assume is a fictionalized Bruce Wagner, who claims to have "redacted" them in "the summer of 2013."

Known for scabrous satire about Hollywood's addled or addicted insiders, Wagner here explores what may be a natural if lesser known milieu for him and his affluent, privileged, and erudite storytellers. His fictional narrators look to "diet Buddhism" and New Age teachings for guidance; the author himself has been a devotee of Carlos Castaneda; therefore, he knows this type of set and setting well.

Told by a "First Guru," the unnamed narrator of the first entry over 100 pages relates his identity as a gay man. Molested by priests in his teens, married to Kelly, who does not discriminate between men and women in her own romantic liaisons, he lives in a furnished van shelved with his favorite books in Big Sur. At the time of this story's telling in 2010, he parks himself at a Catholic hermitage. At nearby Esalen, he meets "Bruce" in a hot tub. There he commences what will be a backstory including Ryder, the son he and Kelly created.

A self-described "motor-mouth" the narrator worships the Beats and Thomas Merton, as well as medieval mystics Julian of Norwich and Hildegard of Bingen. He shares their search, while divesting himself of Catholicism to pursue Buddhism, along with Kelly. Yet she surpasses her husband on the road to find, in her borrowed phrase, that "impermanence rocks." For she markets the dharma to Marin County schoolchildren by her trademarked campaign to rouse "Armies of Awareness."

Wagner as expected sends up this sort of ambition. Kelly lands a $20,000 advance from Chronicle Books "for a memoir about being a menopausal, bisexual, Berkeley-bodhisattva." The glib catchphrases she peddles will haunt her; loss forces the couple to confront their own heartache.

"To save herself from the unbearable anguish of the present--present imperfect tense—present impermanent—Kelly had to take up residence in the future—future perfect permanent. The present, once venerated while she was an ecstatic, card-carrying member of the All-We-Have-Is-This-This-Moment! cult, had been stuffed in the recycle bin along with its jealous, immutable, implacable shadow, the past."

The narrator longs for a "teachable moment of" one's "own death: the lesson of impermanence." This may arrive, but may not come until one's last breath. This story segues, after a second introduction by Wagner, into one told to "Bruce" five years earlier, in the New Mexico desert.

There, a similarly affluent and formidably confident narrator, who nicknames herself as Queenie, lives also a nomadic if even more coddled existence. She travels about "in an imposing black bus with a full staff." Sporting kohl-lined eyes, she dons gypsy dresses, "half-Zaha Hadid, half-Stevie Nicks."

Her story stretches back to 1968, when she was 16. She, who seems more to boast than regret having "three kinds of VD" by the age of 13, grows from "wild child" to "Earth Mother" as a countercultural Eloise, rootless from normal residence, brought up allowed to roam her domain; however, as with "First Guru" as designated by the one who takes down on tape their stories to transcribe, "Second Guru" cannot escape the reminders of transience despite her own charmed life.

"Think of yourself as a spelunker—join me in my nightmare, won't you?" So she invites "Bruce" in, early on, and what follows in an extended cave-diving metaphor takes up five pages. This type of expansion, characterizing both garrulous tellers, may weary those less enchanted. As Wagner warns at the start: "The 'authors' here are vessels, not virtuosos." That is: They do yammer on and on.

Such verisimilitude—even as the transcriber assures us he has edited and streamlined their revelations—can drag down the pace of both novellas, even if it convinces us that "real" people told them. This type of craft, subtle in its insistence that these stories truly happened, displays the "real" Bruce Wagner's skill in a nagging but accessible manner, masking itself as what we find around us footnoted for our consumption as increasingly "inspired by true events" or "based on a real story."

Queenie possesses awareness of her own "inspired pastiche"; portions of this as tellers fold into each other layer four times over. No wonder she compares herself on "silly tangents" to Scheherazade.

One difficulty for believing these stories as genuine emerges in the similar tone of both novellas, and the manner in which long-ago monologues gain precise re-creation by considerably retentive hearers. Ryder's father admits of the aftermath of the discovery he and Kelly must deal with: "O we had mourning sickness (mourning with a 'u') for sure!"

Despite the "fact" that narratives by Queenie, Kura (an African-born Francophile), an Indian "Great Guru," his wife, and the Guru's successor, "The American" all elaborate the second installment, these five international and multilingual tellers do manage to sound not much different (despite what we are told is the wife's "comically fractured syntax") in diction or content. For instance, Kura laments of the wife: "O, she cast her meretricious net far and wide, tarnishing all the fishies in the sea!" These tellers regale themselves with like wit.

Wagner may be indulging in his own reminder of truth-telling and fact-checking, as he too inserts himself into the two sections as listener and editor. Yet both tales do, by revealing their protagonists' dogged efforts to break free of surety, manage to sustain interest, for those possessing a compatible interest in spiritual journeys told by affable, if coddled, guides who have been there and done that.

Summoned 30 years after their first meeting to reunite with Kura, Queenie's hesitation proves recognizable to any reader. She sums up herself in 1997: "A depressed, childless, perimenopausal woman, unlucky in love, with a shelf life of self-esteem long past its expiration date, I presumed I would throw off a medley of scents: potpourri of moribund pheromones, burnt adrenals and brokenheartedness."

Near the end, the significance of the title Wagner offers deepens. He began by referring to the gestalt practice where his therapist set up an empty chair for the analysand to talk to, as that space allowed a place for the patient to make more concrete his absent focus, the invisible person from the past whom he or she wanted to confront or appease. Queenie reports, in one layered conversation, how her long-sought holy man asserts "it is only the second guru that allows you to make sense of the first." Another analogy then blends the two stories, and the two gurus, in patterns that reverberate.

Wagner wisely structures the two stories to draw out the maximum potential of his metaphors. While their pace may slow, for better or worse to make it appear as if we too are listening to hours of one confessing or chortling over past triumphs and present humblings, The Empty Chair succeeds in presenting the often-caricatured or sometimes smug searches undertaken by those able to afford such quests and it convinces the patient reader that revelation may lie within the reach of the lonely pilgrim, in the pages of the devotional text, or in the conversations of the fictional characters he tells us are real.