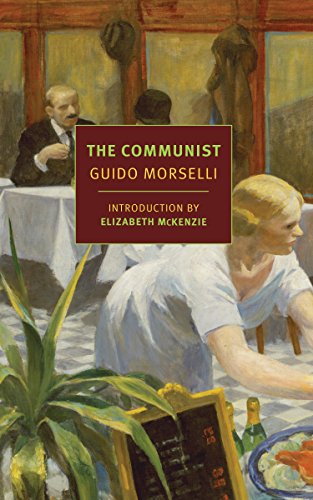 “From Italy’s agricultural heartland, largely an autodidact, Walter Ferranini doubts the sincerity of claims for the dignity accorded labor by ideological spokesmen for the post-war communist regime.”

Ignazio Silone's rambling trilogy of novels set in the Abruzzo followed the fortunes of a Communist community organizer disguised as a priest, and the laborers he sought to convert to the cause, with mixed results as Fascism took over. Guido Morselli (in this reissue of a novel published posthumously in 1976) provides a far calmer look at what happens after these Reds survived the war, and secured power in mid-century politics. From Emilia Reggio, Walter Ferranini enters Parliament during Italy's leftward upswing. In the wake of de-Stalinization, he examines himself and his party; fortunes challenge them.

By the end of the fifties, Ferranini dithers over the petty duties of both party and his constituents. But the bulk of The Communist, newly translated into jittery bursts and preoccupied reveries by Frederika Randall, concerns itself with another of Italy's everyday protagonists. He lacks the leisure afforded his humbug predecessor Zeno in Italo Svevo's novel, but he also enjoys the prosperity lacking for Silone's farm-workers.

Courted by Moscow, invited into the Cold War tensions as well as the post-war boom for Europe, the Italian aspirants toward equality in these meandering pages of Morselli seek, through communist politicians, the proletariat state. His central character insists: "I'm here to represent the base, not to advance it from above." He dismisses the favors granted and niceties sought by sycophants. But, he also faces his laziness, and obliges himself to be "the opposite of what I am."

This tension deepens. He questions how a party bent on collectivism can be led by "men whose prime motive was to emerge, to distinguish themselves from others," and he pursues purity. Lenin discouraged music, and so Walter avoids "clinging to memories, reading novels, taking an interest in sport, falling in love when your hair was grey." Only forty-five, he acts much older, and his mistress, Nuccia, chides him for his hidebound ways and his detached mien. Her lover clings to struggle, to achieve the socialist dream, amid an indifferent, corrupt, compromised culture. He questions this.

He confronts his colleagues. "We socialists believe in a process that not only comes to a conclusion, but to a fine and happy conclusion. the triumph of man over injustice. We await a society without privileges and above all without conflict. Now, how do we put together these two views?" He writes an article, elaborating his unease. "When the exploitation of workers has disappeared, will the burden of labor also disappear?" From the agricultural heartland, largely an autodidact, Walter Ferranini doubts the dignity accorded labor by so many ideological spokesmen for the communist regime.

As Walter Ferranini discovers during a dispiriting tour of the Soviet Union given him and his fellow admirers, machines appear to worsen rather than ease this toil. Technology makes a man driven to produce, wearing out energy, while "leaving him just about able to eat, sleep, and reproduce, thus creating other struts of flesh." But his comrades fear his queries. "Let's hear who you are pledged to. Yourself, or the party?" Ferranini despairs that labor will never cease, and thus alienation cannot cease.

This interpretation creates dissension within Marxist ranks. Guido Morselli's narrative explores the consequences of Walter Ferranini's position. Morselli triangulates this intransigence with two other figures, Nuccia and Walter's estranged wife, Nancy, whom he left behind in America. There he had fled during Mussolini's reign, and from there he had returned in 1945.

The dated depiction of the land where Sacco and Vanzetti defied the prejudices of their adapted homeland lingers too long in the memory of their acolyte. Many scenes depict Walter as he seeks success among the East Coast bourgeoisie, perhaps based on the author's own time abroad. These emerge in extended scenarios, the first reasonable, the second farfetched.

Thus, the climax and denouement of this sojourn to Nancy and her divided country drift away from the earlier discipline exerted by the author over his dramatization of high-minded theory and practical application. An allegorical figure wanders in as if from the unfinished plot of Franz Kafka's Amerika, to warn off Walter as his communist loyalties simmer, stir, and sour. "Don't you envy the people with money, no sir. In America all men are equal. All equal, and all alone."

This observation cannot be gainsaid, but The Communist fumbles. It can sustain neither the convincing presentation of Walter nor the predicament he finds himself in as the plot rouses up melodrama rather than the detailed earlier attempts to balance a didactic interrogation of party fidelity with a resolution of this dogged idealist's fate.