The Illusion of God's Presence: The Biological Origins of Spiritual Longing 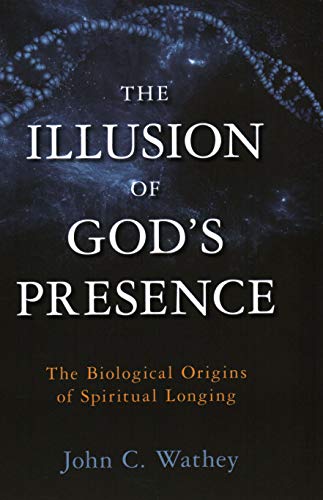 “Rather than theological bickering or ‘irrelevant moral imperatives,’ Wathey reminds us of our humanism and our hubris.”

This computational biologist crunches the data to investigate why humans "are prone to the feel the illusion of God's presence." Examining evolutionary theory, John C. Wathey looks at the hardwiring that underlies spiritual and religious emotions. He explains that his sequel will tackle mystical experience, while this first volume disenchants readers who may be caught up in unverifiable beliefs, and who may assume that the call of the ineffable or intangible belongs only to humans in nature.

Instead, "belief appears to be a completely natural, neurobiological phenomenon." Wathey compares religion to language as a cultural universal, to which our makeup predisposes us, and one that our cultural exposure shapes into a particular expression of our faith. This may or may not be a personal God. But Wathey confronts the problem at the heart of such a being in the Western monotheistic tradition, as well as in certain Hindu sects. Cruel judge or loving presence, the Almighty in this dual manner rules over 80% of the world's faithful.

In his phrase, Wathey grabs the elephant in the room by his tusks. He draws from his own experience for a religious encounter, according to his definition, which happened to him as an adult and as a non-believer. Devoid of spiritual content, this event nonetheless matched the parameters for an otherworldly intrusion. This puzzle drove him, raised Presbyterian, to write The Illusion of God's Presence. He wonders why so many naturalistic definitions of faith avoid accounting for the believer's subjective experience.

He labels such a situation as a by-product of "a human neo-natal survival instinct" built on an "infant's innate neural model of its mother." Born with a "circuitry" as a bond and as dependence, the adult version normally lies dormant. But under stress, this innate model triggers religious belief through religious experience. A certainty that God exists as a presence is felt. Prayer, linguistically, replaces an infant's cry for this comforting maternal being. Humans relate this to their previous cultural model of a spiritual deity. This may account for the persistence of the feminine in so many spiritual conceptions, sexual obsessions, compulsions to pray, and the allegation that women believe more.

Basing his concepts on biology, sea turtles, gulls, or rhesus monkeys (to name a few), Wathey offers precedents for innate cognition. Our conceptions of God may be supernormal stimuli that fill a God-shaped vacuum (adapting Francis Collins' metaphor) with emotion and cognition. Wathey reckons that God's presence as humans sense it is "largely innate" on a neural basis. The detail as Wathey's argument continues may overwhelm the less biologically fascinated among readers, but the documentation and the evidence, sifted thoughtfully, should enable audiences to support the author.

Wathey advances beyond Freudian theories to critique a dual personality model of a God, who as Roger Finke and Rodney Stark determine, operates successfully within a religious organization by a theology "that can comfort souls and motivate sacrifice." He inserts testimony from a follower and survivor of Jim Jones' People's Temple as a powerful cautionary tale about the dangers of credulity.

Most of this book investigates, however, not the social but the neural root of the biological causes nurturing religious beliefs. That comfort of a personal caregiver clashes with the demands by a formalized authority. Wathey argues in part two that a two-dimensional approach explains why a religious or spiritual emotion persists. Cognitive theories are also biologically based, but only this dogged dual-root system delves deeper, he asserts.

In the last third of this narrative, Wathey shifts from the "why" to the "how" as neuroscience begins to include behavioral, psychometric, and twin studies. Wathey integrates these to start to scrutinize the "sensation of God's presence." Wathey avers that this may be an "accidental consequence" of evolution. A "trick of the brain" may endure in human adults, that another being exists, who may bring us love and comfort.

For many grown-ups, religious emotion resembles addiction, while certainty without proof characterizes faith. For "in the light of biology, God is a spiritual phantom rather than a supernatural spirit." Born with a longing for this being, many humans craft this desire into a being. Those who believe tend to increase their offspring and pairing with mates similarly inclined reinforcing mutual trust as adherents of a particular cultural manifestation of this "universal" formulation. Wathey left this reviewer wanting more, but after all, a second book is in the works.

Concluding, Wathey welcomes personal implications. He particularly urges his readers who have become uncertain about their own faith to face these scientific findings bravely. He examines mind-body dualism, the hope of immortality, and our duty to care for our earth.

Rather than theological bickering or "irrelevant moral imperatives," Wathey reminds us of our humanism and our hubris. "We have eaten of the tree of knowledge, and no God had to cast us out of our earthly paradise as punishment. We are trashing it ourselves." Leaving behind fear or hope in the imaginary, John C. Wathey in this erudite, engaging study guides readers toward a secular ethics aimed at reducing our numbers and easing our impact upon "the web of life that is our real creator."