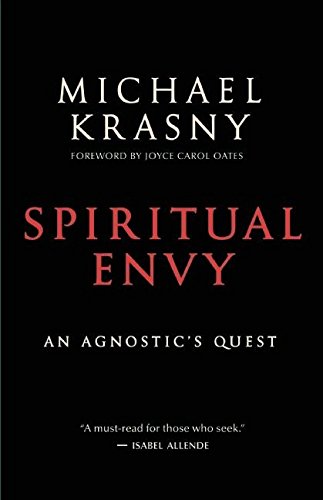 If there may be no God that we can prove or deny, why be good?

Michael Krasny, a literary critic and NPR interviewer, finally gives agnostics a book worthy of their own misunderstood quest for meaning when “God is missing in action.” In this intellectual rather than emotional response to the big questions, Krasny admits his own envy of those gifted with the “consolation of faith.” He enters the vacuum left for modern people unconvinced of the presence or absence of God. Instead of the often arrogant triumphalism of the neo-atheists, or the steady conviction of many believers, Krasny offers a philosophy grounded in uncertainty, yet one that demands that the right questions are asked—even if answers elude the agnostic.

Unbelievers and theists both assert they have proof. Krasny finds that atheists “resembled fundamentalists in their atheism,” yet he cannot accept their reduction of a creator to “the traditional, anthropomorphic God tied to religion’s dark history.” Instead, he looks to his childhood Judaism for a moral code based on the Ten Commandments, yet open to an existentialist honesty enriched by his literary and cultural inspirations—whether Mort Sahl or Samuel Beckett, Ernest Hemingway or Mel Brooks, San Quentin’s prisoners or his accountant who doubled as a magician. This combination of the personal anecdote and the erudite explication deepens the impact of Spiritual Envy: An Agnostic’s Quest.

Krasny reminds us that we need a code to live by and to judge goodness by. Intentions fail unless they can be backed up by absolutes. Aware of the dangers of utopian reverie, he critiques John Lennon’s song “Imagine” as “a sweet and futile yearning for a sand castle in the sky made manifest on earth.”

Krasny maintains a sense of humor as defined by both sides sitting on the spiritual fence, mingling humility with wisdom. He muses: “Whether one can be selective about God’s commandments and religious ideals apart from theist authority or atheist certainty strikes me as a gnawing question answered inevitably by choice, though choice devoid of true certainty.” For secular humanists “may believe they are good without God,” but they too must take their denials on faith.

When he brings up how embedded God’s utterance is in our daily speech, Krasny opens a fresh perspective. He asks us if we can speak this name without conjuring up what it signifies in our mind’s eye; he speculates if we can ever get beyond “ineffable mystery or a white-bearded patriarch.” He challenges his readers to try to figure out how to create God without answers to questions of God’s existence. Can the unutterable or ineffable suffice for imaginative humans?

His journey toward a moral compass provides the narrative arc. In Spiritual Envy, Krasny tries to let go of the need for seeking God. If a code can be crafted, one might let go of the question of “why is God?” Instead, one may “indefinitely postpone seeking an answer to what, where or when,” even surrendering the need to ask such questions at all. He avers that many who seek spiritual sustenance are “bootstrap agnostics.” They share his longing, due to their disaffection with “the demands of religion” or their refusal to countenance to “its bloody and awful history, its stringent moralities.” This is one section deserves further articulation; Krasny contemplates these ideas movingly, but too rapidly. This discussion, within the chapter on “The Universe and the Face of God,” as with his earlier ideas about God’s identity, mixes poetic reflection with critical insight. Despite its compression, it may direct readers to meditate upon their own allegiances in ways that transcend the belief-unbelief binaries.

This attempt to overcome such dualism derives from a comfort with the unknowables. T. H. Huxley, as “Darwin’s bulldog,” invented the term agnostic as one who doubted that knowledge had all the answers for mid-Victorian England’s inquirers. This term then spread to take on the doubts over the efficacy of belief, and Krasny draws considerable attention to the pioneering figure of Robert Ingersoll, whose essay “Why I Am an Agnostic” predated Bertrand Russell’s better-known “Why I Am Not a Christian.” Huxley and Ingersoll popularized an “indeterminate neutrality” that remained open to evidence from either theism or atheism.

Apropos of all this, Krasny skims past Dawkins’ The God Delusion where the author admitted that atheists cannot ultimately verify the divine absence. They may instead edge toward very dogmatic agnosticism. Krasny rushes past his own radio interview with Dawkins, a summary of which might have enriched this discussion.

Rather than the wishy-washy stance belittled by neo-atheists and condemned by believers, agnosticism for Ingersoll strives for Huxley’s pursuit of knowledge but in this iteration as the pursuit of the infinite. Ingersoll sought the eternal in an indestructible grain of sand, the union of matter and force. The natural theory may have been overturned as we know now, but his ideal for a natural, everlasting basis for our understanding may mesh with more current ideas about our universe.

These deep questions, as Krasny spends over 200 thoughtful pages considering, may continue to elude us no less than, say, what happened before the Big Bang. Yet, as scientists ask, so does he wonder about the meaning of our existence as an agnostic. He calls himself a “spiritual wallflower on the sidelines watching and learning and absorbing without the willingness or inability to cast off doubt and skepticism and join in the dance.” He finds kinship in Beckett’s “wait-and-see tramps,” in Waiting for Godot, and in Kafka’s Hunger Artist, “who simply did not like the food”—or as Krasny would say, “what is out there in the spiritual troughs.”

The uncanny fascinates Krasny, and chapters about the paranormal, the coincidental, as well as the age-old ponderings about good and evil fill later pages with many tales worth telling. He wishes he could find a spiritual regimen, but he seems constitutionally incapable of signing up. He respects believers and cautions the disrespect of many secularists; from his radio interviews he provides many examples of how his own tolerance has expanded from his talks and his travels. While some readers may fear this smacks of name-dropping—as he comments on the many famous people he has watched, asked, and challenged, in the context of his profession—as these people reside in his milieu, the name-dropping appears appropriate and relevant.

Krasny also takes up eternity and time and feels that if we are time’s prisoners, “then God, if he exists, is our jailer and perhaps also our warden.” This typifies how he invites the reader to witness his own investigations into matters that any book by a believer or denier may also follow. Yet his stance as a committed agnostic makes Spiritual Envy a lively, congenial conversation as he talks to himself on paper about his ideas, letting us listen in.

While never repetitive, the concentrated nature of his prose does make this a book that may reward slower appreciation rather than rapid perusal. A palpable determination to keep exploring difficult topics lures the reader on, and this pace can weary the less committed follower. Krasny avoids jargon and keeps the reader as close as one of his interview subjects, remembering the common listener when he talks: “Think honestly about what or who allows you to temporarily escape the onus of time, and you will have discovered a great deal about who you are and what you need in this life and, if you believe in it, the next.”

Krasny nears the end with a “central question” unsurprisingly still not answered: “If no spiritual power is behind life’s elevations, or behind the Ten Commandments or scripture . . . and if we doubt the origins of moral or spiritual authority . . . and if we cannot determine what is worth dying for . . . and if we are as uncertain whether the soul exists . . . then how do we derive purpose, our code, our meaning?” He answers himself: The code we choose may solve our dilemmas.

Krasny sums it up by returning to the problems that have filled his intellectual and spiritual life. He concludes that while writing this book has not ended his search for these mysteries and their solutions, he holds more faith than ever in the power of asking the right questions of himself, and of us as his readers.

This modest, yet admirable stance, then, represents Krasny’s own calling: to take on the same challenges that inspired his Jewish ancestors, his favorite authors, his many journalistic moments, his students, and those whose lives and ideas fill this book.