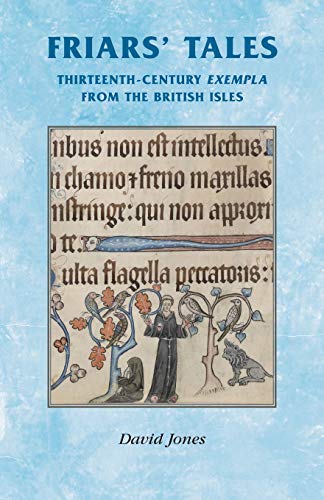 “Friars’ Tales, intended for seminars on medieval religion and popular culture, may also benefit any reader eager to find out more about how men and women once may have conceived their world and the next world.”

Chaucer’s conniving Pardoner and crafty friars may linger longer in memory, but real-life counterparts of those who preached sermons and promoted indulgences have long been relegated to manuscripts. The last quarter-century has produced more accessible, if still pricy and academic, studies of how sermons worked to convince their audiences and how clerics organized their contents. David Jones, with an affordable, accessible, small volume, offers today’s audience a chance to read what their ancestors may have heard eight centuries ago.

He annotates brisk, fluid translations of the two earliest known British Isles collections of exempla, illustrative stories that preachers used to grab the attention of their congregants. Relentlessly moral, these hard-sell tales also allow us to glimpse what sustained a listener—who likely had little to no literacy if a layperson—as to what beliefs and attitudes of popular culture survived in towns and on farms away from the quill-penned parchment. These two collections originated in the late 13th century. An edition of the first, the Latin anthology Liber Exemplorum, was edited by A. G. Little in 1908; it was organized by an English Franciscan friar, who later worked in Ireland, trained in Paris alongside his famous confrere Roger Bacon.

Unfortunately, the 213 exempla contained in this Franciscan manuscript represent probably just over half of what was intended—we only have the first volume that ends with “M” in alphabetical order of its thematic contents. (The original survives in one copy, now at Durham Cathedral.)

Still, the value of this anthology remains, for an eighth of the stories can be found in no other source that we know of. This friar adds useful asides to his fellow friars, commanded to spread the Word with careful words, as the lively stories interspersed might offend or scandalize or tempt the laity—for clerics, more candor is allowed them as insiders into the difficulties within the cloister.

Viewing what captured the ears of audiences in medieval Ireland and Britain reminds us of what techniques endure in rhetoric and advertising today. Listeners constantly are assured by names, places, and “I heard this from so-and-so who witnessed it in the presence of this-and-that. . . .” of the veracity of the miracles, sins, visions, and dangers which assailed the deluded, the vain, and the unwary.

Sermons are meant to convince the Catholic of the efficacy of the sacraments, the mechanisms of hell and purgatory, indulgences, and Masses that constituted late-medieval Church teaching, and to stimulate constant repentance. Countless miscreants delay confession in these vignettes only to choke, writhe, and collapse before a priest can be found to shrive them.

Therefore, the impression of urgency upon the listener to act now, a mainstay of salesmanship, endures. The friars charged with evangelizing the everyday folks who flocked to their sermons were enjoined to do so by the necessity of this task to save souls, and the practicality of continuing an intricate economy that sustained their own Orders and their own upkeep. Their listeners had to attend Mass, but they also might come upon friars as they held forth at festivals, markets, and frequent feast days.

Throughout the Franciscan’s collection, reminders to the clergy are given on how to modify, emphasize, or rework a story so as to stick in the minds of their impressionable audiences. Mr. Jones, in his introduction, notes how these sermons “indicate what preachers thought a congregation might find plausible, and they therefore constitute an important source for the mentalités of the past.”

Scholar Alan E. Bernstein is quoted by author Jones as to how exempla demonstrate a “clerical calculation of popular concerns,” and how preachers had to keep their credibility about the most astonishing reports shared. The Franciscan author notes more than once his own presence at the recital of amazing stories, or vouches for them as seen or heard or endured by others. By such referrals to authority, appeals to truth prove convincing.

For instance, one example elaborating the impact of prayer comes from the very village where his own father lives, he relates. A clerk named John tramped out in the middle of the night to visit his concubine. (The friar knows them both.) As the errant clerk sneaked out to his lover’s neighboring village, a large dog loomed. The dog whirls around and challenges him in English: “Give me your sword!” The clerk refuses, gripping the weapon while defying his adversary, replying “still more fiercely in English, ‘You lie, by the death of Christ!’” The articulate enemy is shown then to be the devil in canine disguise. But the beast disappears instantly to attest to the power of prayer—even when Christ’s name is invoked by a sinner.

The accompanying collection, by a Dominican friar based likely at Cambridge, fills its contents with similar tales. Even if Mr. Jones eschews comment on the differences in tone or emphases between the two manuscripts as literature, the latter anthology to me appears slightly more elevated in style, if equally dense in everyday name/date/fact stolidly arrayed to prove that the fantastic contents are not fevered fiction.
Mr. Jones selects 52 of its 315 stories. These are less helpfully arranged than the Franciscan edition, which itself by contrast reveals valuable insight into the nature of how such material could be packaged for users. The Dominican does not intersperse advice about the adaptation of the stories but lets them follow one another without comment or headings. About 40 percent of its contents expound upon dogmatic matters, and the rest treat of sins and vices.

One example, the last exemplum included, tells of a Norwich bailiff—a profession proverbially treated along with lawyers as avaricious, rapacious, and cruel. It conveys this slight shift in style. The “still hard-hearted bailiff” dies, and his son asks how he fares above or below. His father replies: “The Son of God denied me and took me up most harshly and placed me at the centre of His wheel, where the axle of a cart or wagon is always turning, where there is never any rest but always toil and travail while the cart is drawn by animals.” The careful phrasing, the extended syntax, and the humiliating nature of the haughty bailiff’s punishment all illustrate the use of a typical image and inclusion of dialogue to drive home the moral of a typical tale.

Friars’ Tales, intended for seminars on medieval religion and popular culture, may also benefit any reader eager to find out more about how men and women once may have conceived their world and the next world. In his introduction, Mr. Jones explains the contexts for sermonizing and for the imperative upon priests to educate the unlettered and the common folk as well as their fellow clergy, depending on the adaptation of the contents. Finally, an up-to-date bibliography allows scholars to learn still more about the wide range of themes and applications employed by those who incorporated sermons and stories into their own efforts to save souls