Paradise Lust: Searching for the Garden of Eden 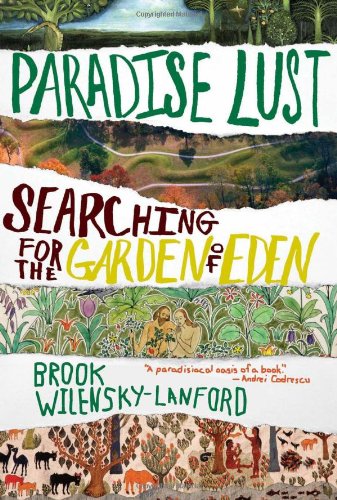 Expelled from Eden, wanderlust may have been one curse for Adam and Eve. In this survey of modern exiles, their yearning to go back to the Garden afflicts them with the same intensity.

Brook Wilensky-Lanford, intrigued by rumors that her great-uncle may have hunted for the site of paradise, begins her own quest. After a prologue introduces the ancient and medieval theorists and the early explorers whose journeys were fantastic or textual rather than real, she examines 14 examples of modern professors, prophets, and adventurers who asserted their own territorial claims upon the physical proof for our culture’s most enduring origin myth.

The first two chapters, full of detail, move slowly. They remind the reader of dusty monographs full of meticulously annotated arguments between experts long discredited and ignored. Still, the eccentricities of William Warren, first president of Boston University, who sought Eden at none other than the North Pole with its “hyperborean Eocene Man,” and then Friedrich Delitzsch, whose professor father renounced Judaism for a dogged Lutheranism which for his son became an Aryan defense of the last Kaiser’s imperial ambitions in Mesopotamia, certainly make for an off-beat contrast. The tensions between biblical criticism and traditional beliefs, which both academics attempted to ease as they wrangled over the location of Eden, make for a dramatic case study in what foibles even the most learned professors of the early 20th century might advance if in the interests of dubious archeology and dangerous antiSemitism.

Reverend Landon West began that century by popularizing a Native American Serpent Mound in Ohio as the site where the snake tempted Eve. The difference was that the original natives were drowned in the Flood, and the Indians who repopulated the continent had no connection to the primordial pair who produced America’s earliest settlers. Most did not take this German Baptist seriously.

More successful were those scholars who tried to use, as Delitzsch’s Assyriology had enabled biblical students in Germany, the emerging scholarship on what the cuneiform tablets unearthed revealed about ur-texts that predated by a millennium the book of Genesis. Oxford academic Archibald Henry Sayce figured that scripture could be proven by not its divergence from the earlier evidence (as his colleague and rival Delitzsch found himself entangled within) but for its direct continuity with Babylonian sources. Sayce reasoned that Moses revised pagan accounts to match the morality of the new Hebraic codes.

Over in Hong Kong, in 1914, Tse Tsan Tai stayed up one night to draft his short pamphlet that solved the problem that confounded Western scholars. The location of the Garden of Eden rested in Chinese Turkestan. Noah equals Nü Wa in the ancient epics of Tse’s homeland. The vast inland sea of Central Asia once flowed with water after the deluge, which wiped out Eden.

Irrigation engineer William Willcocks also sought an actual Eden, but one recoverable by his imperial efforts to reclaim the deserts to make them fertile again. Willcocks tried to match the Mesopotamian landscape with the biblical topography. Sayce pinpointed an Eden in the marshlands of what is now Iraq; Willcocks tracked a “Garden of Eden of the Semites” to an area farther north, so he labeled his competing countryman’s site the “Garden of Eden of Sumer.” He compromised that the “Sons of God” set their monotheistic, proto-Judaic site in one place. Then, Willcocks relegated the polytheistic Sumerians to Sayce’s other realm.

World Wars interfered but also strengthened similar suppositions, for the British remained engaged within this oil-rich region. Qurna at the junction of the Tigris and the Euphrates promoted the original Tree of Knowledge. In 1946, the Times of London reported on that the tree “has withered and died.” However, it then added: “Doubtless concerned for the continuity of knowledge, the enterprising local authorities have planted a new one.”

Across the globe, Wilensky-Lanford explains that by mid-century, such efforts to link the present-day land to antediluvian evidence faded as the Scopes “monkey trial” drove creationists and biblical literalists into their own retreat. American media mocked fundamentalists, as science swayed most within an increasingly secular constituency. Amateurs replaced professors, and professionals surrendered the search for Eden to adventurers and those on the fringe.

Yet even those in the rationalist mainstream might be lured into this quest. William and Lana Sadler, two Chicago doctors and leading progressives, became believers. They led a group that in 1924 began The Urantia Book, which they transcribed as dictated from a higher power, full of a complicated edenic if alien storyline that made the puzzles left by Genesis seem simplistic.

Down in remote Northern Florida, Elvy Edison Calloway represented the revenge of the fundamentalists. In 1956, he re-created the site of Eden as a libertarian, anti-New Deal, fiercely anti-Communist, yet pro-feminist park in an unwitting revival of Landon West’s Ohio attraction. Calloway tolerated more progress than West, but the two Baptists agreed on a retreat from the “spiritual confusion” that modern life and values popularized as biblical verities fought for a comeback.

Thor Heyerdahl’s fame came with Kon-Tiki after World War Two, one of his many attempts to travel back to beginnings. He decided to start at Qurna, and to retrace backward the ancient exodus that had led Sumerians out of Africa, first from Egypt to the Indus Valley in today’s Pakistan and then to Mesopotamia. His reed ship Tigris in 1977 set sail, meeting Cold War snafus, polluted waters, and despite a series of mishaps, some pioneering assumptions that anthropologists entertain about the interconnectedness of these early civilizations.

The book’s final section enlivens the tale; finally Wilensky-Lanford starts her own journey. Her visit to a redoubt in Northern Kentucky, the Creation Museum, represents the return of literalism to American classrooms and pulpits. Creationism attempts to reconcile science with the Bible, and the author provides a thoughtful consideration of a view that challenges her own skepticism. Touring the exhibits of Eden in chronological order, she marvels at their lifelike qualities. “In the first scene, a dark-haired Caucasian Adam named the animals. He reached one hand forward toward a deer and an elk. In the crook of his arm he held a tiny lamb, both symbolizing Christ and conveniently covering his private parts. At this point of course Adam was still naked and unashamed, but the viewers were not.”

Yet the location of Eden, amidst the determinedly detailed “evidence” amassed at the museum, itself remains for modern literalists a mystery. Noah’s flood erased its traces. For fundamentalists now, earlier adventurers recede along with their diligent theories. The bible, for once, does not offer literalists a clear answer about where the Garden existed.

After a chapter investigating another religious version of a place now vanished, the Mormon ties to Northern Missouri as Joseph Smith’s Eden and Zion once upon a time, the book explains new ideas from archeologists who attempt to match cultural shifts from hunter-gatherer nomads to agriculturalists ten thousand years ago with the recorded traces, “likely residual stories” from memories passed down perhaps seven thousand years before writing arrived in Egypt and Sumer. These became the Middle Eastern stories that the Bible then preserved and adapted.

Juris Zarins supposes that the first farmers were driven off by rising floods around 5,000 BCE. The angry Arabian nomads might have harried their Mesopotamian farming rivals. This clash might have led in a primitive logic to divine retribution for farmers who had tried to use what they gleaned from a Tree of Knowledge to plant and sow, to usurp the role of the divine. This story of exile and guilt could enter into Sumerian myth as the agriculturalists, blamed for their transgressions against nature and the gods, fled the flooding of their homeland and their gardens.

While other scholars argue, inevitably, against Zarins, Wilensky-Langford accepts this as part of the process, for nobody can dig up a garden that has vanished. Eden’s dream fades, theories are debunked, but new ones sprout as this most original of stories remains timeless. Visiting Qurna after the latest war, she finds this Iraqi city replacing the withered stumps of its tree with olive saplings, one named Eve: “it still had vibrant, real, green leaves.”