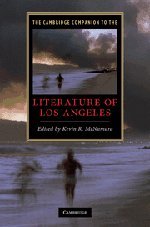 Not long after the City of the Queen of the Angels was founded, its many newcomers and its few natives lamented its decline. “The Anglo ‘invention’ of Los Angeles required a narrative of paradise lost as well as found.”

William Alexander McClung’s summation echoes over the fifteen essays compiled here. Various critics agree. The myth of L.A. as a palm-shaded resort dissolves into a mirage of resigned disappointment more often than a desert-adjacent oasis where dreams come true.

Kevin R. McNamara introduces the common themes of desire and delusion that comprise the literary reactions to this coastal megalopolis, this arid sprawl, and this cosmopolitan confusion where no driver agrees upon how far Los Angeles spreads into the interior from its Pacific proximity. The difficulty with defining what is dully designated the “Southland” in media reports or the “L.A. Basin” in weather forecasts permeates the imaginary as well as real responses to its disturbingly potent allure.

Such a star-studded stage set was manufactured early on. Its fabled Mexican heritage with Ramona became a nineteenth-century commodity for gullible tourists and conniving boosters. Such utopian features of a citrus-blossomed, Spanish-style hacienda overshadowed those who spoke its fantasy script and kept its props stable. L.A.’s unreal glamour, as recorded by those visiting, clashes with those living here who fail to recognize the stereotypes. Often it takes an insider to note this dissonance.

David Wyatt on mid-century fiction and Patrick O’Donnell on postwar L.A. enliven their essays with personal accounts of growing up in this changing city, most of whose sections rarely gain attention. As David Wyatt asks: “Yet, who works”? Outside of Mildred Pierce, it appears that not many Angelenos do. Fiction trumped reality. Wyatt shows how Tinseltown versions of L.A. dominated the imagination as its writers—often turned screenwriters—churned out their own exposés. These, for over a century, have competed in the ways we view this city.

Many novelists taking on L.A. today follow suit: They expect to sell their stories (often about movies) for the movies. Chip Rhodes examines Hollywood fictions concerning this intertextuality; Mark Shiel surveys the Southland on screen. They explore the relationship between the older and the newer media. In a collection on literature of L.A., the lure of the story being distorted into a larger-than-life spectacle tugs against the fiction writer’s modest ambitions to get a tale simply published and read. As writers competed for attention, their ranks grew.

Charles Scruggs studies the African-American contribution. Walter Mosley’s Devil in a Blue Dress presents a familiar archetype. “The poorest man has a car in Los Angeles; he might not have a roof over his head but he has a car. And he knows where he’s going too.” But as Wanda Coleman shows in her story “Hamburgers,” a character who lives on fast food so he can keep up payments on an unaffordable set of wheels may not survive this pressure to hang on to his car—even if it must become his home. Kicked out after falling behind on his rent, he learns a hidden truth. “Los Angeles may promise the world, but the last thing it provides is spiritual nourishment.”

Postwar L.A., Mark Shiel explains, promoted films that confront the loss of open space and the squalor of stucco. Too many veterans and their families arrived to sniff the orange blossoms; these were chopped down for tract homes. Across a hundred miles of housing, “automobile use became unnervingly routine or compensatory for some sort of psychological lack.”

Film noir churned out angst; countercultural entertainment pumped up sex, drugs, and sun as hedonistic remedies for such anxiety. Science fiction countered this attitude as postwar writers and filmmakers reveled in catastrophes that leveled pleasure palaces. “The literature of urban rebellion” full of strikebreakers and then looters darkened distant hottub or surf-splashed vistas. Meanwhile, inner city or modest suburbs languished as rarely explored—at least rarely in the poems, novels, or films garnering a wider audience.

James Kyung-Jin Lee alerts readers to a city many outside of L.A. may not recognize, where a Redondo Beach fish market’s Latino workers speak in Korean to tourists from Seoul arriving at the pier not far from LAX airport. This multicultural city earns coverage in most essays, most likely by virtue of its scarcity from earlier texts as well as its later presence.

Yet, I noted a slight dissonance here. Essayists all use “Justice Riots” for the 1992 “uprising” following the Rodney King verdict. As a native of Los Angeles, who the night this “civil unrest” exploded had to evacuate my adult-school students from the South-Central campus where I taught, I never have heard “Justice Riots” used by my colleagues, my students, or anybody within earshot. This term may be favored by those in elite or progressive settings. However, “Justice” rather than “Rodney King” or “1992 riots” has never entered the vocabulary of the diverse Angelenos with whom I live, work, and socialize.

That being said, most contributors, in spite of their professorial status, manage to write efficient, readable prose that conveys a command of the essential books and films that cover their specialty. The Californios, British expatriates and German exiles, Asian and Latino interactions, sleuths, and nature all earn their own chapters. Sections often suffer from a compression that leans more toward plot summary rather than explications of key passages. (Charles Scruggs by examining Walter Mosley’s excerpts handles this coverage well).

Some entries nod too much toward the three surveyors whom anyone familiar with L.A. on the page already knows: Carey McWilliams, Joan Didion, and Mike Davis. Therefore, Eric Avila’s cautionary note about Davis’ influential (at least in elite or progressive settings) but binary, either/or emphasis was welcome. Davis views class war as the fundamental perspective. “For all of its insight or depth, City of Quartz proffers an analysis that remains bounded by the subjective limitations of a white-male Marxism that slights the salience of race in a deeply racialized metropolis.” Avila’s own chapter on essayists ends by glancing at complexity and nuance as necessary factors in judging this region.

Urbanists and critics, alongside novelists and screenwriters, tend to sell us what we expect from a too-familiar L.A. As exemplified by James Kyung-Jin Lee’s nimble juxtaposition of Asian-American and Latino encounters, may this volume encourage a more diverse, and more honest, reaction to the real Los Angeles that defies as often as it defines fictional responses on page and on screen.