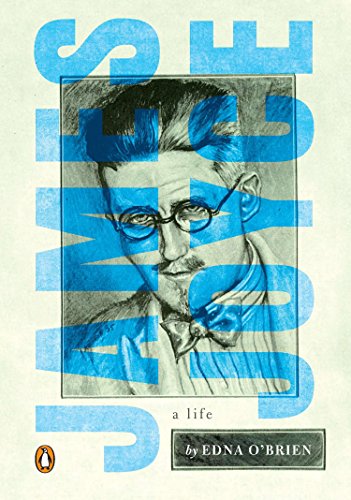 “. . . for a glimpse into James Joyce’s shadowed soul and his demanding mind as well as his labyrinthine texts, Ms. O’Brien gives us a welcome portal into how the books emerged from such a complex man.”

“Scalding” represents the most frequent adjective assigned to one Irish writer by another in this lively, deftly rendered short biography. Edna O’Brien, as one of many heirs to perhaps the past century’s greatest influence upon writers in and beyond Ireland, recognizes James Joyce’s power and his passion. She renders the terrifying clashes of ego with talent, jealousy with commitment that characterized his life. Feckless, vengeful, and petty, Joyce remained convinced of his genius and tried as nearly every writer does to convince others of his gift.

Unlike nearly every other writer, Joyce merited acclaim. For all his difficulties, he remains the epitome of experimentation allied with sympathy, dissection matched to compassion, wit coupled with enigmas.

Ms. O’Brien begins her account with a quick imitation of the start of A Portrait of the Artist as a Young Man, and while skillful, I feared that this biography would include many attempts to mimic or parody the master craftsman.

However, she soon matures, and immediately evokes the imprint of his parents on the very young man. “His mother and father had walked where he would walk as a young man, drifter and dreamer, who would in his fiction delineate each footstep, each bird call, each oval of sand wet or dry, the seaweed wet and olive, set them down in a mirage of language that was at once real and transubstantiating and would ever be known as Joyce’s Dublin.” He boasted that if his native city were destroyed, from his books it could be rebuilt.

Meanwhile, he gathered material in exile for his commemorations and excoriations of Ireland. Smarting from the criticisms of his former colleagues, he began to plot his retaliation; however, his fiction would surpass mere score-setting.

“Were his works to be only that, they would be temporal; his scroll is far deeper—he compassed body and soul, high and low, seemingly faithful to his secret conviction that literature is, in its essence, violence and desire.” Ms. O’Brien astutely compares him to Jacobean dramatist John Webster, adept at vengeance and triumph.

Joyce’s unsparing stories, collected as Dubliners, brought him much anguish in the scuffle over their impropriety. As a sympathetic writer, Ms. O’Brien explains this collection’s prepublication fracas well. Out of the 379 copies sold as of a year after its appearance, 120 were purchased by their impoverished author.

While she skims over their contents—as with all of his intricate works—this book remains valuable more for its ability to comment in accessible, energetic prose on Joyce’s mindset and his machinations. She admits: “Anyone who touched Joyce seemed to get a bit carried away and makes us cry out as Molly did: ‘O rocks! Tell us in plain words.’”

This short biography is suited for audiences already familiar with Joyce’s long books, so those who may wish a quicker summary of their creator than Richard Ellmann’s magisterial standard biography affords will find this a wise choice. One mark of Joyce’s pull on his reader is the urge, or necessity, that his works spark: one cannot read them for long free of commentary or guidance.

Ms. O’Brien retells the core plot of Ulysses wonderfully in a few pages, all the same. While she seems to stumble slightly in the next section, which conflates awkwardly the “Sirens” and “Nausicaa” chapters with the American obscenity trial of the book, most of these pages pack observations with summations neatly. She avoids in-depth criticism, regarding it as futile.

We see instead the author, nearing fame or infamy in Paris after his blue-and-white volume finds patrons, press, and buyers, still in a flat with a daughter growing mad, a son doomed to do his father’s whim to promote his talent, and a wife grown harried and weary of her imperious husband, who never stopped lording himself over his family, his friends, and the world. Within such internal occlusion, as he fought blindness, he began his phantasmagorical trip into the nighttime psyche, the linguistic wordplay of Finnegans Wake. “His exile was so complete within himself that interruption could not endanger it, only time could do that,” she opines.

Must writers be monsters to create? Ms. O’Brien thinks so, at least if they are of Joyce’s stature. “It is a paradox that wrestling with language to capture the human condition they become more callous, and cut off from the very human traits which they so glisteningly depict.”

As people receded into remoteness around his dimming vision, he retreated into the Wake’s words. His Parisian seclusion at least was secured by Nora’s ministrations. Unlike many writers, Joyce suffered his physical and mental pain with friends and family, who while they may have resented the burden he caused them, nonetheless felt compelled or resigned to support him.

He staked all on his texts, and he won at the cost of his health, his sight, and his life. The mad labor of five proof texts of his unwieldy, but greatest, novel, the endless revisions over which he bent with bleary eyes left him with a tenth of his vision. Twenty thousand hours of preparing Ulysses over seven years in poverty led to his worldwide renown, as well as his tragic cruelty toward his reckless father, his long-manipulated brother Stanislaus, and the neglect of his mother.

His daughter failed to respond to even the treatments of Carl Jung, while his son faced the legacy of a father he himself could never live up to. His wife could not understand his books, and he wore himself out in disputes with enemies—some real but more often imagined—against whom he needed to rail as part of his complicated inner reality—one that even a wise biographer cannot fully enter.

Still, for a glimpse into James Joyce’s shadowed soul and his demanding mind as well as his labyrinthine texts, Ms. O’Brien gives us a welcome portal into how the books emerged from such a complex man.