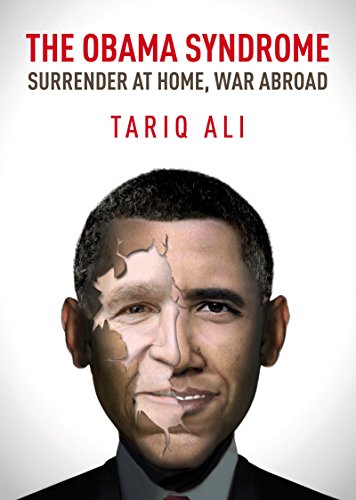 Editor of New Left Review, London-based Ali criticizes Barack Obama’s obedience to the same corporate and military powers that controlled previous American administrations. What Ali sums up about a previous analysis of Obama speaks for Ali’s own agenda: “A useful antidote to the gushing biographies.” Ali’s progressive stance confronts the illusions sold to voters in 2008 by a compliant media and capitalist firms who provided the vast majority of Obama’s $900 million campaign funds. Goldman Sachs contributed nearly a million; who could claim surprise by their bailout?

His leftist presuppositions infuse this short series of what read more like related essays than a seamlessly constructed narrative. Ali admits a rush to print, preferring to provide a “preliminary report on the first 1000 days of the Obama presidency.” However, with mention of the Gaza flotilla attack by Israel, the resignation of General McChrystal, and the BP oil spill, this is as current an overview as can be expected.

It begins energetically. The first “mixed-race” president reinvented himself as both white enough and black enough to win. His sloganeering and bumper stickers and blogging cheerleaders promoted a cleverly marketed idealist rather than a savvy, aloof, slick product of the Chicago political machine. “Little of what Obama actually said in a combination of blandishments, special pleading and specious arguments justified much optimism, but the manner of his speaking, the color of his skin and the constant invocation of the word ‘change’ helped create a new spirit in the country—Obamania—that propelled him to the White House.”

Ali cites African American scholars and activists among Obama’s critics, noting how even among a few of those from his most loyal constituency, Obama’s opportunism soured his appeal. “The emblematic significance of Obama’s victory should not be underestimated, but did it ever move beyond symbols?” Ali doubts it did. After surveying the superficial gloss of Obama’s campaign makeover, he turns to Obama’s imperial aspirations, which extend those of his predecessors.

Surveying Iraqi and Afghani wars, Palestinian resistance, and Iranian and Pakistani dangers supposed by an Anglo-American military and multinational hegemony, Ali amasses more information akin to a current affairs journalist’s approach than that of a political analyst. The facts weigh this section down. From this point, he stacks up information with less panache and more duty in the service of a leftist rejection of Obama’s empire building policies.

Still, data remind us of worthwhile knowledge. For example, Ali cites a CIA document advising promotion in Western Europe media about the plight of oppressed Afghan women, to overcome widespread rejection by liberal women of Allied support for military incursions into Afghanistan. The U.S. military airport at Balad in Iraq is second only to Heathrow in air traffic. The U.S. embassy in Iraq equals the Vatican City in size. These lucrative infrastructures, it may be predicted, will not fade away soon whatever the celebrations of a “drawdown” of troops from that war-weary nation.

The author investigates other motives that reveal American domination overseas. For Ali, an American call for Iran not to have nuclear weapons rings hollow as it is “ringed by atomic states—India, Pakistan, China, Russia, Israel—and American nuclear submarines patrol its southern coast.” Iran fears outside threats, so Ali insists that as long as Israel possesses “200 nuclear bombs” backed by U.S. might, that any moral stance Iran’s enemies may claim defies their pretense for nuclear disarmament and a Non-Proliferation Treaty.

This leftist reaction, in other contexts, typifies Ali’s characteristic limitations. His progressive opposition leaves the reader wondering--in a world where no other superpower appears ready to take over America’s role as carrier of the big stick--what viable alternatives might be. Ali barely mentions China and Russia, both of whom appear weak internally and crippled by poverty even as their wealthy enjoy luxuries rivaling those of Western comrades. Western Europe’s own affluence has not made it eager to step in as a leader worldwide. The economic crisis currently rattling most developed nations needed more long-term perspectives than the recapitulations piled up and shuffled past here. How can it presage a more just global system?

As a weak response to such a crisis, Obama’s “sonorous banality and armor-plated hypocrisy” earn derision. Ali exposes Obama’s habitual lack of will. Rather than true reform for Wall Street, the healthcare system, or the Supreme Court, Obama capitulates to lobbyists and fundraisers who control politicians under a Democratic or Republican administration. He cannot control them anymore than the Bushes, Reagan, or Clinton were willing to do. Obama pretends that an audacity of hope leading to genuine advance will occur under his watch, but the “implication is always that the Washington system prevents any change that he could believe in.”

Ali notes that the New Deal and the Civil Rights Act “were the results of action from below,” as opposed to the top-down, capitalist regulation of democracy that defines today’s Western system. He shows how even if more female or darker-tinged faces enter the ranks of the affluent, that the fundamental inequalities of the capitalist system perpetuate themselves. The wealth will not redistribute itself even if its beneficiaries become more diverse. Nevertheless, the last half of his short book fails to register what has been shouted by many of those recently protesting “from below.” Ali proves hard of hearing when these less radically sanctioned voices clash with his own suppositions about what is right—as expected from the left—for America.

He berates the rise of privatized charter schools often funded by corporations. But Ali fails to explain how grassroots protests within urban communities confronting low literacy, high immigration (an issue Ali never addresses), and the failure of both parents and teachers (backed by intransigent unions whose role is also ignored), have led to such a compromised policy. This desperate turn of frustrated parents to corporations for another kind of bailout crosses class lines; it does not jibe with leftist prescriptions for union-led identity politics pieties rather than newly configured remedies to a broken educational bureaucracy.

The role that community activists, on the other hand, played in pressuring the second Bush administration to ease sub-prime mortgage qualifications to widen access to poor and minority urban applicants, a key cause for the 2008 financial meltdown, receives no mention. The impact of immigration, legal and illegal, on job losses, imploding budgets, and wage deflation is not included. Globalization as financed by a U.S. corporate-government alliance—as this complicates easy summations of what a leftist approves as a populist reaction—earns minimal attention.

Ali’s mocks Michelle Obama’s efforts to urge individual responsibility rather than to attack the fast-food industry. This peddles processed junk to schoolchildren, especially among urban and minority populations. In his earnest critique, Ali resists blaming the victim. Michelle Obama does kowtow to agribusiness, but nobody forces families at home, no matter how impoverished, to consume harmful food. As with many leftists, he offers few ideas for how to overcome the status quo. He suggests that Cuba sell medicine to Americans alongside Canada. He opposes militarism, profiteering, and cronyism. But deeper solutions to endemic injustice elude him. How the U.S., with its internal malaise worsened by crippling debt to China, will prolong its military reach and its global grasp, oddly, receives no in-depth analysis here.

One might argue that the Obama syndrome, no matter who inherits this affliction, may collapse as the parasite consumes the host. How can capitalism sustain itself in this self-devouring, environmentally threatened, and profit-driven world? Closing this collection, rather than appending an article on the failed Oakland health care system or the situation in Yemen, Ali could have addressed this dire scenario instead. One wonders about his solutions, two decades after the collapse of mass capitalist opposition, from his perspective in a London-based far-left.

Ali might have enriched this study. He could have articulated more often the fears and hopes of communities, grassroots organizations, and everyday folks who are entangled within their historical allegiance to Obama’s own maker, the Democratic party machine. It dominates many cities and suburbs. No true radicals will get elected, even there. Few residents bother with whatever New Left Review encourages, when it comes to a disaffected American voter, or a non-voter majority. This lack of electoral choice prevents real change from occurring in a polarized, bipartisan, corporate-funded, unreformed campaigning system. The Democratic party’s “leadership” will not support any more than the GOP a truly alternative candidate—no matter what his or her complexion—when it comes to perpetuating its own empire.