On an Irish Island 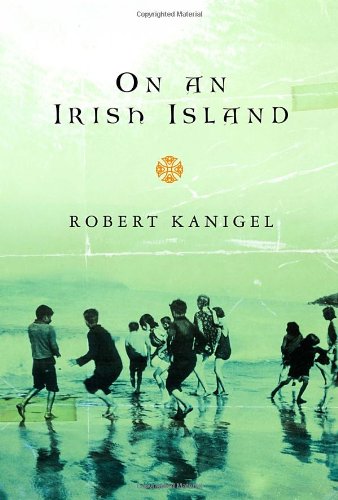 “Robert Kanigel knits together a handsome pattern as he traces the inherent drama within the destinies on the page—and in recollection by themselves and others—of the Blasket Islanders. In their encounters with European intellectuals, this narrative provides an unexpected combination of characters, all treated with dignity and sensitivity.”

A rowboat away, southwest of the westernmost tip of Ireland, the Blasket Islands seemed to come from a time 500 years ago to those who visited them starting nearly a century ago, or those who read memoirs and accounts written by its natives. These authors, in turn, did not all know even how to read and write in their Irish-language dialect. Yet they found an international audience through a motley set of mediators, mostly in their twenties, who traveled to the islands after learning Irish themselves.

In 2005 Robert Kanigel, a science writer retired from M.I.T., visited the interpretative center set up to explain the legacy of the islanders. On his honeymoon, he got into his first “tiff” with his wife, after he could not tear himself away from the bookstore stocked with works by the Great Blasket Island’s writers. Unsurprisingly, he winds up explaining to us the meeting of European scholars and unschooled fisher-folk, recorded by sophisticated archivists and shrewd islanders in a rare convergence of intellects.

George Thomson, a Cambridge classicist (and later a leader in the British Communist Party), began the popularization of the Blaskets. He wanted to learn modern Irish, and his friendship with Tomás Ó Criomhthain leads to the publication of Island Cross-Talk and The Islandman.

These accounts, the latter a Book-of-the-Month Club selection in 1933, generated mixed reviews. Some then, as with certain critics today, reacted negatively to the manipulation of romantic themes that minimized the repetitive storms and drownings of real island life. Others lauded the “simple, lilting pages” and enjoyed such exuberant pastoralism.

Mr. Kanigel sides with the editors and translators who crafted the storytelling talents of Ó Criomhthain as acceptable compromises to heighten the power of his tales. Robin Flower from the British Museum and Carl Marstrander from Norway join those attracted to what appeared a last bastion of spoken Irish and primitive ways on Europe’s last frontier. Brian Kelly, another mediator, gains a less documented and more shadowy presence as he works with Ó Criomhthain; Marie-Louise Sjoestedt, a brilliant Parisian linguist, brings deft skills to her own work with a raconteur, “Seán a Chota,” in what may, as Mr. Kanigel suggests, have been an infatuation hatched out of opportunism, or a series of miscues about compatibility.

Similarly, Thomson’s own attempt to woo a local girl—he 23 and an atheist academic set on doctoral studies in Greek at Cambridge, she 15 with a big smile—appears fated for failure. Mary Kearney left the island, first for domestic service in the shadow of Ireland’s premier seminary, and then for Springfield, Massachusetts, where she soon entered the convent.

The mismatch between trained scholars and blunt fishing families challenges both sides. The language barriers, as Mr. Kanigel sums up well, daunt even skilled linguists. Add the shock of leaving Oxford or Paris to land on a barren, treeless rock so difficult to get to that a priest was rowed over but once a year, and the culture clash intensifies.

Mr. Kanigel interweaves the perspectives of Thomson or Sjoestedt intricately into how they approached the islanders. Alternatively, via Maurice O’Sullivan--who while a policeman stationed unhappily among Irish-speakers in Connemara wrote what in English Thomson translated as Twenty Years a-Growing—Mr. Kanigel shifts to allow us to see 1920s Dublin through the eyes of the newly arrived O’Sullivan.

Emigration by the 1930s accelerated, even as eager readers found more books to read by islanders documenting their now vanishing folkways and dialect. After the success of The Islandman and Twenty Years in 1933, the reminiscences of Peig Sayers appeared from a woman who had married into the island but who could neither read nor write in Irish. In the pages of Peig, generations on the Irish mainland labored to learn an “official” national tongue foreign to nearly all schoolchildren. Three works had found success, produced from a community of about 150. More studies and accounts followed, and fame came to Great Blasket.

Yet a blip of tourism ended with the privations of WWII, and the economy dwindled along with the numbers able to survive in a harsh if sometimes enchanting place. Marriage partners dwindled, and the school taught fewer children. By 1953, the last islanders were evacuated by the Irish government.

Mr. Kanigel draws upon the research of nearly 100 years. Assisted in relevant Irish-language materials by his own mediators, he admits collaboration of his own. The results for a wider audience rest on a command of the sources and an understanding of the complexity in translating and rendering one worldview into another aimed at mass consumption.

As a professor of science writing, Mr. Kanigel is to be commended for working outside of his natural expertise. He knits together a handsome pattern as he traces the inherent drama within the destinies on the page--and in recollection by themselves and others—of the Blasket Islanders. In their encounters with European intellectuals, this narrative provides an unexpected combination of characters, all treated with dignity and sensitivity.

Concluding with the aftermath of the Blasket encounter upon its interpreters, both schooled and untutored, this history shows how the impact of the island, whether savored in summer by visitors or endured all year by natives, affected the rest of their lives after nobody was left to hunt rabbits or catch mackerel.

Mr. Kanigel compares the setting to the legendary Land of Youth, where writers and mediators combined to capture the essence of their transformed vision of a place. He knows both its allure and the dangers of distortion, but after all, this is the making of a legend as much as it is the chronicling of fact. The mundane makes magic.

Mr. Kanigel reminds us of our own longings for a respite from the pressures of civilization and mechanization; all involved in this Blasket saga appear, later in life off the island, to regret to a small or great degree their exile.

On an Irish Island efficiently conveys the feel of living in such a place, and the excitement of the intellectuals who lay claim to having found what Thomson marveled over.

Of the 15 or so books from those who grew up or conducted research on the Blaskets, the results were unequalled in any language, “a collective portrait of a precapitalist village society made by the villagers themselves at the very moment of transition from speech to print.”

This Cambridge scholar’s praise for what—when he voyaged there—was a place and a culture still largely cut off from the early 20th century—turns poignant, as the Co. Kerry interpretative center faces the depopulated Blaskets across three miles of rough, choppy sea.