The Mark and the Void: A Novel 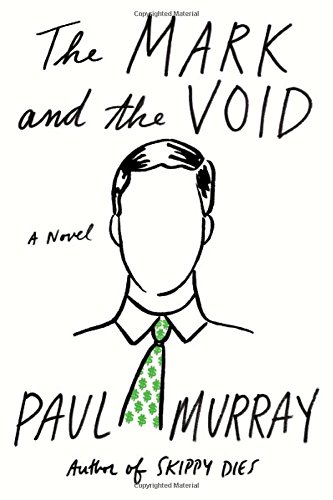 “reminds audiences of the human costs beneath the rise to fortune of a few manipulators of our money.”

An Irish novelist, Paul, has an offer for Claude Martingale, a French research analyst working for a Dublin investment bank. Why not feature in his next book, depicting, a century after Ulysses, a citizen's everyday life? After all, Paul reasons, the "humanity in the machine" exists in such offices and towers, and "we're all being narrated" within not the printed page, but on screens by our media.

So begins Paul Murray's The Mark and the Void. His third novel continues the quirks of An Evening of Long Goodbyes (2003) and the experiments of Skippy Dies (2010). The entrance of an author into his creation is not new. Fans of the film Adaptation, or the satire At Swim-Two-Birds by Flann O'Brien, will recognize tropes as the inventor finds himself outwitted by those who resist his machinations. To keep such a tale convincing, a writer must convince us of his control over his satire.

Whether this works or not for The Mark and the Void challenges the reader. Paul through Claude and his colleagues at the Bank of Torabundo tries to capture the "narrow minds and broad hearts" of today's Dubliners, often immigrants to a city they make over and live within as if any other. Stripped of much of the local color that enlivened Joyce's epic, Murray's city has had its Monto "Nighttown" red-light quarter overshadowed and obliterated by the high rise mercantile powers and corporate multinationals. This context, after the collapse of the Celtic Tiger boom and during the austerity cuts imposed upon Greece and Ireland, darkens the sheen of those symbols of capitalism and speculation.

Complicit in these schemes, Torabundo's employees transform. They realize that business' true purpose aims "to replace the shifting, medieval labyrinths of love with the broad, sanitized avenues of materialism," rational reordering of the "lightless, involuted city of the self." Leopold's Bloom finds his concerns outmoded.

Paul's Claude hears his calculating author argue for a shift to the web. There, the novel will be replaced "to preserve the illusion," where one can fall in love, and stay in a story forever. Paul tries to entice Claude into investing not in his next novel, but in a novel invention. Myhotswaitress.com attempts to provide a lonely searcher with a way to follow the waitress of his choice, by surveillance and by catering to his dalliances, discreetly and at a safe, tempting, distance.

A spin off of Cyrano de Bergerac's courting through another voice enters this narration. But Paul Murray appears as restless as his own stand-in, Paul. The Mark and the Void tries to take on the ethics of the gift economy, the plight of Dublin's poor as "zombies" haunting the banks who did them in, and how prostitution has morphed between Joyce's time and ours into servicing the rich and the greedy.

Next to the Famine memorial by the river Liffey, paid for by wealthy sponsors, this novel reminds us that the banks still loom high. There, "the night sky is reflected and intensified in the louring windows of the corporate towers, as though they were mining darkness for the air, storing it within them." This passage demonstrates the force of Murray's prose, as it dissects Dublin's dire vista.

Havoc ensues late on. But the depiction of the River Liffey about to overspill those concrete banks, under the stolid gaze of the banks above, fails to convince, and Murray keeps piling on the intricacies of banking that lack a punch on the page. Claude and Paul want the Irish to succeed, but will they?

Near the end, a German colleague opines that given the clerical domination of Ireland for so long, the natives "already believe they are born in debt, a terrible sin, which they can never pay in full. A people like this is more comfortable wrapped in chains."

The value of Murray's novel lies in the unsparing gaze he casts, through his alter ego Paul and through his narrator Claude, into the frail shell surrounding the glitz and the shimmer of Dublin. While it rambles and spins about in a manner not unfamiliar to readers of such self-referential and many-layered narratives, The Mark and the Void reminds audiences of the human costs beneath the rise to fortune of a few manipulators of our money.