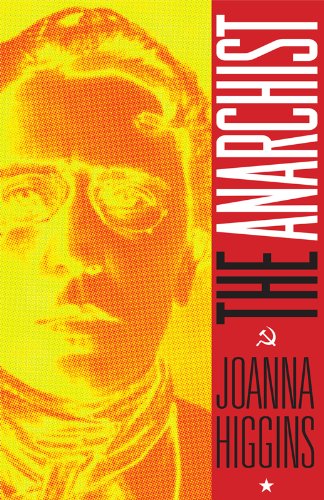 “The Anarchist enlivens a violent, edgy period not so far away from the assassination of William McKinley by a deranged, misguided, idealist immigrants’ son . . .”

Reviewing this on May Day, the international workers’ celebration less heralded now, the relevance of this historical novel dramatizing Emma Goldman, “The Major” President William McKinley, and his assassin Leon Czolgosz remains vibrant.

Joanna Higgins imagines the inner monologues of these three main characters, along with a few of their family members and associates, to illustrate century-old struggles for social change and political reform. By dramatizing the tension between Leon, who advocates violence, and Emma, who sympathizes with it while not condoning it, Higgins explores the challenge faced by radicals bent on overturning the system that McKinley and the American way of life represent, which determines to wipe out dissent and defeat its rebels.

When the events, elaborated from the archives and books Higgins credits, are a foregone conclusion from a hundred years ago, the challenge for a novelist rises. How does she draw the reader in, given “The Major” McKinley’s assassination, Leon’s execution, and Emma’s release and eventual ill-fated stint in the new Soviet state are the results?

Higgins shifts perspectives to keep us off-guard. Gradually, the reader perceives how a few outliers try to rouse people into revolt against injustice, and how the protesters fare when a purported justice system attempts to encourage law and order while sustaining capitalism’s power.

How she manages to do this without siding with one proponent or another, allowing sympathies to move between characters, makes this not a contest of rabble-rousing activists against fat-cat affluence but a depiction of human frailty, as anarchic ideals contend against democratic aspirations and economic gain.

Higgins begins with the formative influences on both Leon and Emma within the Polish Catholic and Russian Jewish great emigrations. The author depicts their hard labor and their simmering resentment as they contribute to profits rewarding the Carnegies far more than foundry workers. The Haymarket bombing during a Chicago march reveals, from Higgins’ vantage, class divide.

We watch the event first through the mayor. He observes and identifies particular protesters before a deadly explosion shatters the street. Then we hear a young Emma asserting after she has read the militant newspaper that radicalizes her, that some of those named as setting off the terrorism were nowhere near the protest.

This nuanced approach suits the novel well. One of freethinking Emma’s many lovers (this can get confusing, for a slight flaw is Higgins’ attenuated manner of introducing a few), and the most famous, Alexander “Sasha” Berkman, does not gain the prominence which may be assumed given the jacket copy. He spent most of the time of this novel imprisoned for a botched murder of Carnegie’s trusted industrialist, Henry Clay Frick, who had championed the Homestead steel mill against a bitter strike.

Settling that strike, an Irish-American named Eamon wanders in as a Pinkerton security guard, who understands nothing of what he has been hired for. Higgins, whose previous novels include an award-winning Civil War account, excels in the fiery riverside clash that follows, and she brings the uneasy showdown between strikers and goons vividly alive.

In the aftermath, a recuperating Eamon is taken in by “The Major” on a hospital visit to the surviving Pinkerton recruit. In turn, he is informally adopted by him, and he grows to serve the President as a valet in the White House. Elaborating this character, Ms. Higgins provides a smart narrative to connect immigration, radicalism, and the threat against the establishment to the situation around 1900 in the country.

Some slow spots follow, as we find parts of Congressional debates included, and Ida, Mrs. McKinley, slows the pace down in a necessary fashion perhaps to show what more than one character will share, the breakdown of the body and the mind. This will soon affect the president after another botched act of violence.

Leon has met the lecturing revolutionary Emma after her cause elevates her to some fame and more infamy. (The book’s cover hints at her nickname “Red Emma” but her dislike of communism overwhelmed her advocacy, arguably well before her own Soviet residency soured; the inclusion of a small hammer-and-sickle and the dominance of red in the book’s design plays up rather than down this association, which dogs her despite her lifelong articulation of anarchism: this distinction must be kept in mind by modern readers who may confuse two diverging philosophies. On the other hand, anarchism at this time lacked its own icon as readily polarizing or as identifiable as that later spray painted by punks.)

He goes to Buffalo’s Pan-American Exposition after his brief encounter with Emma starts to unsettle him. His mental control lapses, and the summer of 1901 becomes eerie in the heat for him.

Waiting in a receiving line at the fair, he shoots McKinley. His demise, although rather rapid due to gangrene setting into the poorly treated bullet wounds, feels drawn out for much longer than the historical record, but Higgins uses this chronology appropriately to convey the distortions felt within as McKinley and Leon suffer, as Ida too had broken down. This pain separates each, oddly triangulated, but they are linked by the target of the assassin, and then the true anarchist, Emma Goldman, who in the wake of the shooting will be incarcerated. Leon lets on she was his inspiration. So it does not take long before parallels to future cases of police and media frenzy appear, in a search for a fatal conspiracy linked to foreign bodies within the ailing body politic.

Higgins lets this congruence emerge naturally. We understand the repetition of this, as we do another within a McKinley administration taking on an uneasy imperial obligation as it seeks to liberate the Philippines from first Spain and then its own ungrateful insurgents.

The lessons to be learned endure, but on their own.

This distancing works to the novel’s favor.  The later chapters accelerate, as the death of McKinley and the execution of Leon both are rendered effectively personal. The politics recedes and the reader views both men as victims of their mental or emotional needs to be driven on by their careers, oddly juxtaposed as they are, and this necessity compels them as it does Emma.

When the journalist Nellie Bly, in one of the novel’s best scenes, visits her in jail for a scoop, the familiar manner in which the press treats those elevated to notoriety to tell their side of the story--as if in its telling tabloid truth can somehow avoid its implication in commerce, gossip, and abetting the system itself that selling depends upon—gains its own place in the spotlight. Ms. Higgins explores the debate between not advocating violence while expressing sympathy for the sensitive misfits who turn to it, as Emma defends, with the rebuttal by Bly that this distinction cannot be sustained within a democratic society that seeks to advance equality peacefully.

Whether those who labor on the Lower East Side in its factories and tenements, Emma suggests and Higgins avers, share this lofty confidence in progress, remains doubtful. Yet, the author lets each crusader articulate her position.

In the end, after a president and an assassin die, Emma is left with the pursuit of more love, as well as less fame. Her reputation sends her underground under a false name as a dressmaker, and as her previous time running a lunchroom illustrates, she determined to raise consciousness and suggest alternatives, to one person at a time.

From the common worker’s ranks, the self-taught, ill-tempered, bold Emma continued to make mistakes, doubt her own resolution, and claw her way forward against enormous opposition. Basing this fiction on the adventurous facts of her life and those with whom she associated or opposed, The Anarchist enlivens a violent, edgy period not so far away from the assassination of William McKinley by a deranged, misguided idealist’s immigrant’s son, after all.