The Worlds of J. R. R. Tolkien: The Places That Inspired Middle-earth 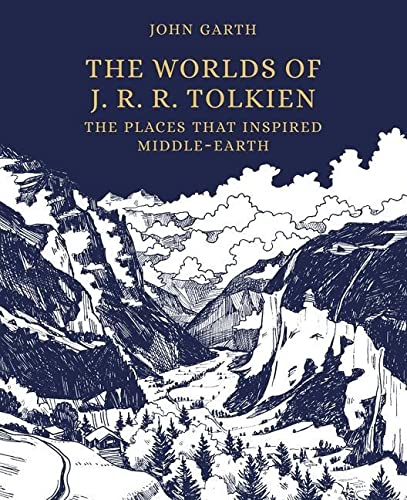 “Whether new to Middle-Earth or a veteran pilgrim, anyone will learn much in this book.”

Atlases of Middle-Earth, guides and art, tributes and monographs, films and “cosplay” proliferate. What John Garth adds to the ever-proliferating pile of Tolkien-related media is a careful eye and steady step. He explores the intersections between this world and that of Tolkien’s “legendarium.” He traces inspirations from what the author saw, and how they may likely have evolved into what can be gleaned from his tales, letters, drafts, and sketches. While not all made it into the published product, the effort Garth demonstrates attests to Tolkien’s visionary projection, his uncanny talent at what this scholar compares to a paint-box, in which the author dipped, daubed, and mixed layers of color, depth, hue, form, and drama into his vast legacy of narratives.

To begin, Garth logically starts with the hobbits’ Shire. Tracking parallels to childhood scenes in the village of Sarehole near Birmingham, Garth shows how Tolkien grew up amidst an almost-vanished rural setting. He then broadens the scope, viewing the “people, languages and cosmology” of Tolkien’s panorama, already emerging in his youthful imagination. It soon encompasses England itself, transformed into Lúthien, a name with lasting resonance, for it graces Tolkien’s tombstone. Topography expands abroad, with chapters devoted to features such as shores and seas, inland waters, mountains, forests, battlefields, and industrial wastelands. All are “places built or shaped by people,” Garth notes, and by Tolkien’s incessant cultivation of fussy details as a “natural niggler” whose seeding as a medievalist and linguist bore abundant fruit.

Garth reminds readers that what Tolkien began over a century ago described races and places as seen by medieval poets and chroniclers, not necessarily as they actually were. This astute caution defends the author’s works against detractors who, looking back and projecting contemporary critical theory upon Middle-Earth, distort its perspective.

What opens up to the viewer dazzles. Drowned lands, moving islands, and sea-caves first appear as Garth follows Tolkien’s explorations of the real and the fictional, and their blur and blend. Mountains loom, for Tolkien’s 1911 walking tour of the Swiss valley of Lauterbrunnen offered a “superfluity of inspiration,” in Garth’s estimation.

Peaks of fire, ice, and mist echo, as do Tolkien’s analysis incorporating volcanoes, geology, subterranean architecture, and craggy formations. Again, the 1911 travels had taken him two days down the Rhine towards the Alps. Germanic lore of dragon lairs and Wagner’s Ring-cycle leave imprints in his works. Rivers, pools, marshes and floods connect one section of this book to the next on “tree-woven lands.” Clumps, clusters, and circles of woods Garth compares to Tolkien’s wonderfully drawn maps, varied vistas, and even medieval cathedrals which have enriched his subject’s imagination.

Philology, archeology, cartography entered too, for the castles surviving, burial mounds, barrows, chalk-figures, and the ruins excavated across England turned into the citadels, fortresses, halls, and towers which endure or topple as ancient attestations to bloodshed. They populated Tolkien’s landscapes. As Garth’s previous book documented Tolkien’s experiences in, and reactions to, the “Great War,” this scholar’s scrutiny of artifacts of stone and iron, conflagration into ash, diaries, letters, and jottings comprise a significant portion of this superbly illustrated new volume.

While other writers schooled in the Edwardian age focused on the phantasmagorical, Tolkien’s balance with the grim realities of combat tempered his treatment. Panoramic desolation sears his pages, as does telling detail, that for instance of dead faces after a slaughter, submerged in miasmas as glimpsed from above by weary, parched marchers.

Tolkien’s sensitivity toward the eradication of the environment that nurtured his soul permeates his creations. This mirrored the hidden damage within those who survived the global carnage. As Tolkien recovered in 1916 from “louse-borne trench fever,” in and out of hospitals, he strengthened the scaffolding of his narrative constructions.

Returning to England, Garth corrects Tolkien’s pioneering biographer Humphrey Carpenter’s assertion that Birmingham equated to the dark and despotic Mordor. Garth examines that city’s toy industry, and its buildings preserving the Gothic Revival and William Morris’ Arts and Crafts Movement of Victorian times. Yet Garth somberly acknowledges the “swallowing of Sarehole,” as Tolkien’s beloved hamlet succumbs to a suburban “sea of new red-brick,” in his phrase.

John Garth concludes by evoking Tolkien’s ideals of “community, peace, freedom, craft and intimacy with nature.” These virtues enriched both his fictional and factual domains where he passed his long life, and its results endure to “reflect what he most loved and detested in his own world.”

Whether new to Middle-Earth or a veteran pilgrim, anyone will learn much in this book.