Rebel Buddha: On the Road to Freedom 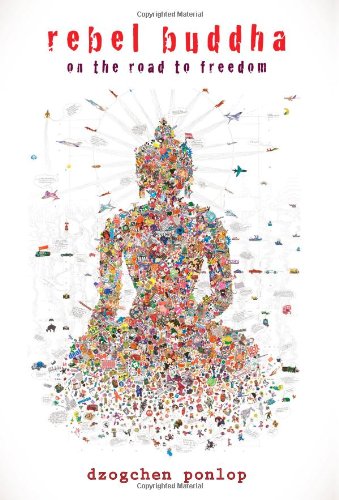 Can we strip a gilded statue or blow away incense?

Dzogchen Ponlop, raised in Sikkim by Tibetan parents, educated at Columbia and in Canada, living in Boulder and now Seattle, represents a teacher who may be more comfortable smoking outside a Starbucks and chatting with passersby about personal fulfillment.

Ponlop is no guru expounding upon esoteric doctrine from a shrine room. He argues for Buddhism removed from the Asian decorations that cloak its power. He presents an accessible program of self-liberation from mental constructs and religious dogma, while expanding upon two lectures that present dharma teachings with nearly no Buddhist vocabulary or Tibetan references. He explains how Buddhism in a globalized era demands freedom from exotic rituals, colorful trappings, or hidebound formulas that hold back both jaded Easterners and gullible Westerners from the essence of what the rebellious Buddha taught as a science of the mind.

Coming from the Himalayas, Ponlop finds that his northeastern Indian childhood prepares him as another global citizen. As a younger lama, he enters the diaspora that has spread Buddhism far from its homeland, and he advances it as a practical method to ease modern anxieties. Distrusting outmoded forms of outward conformity to Buddhist tradition that may have exhausted their initial energy, Ponlop looks to the mind as the place to overcome confusion.

He re-orients the path to freedom, the way that follows Buddha’s ancient and time-tested map, as aligned with samathi-vipassana (calm, abiding-insight) meditation grounded in analytical forms of philosophical training. Self-discipline, meditation itself, and a shift to higher knowledge characterize his model. No easy solutions arrive. Practitioners “have to ask all the questions and find all their own answers.” Unlike religious methods, Buddhism as a non-theistic approach demands that one observe, test, and verify the truth of what is suggested before a deeper understanding within one’s mind arrives.

Ponlop makes the analogy with a prisoner finding liberation; analytical meditation reveals insights “because we’re seeing into what we’re examining at the same time.” Logic and reason, contrary to what many may think Buddhism advocates, serve as the foundation for self-inquiry. Undoing the causes of one’s suffering makes this self-analytical and then self-dissolving meditation a rigorous, recuperative therapy rather than an indulgent, navel-gazing posture.

He keeps his readers centered in the everyday realm, not on the monastery or temple. He insists, after 50 years of an emerging Western Buddhism, that the imitation of Eastern postures and prostrations need not remain the norm by which Asians or Westerners judge their application of the dharma to contemporary reality. He moves one’s attention to the mundane, where true enlightenment waits, admonishing readers not to expect wisdom to dawn only in a sylvan retreat. He encourages his audience to seek opportunities for advancement whenever they arise.

“Look at your mind when you wake up in the morning and discover that there’s no milk for your coffee, it’s raining again, the car needs gas, and your kids have the headphones on and are refusing to speak to you. In that moment, where is your equanimity, your compassion? If you need reminders that will urge you toward practice, you can easily find them in your own life.”

Later, Ponlop recounts a lecture which confronted the necessity of shifting the boundaries of what his listeners conceived as acceptable Buddhist practice. He started this narrative promising “a culturally stripped-down version of the Buddhist spiritual journey,” and he ends it dismantling a “scarecrow dharma,” defined as the symbolism of the tattered garments of a culture too caught up in outward appearance rather than internal dynamics and risking paying homage to a stuffed simulacrum of what once was a vibrant, energetic message of renewal.

Rebel Buddha is filled with comparisons and analogies to illustrate his mindset. He speaks about working on an assembly line, visiting Disney World, and “hiring a bad hitman.” He suggests moving the dharma teachings through another reboot, to refresh the tired system, and to purge it of malware and viruses. He seeks to reclaim the living tradition behind the ornamentation, the mantras, and the distractions.

The results in Rebel Buddha can be uneven. Cultural adaptations for Western Buddhism are assumed more than discussed, and the conflation of the two lecture series can be awkward as appended and revised here.

Ponlop fails to elaborate upon as much of the cultural and especially political renewal that the original Buddhist ideals encouraged as he indicated at the outset. This book may, as its contexts show, work better for those already grounded in basic dharma teaching, although given the lack of “Buddhist” terminology throughout, contrarily it may be more accessible to those uneasy about a more explicitly stated conventional primer. An appendix offers brief advice about meditating; this overview may motivate hesitant or brave readers to try out Ponlop’s down-to-earth, non-dogmatic, and gently encouraging strategies.

Ponlop recalls how the original Buddha dared to reinvent and remodel what were revolutionary teachings for his era. He suggests that his listeners start by reducing the pressure of culture, of the “clothes and paraphernalia of another time and place.” Ponlop steps away from a tradition he respects, as he does not worship it blindly. He tells his readers to begin “throwing out our cultural cushions” and to stop “clinging to our identity as Buddhists.” Why not, he wonders, “begin again by simply sitting in an empty room with completely white walls?”

His editor sums up Rebel Buddha as “a precise rendering of the spiritual journey that focused on the internal experience of the traveler rather than its philosophic underpinnings.”

While the text may appeal more to Buddhists than skeptics, the even-handed approach that Ponlop takes toward dismantling the structures of Buddhism to let their original force emerge speaks well for his mission. He brings from his Asian upbringing into his Western livelihood a relevant interpretation of Buddhism that anybody can understand.

This may be a version of the dharma less recognizable by its lack of incense and gilt, but it may prove far more applicable by its minimalist, portable, and commonsensical ideas rooted in urban life, and in self-analysis.