The Story of Ireland 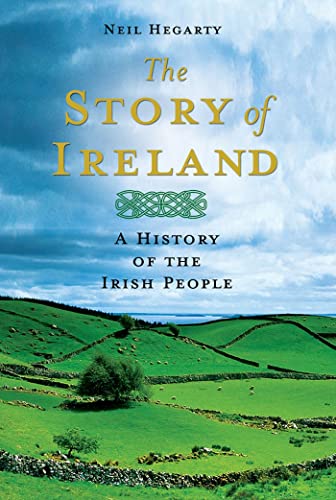 “In a history illustrating the importance of global ties for the Irish, its links to a European economy facing unprecedented challenges by its own unity serve as a cautionary tale: to be careful what a vulnerable, secularizing, and newly affluent nation wishes for.”

“Incorrigably plural” in its diverse history, Ireland has never been as isolated as its geographical position may indicate. Dr. Neil Hegarty links the island—from its prehistoric pioneers to its European financial bailout—to the wider world. International connections, from its first settlers to its increasingly multicultural population today, characterize its gene pool, its waves of invaders and immigrants, and its complex mix of political, religious, and social ingredients.

These may simmer, then boil, then cool down again and again over long centuries full of contention and compromise. This energy, distilled into this well-informed study, pulses through every event listed in 330 smoothly paced pages (along with a lively introduction by foreign correspondent Fergal Keane, a timeline, footnotes, reading list, and detailed index).

Contrary to nationalist myth, the Romans traded with and tentatively explored a bit of the island they named Hibernia, ”land of winter” from a mistranslation of the Greek “Ierne” for the eponymous Celtic mother goddess ”Ériu.” Ireland never was totally hidden from classical explorers who braved the Atlantic. “The sea remained a communications highway: indeed in a country cut with forest, highland and bog, it was sometimes easier to travel abroad than within the island itself.”

This oceanic network drew a few of its residents into the Christian sphere before Patrick arrived, and Dr. Hegarty reminds us how far Irish influences spread throughout Europe. One determined “dissenter whenever necessary,” irascible monk Columbanus took learning into the Alps, while Hiberno-Norse civilization, in Dr. Hegarty’s emphasis, arguably strengthened by urbanization and commerce what it had first weakened, when many monastic storehouses of learning perished along with native caretakers and refugees during Viking raids.

Brian Boru, conniving High King, comes across here as less heroic and more cunning in his ruthless consolidation of power, as not for the first time the Celtic Irish and their Norse rulers fought together as well as against each other amidst a host of mercenaries— depending on who was paying whom to enlist not on behalf of a nation but a warlord.

Such allegiances tangled when the Anglo-Normans took advantage of taking over the tribal island to the west, invited by an adulterous local chieftain needing armed backup. Dermot MacMurrough, typecast as the traitor in many a legendary version of the Irish past, here does not come across as sympathetic, but his headstrong character is placed within a territorial feud familiar to viewers of a mob drama today: fractious Ireland with its petty kingdoms produces such as Dermot, with a vicious ”style, rooted in a political climate that was positively Sicilian in its intensity and nastiness.”

The Normans entered Ireland in 1169. These occupiers pushed aside the Hiberno-Norse and their ports fell, as the “Pale” of English control expanded inland from the island’s east and southern coasts. Then “Old English” settlers succumbed to intermarriage and assimilation, so the Crown reasoned they must send more loyal invaders to anglicize the people lest the land ”develop into a safe haven” for ”rivals and enemies” using Ireland as a back door to sneak into England, so as to undermine or overthrow London’s power.

Over and over, more invaders were sent as the natives fought back, infiltrated the earlier colonists, and persisted in their anti-English opposition. Dr. Hegarty tells this intricate segment with vivid excerpts from chronicles and laws, and as throughout this book, he incorporates poems, testimony, and historical footnotes now and then taken from solid scholarship and up-to-date research.

Oliver Cromwell, another “polarizing figure” whom the native Irish learned to fear, gains thoughtful consideration. His atrocities are not excused, but his position as a Puritan bent on wiping out the Royalists in Ireland during the English Civil War places him as likely an inevitable military leader sent over to wipe out an insurgency, a general convinced of his anti-guerrilla campaign’s necessity. His “ferocious ideological clarity and moral zeal” illustrate one of many case studies, over eight centuries of anti-British insurrection and cultural resistance. Catholic natives press back and are pressed back; both sides refusing to give quarter during frequent rebellions, often with Irish employed on each side.

Gradually, the indigenous language and the clan dominance weakened until by 1700, four-fifths of the land was owned by the English. Penal codes crushed Catholic freedom in a climate of “shrill paranoia and beady-eyed realism.” A century before, Scots were planted in fertile but headstrong Ulster as Catholic landlords were driven off, or enticed to convert to Protestantism to keep their diminished holdings. Presbyterians, also oppressed by the Church of England, might listen with sympathy to the 1798 rebels seeking, in the aftermath of the American and French Revolutions, their own victory.

But after another defeat, the Famine would devastate the native population. This sparked a “devotional revolution” by the Church designed to rally survivors. When Fenians sought to continue the tradition of rebellion, by the late nineteenth century, the hopes of political union with Britain had long been proven foolish. Fewer Protestants would entertain the notion of better times for an Ireland under Catholic power. As a garrison state, it had supplied—from the better off and the poor—over 40 percent of troops serving under the Crown abroad. Imperial ties again would stir fratricidal strife back home.

Politicians found themselves unable to convince Britain of Home Rule as a dominion solution for a measure of Irish self-determination. Isaac Butt, a Protestant barrister, “was intellectual, respectful, careful, uncharismatic, dour and unexciting—in short, lacking in many of the qualities that appealed in Irish political circles.” As that phrasing shows, Dr. Hegarty demonstrates a command of nuance.

I wondered if he’d miss an observation or qualification, but he never did. He writes for a wide audience, yet by academic training he keeps his detached, thoughtful perspective when addressing contested issues. For instance, he adds to the usual summation of Belfast’s sectarian fears of a takeover by Home Rule (let alone Fenians) the progress in scientific endeavor and economic productivity achieved by Ulster’s main city by the reign of Queen Victoria, as expressed through a typical Protestant refusal to countenance any “parliament in Dublin in thrall to a host of clerics.”

The Boer War earns in-depth treatment to show the inconsistencies of such reformists as Michael Davitt. Despite all his sympathy for Australian aborigines and the Maori, Davitt remained silent when considering the plight of the native Africans as he and many Irish nationalists propagandized and supported the Boers against the Crown.

Of course, many more Irish signed up to fight the Boers. Even if an “international consciousness” by modern times defined Irishness as Catholic and anti-British, many families relied on the payments sent home by soldiers to those who endured in poor, limited, and overpopulated conditions. Out of such discrimination and division, the last century’s record of Irish fighting Irish begins its long litany of casualties and conflicted loyalties.

Nationalist Irish politics tore itself apart when allied to rebellion. However, after the doomed Rising of 1916, this glorified alliance was judged by enough bitter and beaten-down citizens as a desperate if timely necessity. By then, “Sinn Féin” republicans had convinced enough sympathizers that the Crown would never grant independence peacefully to what the imperial occupiers and a pro-British minority feared as a credulous, resentful, and nearby island that opened a ”back door” to “Rome rule.”

While these rebels claimed in rhetoric their socialist ideals and nonsectarian policies for all Irish, in practice, the majority of the divided island that resulted turned in on itself by censorship, repression, and moral panics designed to make it more Gaelic and more Catholic, as liberals fought to be heard in an increasingly conservative Free State. Still, facile portrayals of independent Ireland as cut off from European and certainly American culture are denied.

Dr. Hegarty reminds readers how dependent on wider currents of trade, ideas, and influences the Republic of Ireland has been. He examines the economy within the subsidized counties remaining, after yet another protracted conflict, under the Crown. At least, this Derry-born observer adds, in Ulster the “prevailing political uncertainty and civic abnormality kept house prices low and living conditions high” during the Troubles of the past decades.

Finally, the boom and bust of the past 20 years earns Dr. Hegarty’s hope that a “sturdier civic culture” may be created to replace the “short-term, patronage and clientist politics” that led to the disfigurement of much of the Irish countryside with unplanned development, and a bubble where Dublin’s real estate inflated into the world’s most expensive.

In a history illustrating the importance of global ties for the Irish, its links to a European economy facing unprecedented challenges by its own unity serve as a cautionary tale: to be careful what a vulnerable, secularizing, and newly affluent nation wishes for.

As he concludes, “old pieties, myths and habits of deference are dissolving.” What replaces these certainties, Dr. Hegarty insists, will be decided upon by the diverse people of Ireland themselves.