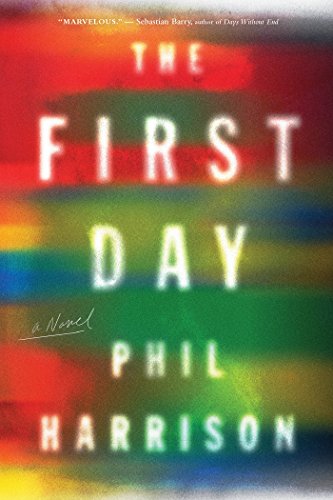 “The stories told by this voice fill in much, but not all. Limits to complete understanding persist, in the city of Belfast and in Samuel Orr's family.”

Samuel Orr preaches on East Belfast's streets. There "he spoke only the scripture, no commentary, no opinion, no interpretation. No pleading." On the south side of the city, another resident elaborates on her chosen texts. She pursues another Samuel, surnamed Beckett. Anna Stuart "lectured her groups of avid nihilists while looking" from her classroom high up among the red-brick facades of Queens University, "at people scurrying far below, like insects." Phil Harrison sets up his protagonists as he begins The First Day. His examination of faith and the tensions it creates and confronts engage the reader who enters into this novel. An award-winning filmmaker, he turns to fiction for his print debut.

As a Belfast native, Harrison scrutinizes "a city without roots." Rather than drawing sustenance from the earth, this place rejects security. "Flags, history, tradition, they all take light from the world and bury it." Where this perspective emanates from is not clear.

Beginning in 2012, the setting for this story sours its residents. Those raised by the "1986 generation of nay-sayers" of "No Surrender" grow up "just as militant, though with less to lose. A decade of unimaginative leadership, of reconciliation attempts built around 'telling your story', served for the most part merely to trap people in the failed myths they'd grown up with rather than encouraging them to abandon them for bigger, messier ones."

This judgment resonates. Its speaker will be revealed as another victim of this entrapment as it passes down from the sins of the fathers. The stories told by this voice fill in much, but not all. Limits to complete understanding persist, in the city and in Orr's family. For quite a while, readers may remain unaware of who narrates, nearly omniscient, during much of the first half. Harrison slows this pace.

An authorial decision that may startle some embeds itself in the early prose. For the King James Version in all its poetry and power flows through Samuel Orr by habit and by vocation. His stream of consciousness fills with biblical cadences, verbatim from the Good Book. Orr, as a congregant regards him, "seemed to have an ability to make it all about him, to turn the scriptures into biography." Furthermore, the listener to Orr's sermon observes, that obdurate lay minister "yet did not actually do anything; he merely refused to change, to be anything other than his flawed, blunt self."

Like many an Ulsterman, Orr resists sentiment. Harrison keeps him at a distance. Orr's his most potent presence, and when he recedes, his creator plays it safer. Anna's predicament moves Orr, first to passion but soon to estrangement. Their son, also christened Sam (the triple nod to this prophetical nomenclature makes one wonder how necessary is this choice by the writer), must deal with his brother by Orr's wife, twelve-year-old Philip. (The author gives this foil his own first name.) That older boy is saddled with a burden. His father's actions in engendering a sibling only half a brother rankle Philip. He, the narrator defines, "became continuation, the past blurred into the present."

Here, the predicament of many in the Irish North hardens the young as it has the old for centuries. "It was like the story they told children: if you pull a face and the wind changes direction it stays that way forever." Philip's determination to thwart both his father and the lad he has produced creates the storyline that takes three-quarters of these pages to work itself out. This presumes a reader's patience.

For Harrison resolves to move Philip into a key scene that will affect the narrator and this account. As with the naming Harrison chooses to grant central characters in The First Day, so with this pivot. It smacks of too neat a scheme. Perhaps in film this could be carried off adroitly. In fiction, it calls attention more to the author than his antagonist.

However, the narrator does reveal necessary sentences (in more ways than one) necessary for the scheme to be at all credible. "Philip had an extraordinary skill of carefully unpicking a person's weakness, of paying attention as much to what they didn't say as to what they did." He teases out the repressed and unravels what others labor to hide. "And he had that rare absence of compassion, a preparedness to use whatever he could get his hands on for his own ends." Certainly this foreshadowing follows through on that narrator's portent.

The crux lies in the ability of Philip to convincingly carry off what Harrison wants him to see through. Orr opines that his older son's "genius" evinces itself by Philip never stepping out of his role. He's "like a method actor who finishes work on a film and forgets to return to his normal life."

The novel's later half shifts the chronology 35 years later. Surprisingly, The First Day does not attempt to create a future New York City much altered from today. Gentrification turns into its own parody; artisans consume themselves. This may have already happened, one may aver, by 2012.

As a museum guard, the narrator inhabits a potentially rich setting for an inventive storyteller. Phil Harrison, once more, does not attempt to expand this as much as readers might expect. Instead, the narrator has to "find my own corners, my periphery." He rationalizes this as a better option to the dour conditions that have dampened his upbringing. "Darkness as character—the unknown not as absence but as a space to grow into." These marginal haunts, inevitably, echo those of Sam Beckett.

The First Day succeeds when it plunges Orr and Anna into their own Irish-based predicaments. When the narrative resumes across the ocean, it diffuses. Family secrets, betrayals, punishment and redemption add up to familiar tropes. The promise of the opening chapters, full of the addled and stubborn Orr's KJV compulsions to channel the prophets, and Anna's desperate confusion as she faces the joys and sorrows of motherhood, fades. The narrator trots adroitly at its start. When the story turns to New York, too much has been left unsaid and hidden for its revelations to excite its readers. What could have accelerated into a dynamic climax idles and glides into too rapid a resolution.