God in Proof: The Story of a Search from the Ancients to the Internet 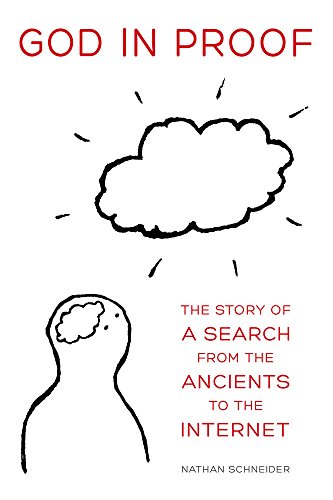 “As a popularization of recondite argument, God in Proof mingles accessible explanations with a reporter’s fresh outlook.”

Not yet 30, this “millennial” journalist ponders reason and faith. He combines his personal quest with a philosophical investigation from the Greeks to the Internet. He reminds us of the Latin root for proofs: probare derives from probing, the testing of the evidence, rather than a compulsion to settle the dispute. The distinction, lost in English, clouds what Nathan Schneider’s own perspective seeks to clarify as his rationale: The quest matters more than any empirical truth-claim.

With a father who drifted away from Judaism for a skeptical outlook and diligent medieval research and a mother who left Christianity but looked to a guru for comfort, Mr. Schneider, coping as a teen with his parents’ breakup, characterizes his generation’s pull away from religious convention; individual ambitions contend against cultural solidarity.

An editor at Killing the Buddha (an online “religion magazine for people made anxious by churches”), the author speaks for many Westerners eager to sample from exotic or indigenous as well as European or Middle Eastern traditions, and he neatly mingles reflection with analysis.

He even doodles diagrams or cartoons along a few pages, as if a professor wanting to relate arcana to his class in quirky, engaging terms, as if fearful of coming across as too earnest. For those coming for the first time to advanced concepts, he offers tables and indexed appendices charting ideas or thinkers as more accessible data.

For instance, an “incomplete list of proofs” classifies about 50 variations on for/against theories as cosmological, dialectical, historical, ontological, phenomenological, sociological, teleological, or transcendental.

Certainly this broadens the usual range of what the textbook I teach Comparative Religions from must sum up in paragraphs for but three summary proofs. As a popularization of recondite argument, God in Proof mingles accessible explanations with a reporter’s fresh outlook.

Anselm, Augustine, and Aquinas as expected all appear; but this stretches from “A” for a website from Atheists of Silicon Valley to “Z” for Zora Neale Hurston’s novel Their Eyes Were Watching God.

Nathan Schneider blends a chronological tour of theories into his own maturation smoothly. The ancients parallel his childhood wonder; theological debates by Spanish Muslims and Arabic-speaking exile Maimonides merge with reflections from Mr. Schneider’s college course in Islam and his father’s attenuated Judaism.

For a high school independent study project, Mr. Schneider managed to stay three weeks in a Virginia Trappist monastery, where his own doubts, he finds, long precede his visit. A monk confides: “‘Well, of course, Nathan,’ Benedict told me. ‘We all doubt. We question.’“

With the early modern thinkers, the shift in the search pivots from God to the self as the starting point. “God’s existence was a reality for each person to discover.” Leibniz, Spinoza, Pascal (too rapidly examined), Locke, Kant, Hume, and Hegel follow Descartes’ pioneering innovation.

As a philosopher, he peered forward and into the intellect by logic, rather than following the vertical gaze of the theologian who guided the intellect up until aligning with the soul, to heaven by the human.

The parallel of the historical search for proofs from here on must diverge from his analogy with his life, as he enters his twenties. Uncertainties loom and verities fade as his coming of age models in miniature the evolution of contemporary thought. While an adolescent conversion to or away from God often “sets the mood, or stirs the muck,” affirmative or negating proofs tend to be fabricated by these same thinkers in middle age.

The author’s cautious conversion during college to Catholicism contends against his doubts, and his fluent if sometimes too compressed investigations of what others think about God play off his summations of the increasingly assured humanist challenges to theology.

Science enters to tip the scales, and “growing pains” of the modern mentality reverberate with Mr. Schneider’s personal explorations of the varieties of verifiable arguments for or against God.

As he quotes Richard Dawkins: “Darwin made it possible to an intellectually fulfilled atheist.” Arguments crediting a Creator with the world He designed could be replaced by those that shut religion out of natural evolution. Yet many in the past century and a half reconcile a less literal take on Scripture with Darwin’s theory.

Mr. Schneider peers askance at creationism, intelligent design, and a fervent Turkish version of insistent attempts to equate creation to art, God as the only artist.

Dawkins’ cocky neo-atheism introduces a chapter about “human progress and divine absence.” Previous debates concentrated on manufacturing better proofs for God. Exposure to global cruelty and cultural diversity, explanations for nature that don’t include God, and common experiences such as Mr. Schneider’s with “mixed marriages and religious shopping sprees” mean that not only seekers but believers may increasingly turn restless. Whether God exists turns a question bold enough to ask.

Christian philosophers, emboldened by the “free-will defense” of Alvin Plantinga rally against the secular majority in academia, and they respond boldly. As with the case of Anthony Flew—who famously has been claimed by his friends late in his life to have turned back to a qualified, careful theism—contemporary scholars labor against prevailing skepticism. Mr. Schneider offers a patient, sympathetic ear to their counterarguments, although he admits they remain very much in the minority.

Compared to their American colleagues with Christian convictions, British professors in the philosophy of religion such as Oxford’s Richard Swinburne simplify. He posits “an infinitely intelligent, immaterial God” as a more probable metaphysical solution for our intricate universe. Whatever side of the Atlantic, funding comes for such endeavors from the “bigger-than-the-Nobel Templeton Prize and the multibillion dollar John Templeton Foundation” founded by an American WWII profiteer turned globalizing investor and British citizen, knighted for his philanthropy.

Grants for “humility theology” emphasizing spirituality in places such as medical school and projects convening physicists alongside theologians convince many “that the existence of God can be a respectable question for science after all.”

Fine-tuning the universe with the Big Bang theory--or weighing it against a multiverse in one Templeton sponsored meeting--encourages those funded by its grants. Mr. Schneider notes how such “undecidability” in the interpretations quantum physics and dueling cosmologies debates resembles “ultimate truth” as popularized by an eccentric range of New Age as well as scientific contenders. This soundbyte crowd may marshal evidence as if based on “the ink blots in a Rorschach test.”

Justin Barrett, an American psychologist, proposes another pattern for our recognition: evolution to detect a rustle and assume a tiger behind the bush, and a God behind the stars. This “hyperactive agent detection device” resembles a suggestion propounded in Hume’s Natural History of Religion over two centuries ago. Barrett’s studies for three years at Oxford garner assistance from a nearly four million dollar “cognitive science research grant.” Sparked by such synergy, a “proof industry” booms.

In my own native terrain, Southern California, Nathan Schneider fingers the “cutting edge” of America’s “mass-media marketing and celebrity apotheosis” sharpening Christian truth-claims against the New Atheists slashing advances in the past decade. He notes that Dawkins (along with Daniel Dennett, Sam Harris, and Christopher Hitchens) tends towards rushing past “the proofs for God’s existence” so “to be finished as quickly as possible.”

Stretching out what seems an eternal conflict, apologetics sideshows debating against rationalists fill lecture halls. “It brings in the ambivalent, the undecided, the apathetic, and the true believers alike. If nothing else, it’s a good show.”

Blogs and YouTube sustain this energy, on both sides. At the Evangelical Philosophical Society’s conference, Mr. Schneider shrinks from “apparently flawless steps that human reason inclines towards a God who is so pathetically like ourselves.”

Nathan Schneider patiently sifts through many steps and stands, unsurprisingly, to pause near the end to reflect in typically clever, yet honest, humble fashion. “The unexamined life is not worth living, nor the unexamined God worth believing. I remain, thank God, no less than ever a question to myself, and God remains a question for me.”