Where I’m Reading From: The Changing World of Books 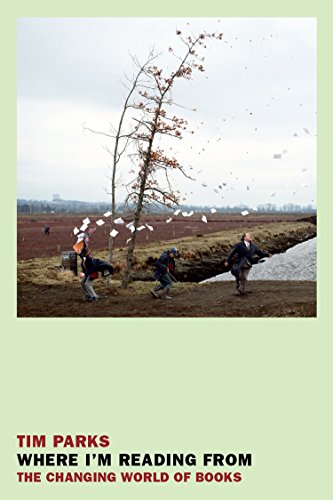 Echoing a title of a Raymond Carver story collection, Tim Parks names his own collection tellingly. Over three dozen brief, interlocked essays confront how contemporary authors increasingly write in "the changing world of books" for an international market. Where they are coming from, therefore, fades; where they aim at, outside of their native language and distinctive culture, looms large.

This rankles Parks. After college, he moved from England to Italy in 1981. He married and raised his family there. He is ideally placed, as a professor of translation in Milan, and as a prolific novelist and a critic for the New York Review of Books.

His memoirs of life in Verona, the education of his children, and his explorations of Italy by train widen our insight into his adopted land. "Reading It Wrong" here offers a glimpse at how his Italian students tend towards "slippage," transferring their innate mindsets into their versions of D. H. Lawrence. More such comparisons and contrasts, from what Parks labels from his previous texts mediating Italian mores for Anglophones as "ironic anthropology," would have deepened this book's contexts.

Parks prefers to roam abroad for intellectual stimulation. He marshals Gregory Bateson, Christina Stead, and Henry Green, for example, as well as Thomas Hardy, Samuel Beckett, Philip Roth, and Virginia Woolf, to exemplify worthwhile predecessors. He dismisses a few of their successors, such as "know-it-all" Jonathan Franzen. Parks distrusts literary festivals and creative writing programs. He wonders why so many M.F.A. products of such churn out narratives of failure and novels of idealism.

Recent authors, he suspects, peddle expectations that writing about sex and violence can prepare readers for the real-life shock and intensity of these encounters. Parks resists this. Provocatively, he advises that the "power of narrative to shift or at least threaten our attitudes" may cause us to wisely "avoid certain books as unhelpful" at crucial periods or vulnerable moments in our lives. This may be a surprising judgment from an author or a critic, but it demonstrates Parks' contrary or clever stance.

Even on issues as theoretically dry as copyright, Parks sustains a thoughtful reaction. "The lapse of copyright is a concession to the author's dreams of immortality at the expense of the family."

He examines the debate as technology weakens an artist's hold over one's creative production. "Can one really expect all countries to defend the rights of foreign authors, when the majority of international bestsellers come from half a dozen countries and overwhelmingly from the United States?" This is not a marginal subject. Where one writes and reads from plays into this collection's greatest concern.

Translation for a global market leads to loss of the indigenous, and a profitable gain in "universal appeal." Parks argues how authorship grounded in the here and now faces erosion. Storm threatens. Akin to "a Hollywood costume drama or indeed an extravagant computer game," these "well-established, globally shared tropes" may wipe out narratives locally based, now endangered by trade.

He hints at a related shift in his Italian Ways, where the rail system proved a test case for exposing a nation's distinctive attitudes. There, he charted how Italian itself syntactically has begun to shift toward English models. Parks does not use the linguistic terms code-switching or calquing or creolization. But these impacts are evident.

This clash reverberates. For Italian writers, and those of many languages, must struggle to choose. They may remain voices for what distinguishes them from the global herd. Or they may make their prose simpler, their references generic, and their plots easily translatable into corporate contracts, where English offers lucrative royalties and media adaptations.

Parks does not focus much on Italian writers. His two previous anthologies of essays, mainly book reviews collected in To Hell and Back (2002) and in The Fighter (2007), critiqued some of them. (One small absence persists. If indication of when these pieces were written was inserted, and if data as to their previous publication were appended, that would help a reader appreciate their formation.)

Parks takes pains, still, to arrange the contents so the short essays carom off of one another. This deepens their impact on the reader as the pages accumulate. While the essays gathered in Where I'm Reading From tend to be much briefer than his reviews, they approach epigrams by their terseness.

Terse also characterizes the tone Parks takes. He sounds rattled by the capitulation of so many of his fellow authors towards giving in to the multinational corporation with its tempting crossover tie-ins. Therefore, a pair of later essays offers slight hope for the idiosyncratic and the innovative mavericks.

Giacomo Leopardi's Zibaldone (1817–1832) itself has a title that refuses to escape its origins, as if a indigestible "hodgepodge." Leopardi compiled philosophical reflections into almost 5,000 pages of handwritten entries. These in mood anticipate his near-contemporary Schopenhauer as well as later curmudgeons such as Beckett, Thomas Bernhard, and E.M. Cioran with their "gloomy content and emphatic style."

One closes this collection convinced Parks, despite his gloomy tendencies in evidence in abundance throughout this slim volume, will channel his own emphases by a style capable of rousing the peculiar, headstrong, and quirky creative talents who stave off sameness.